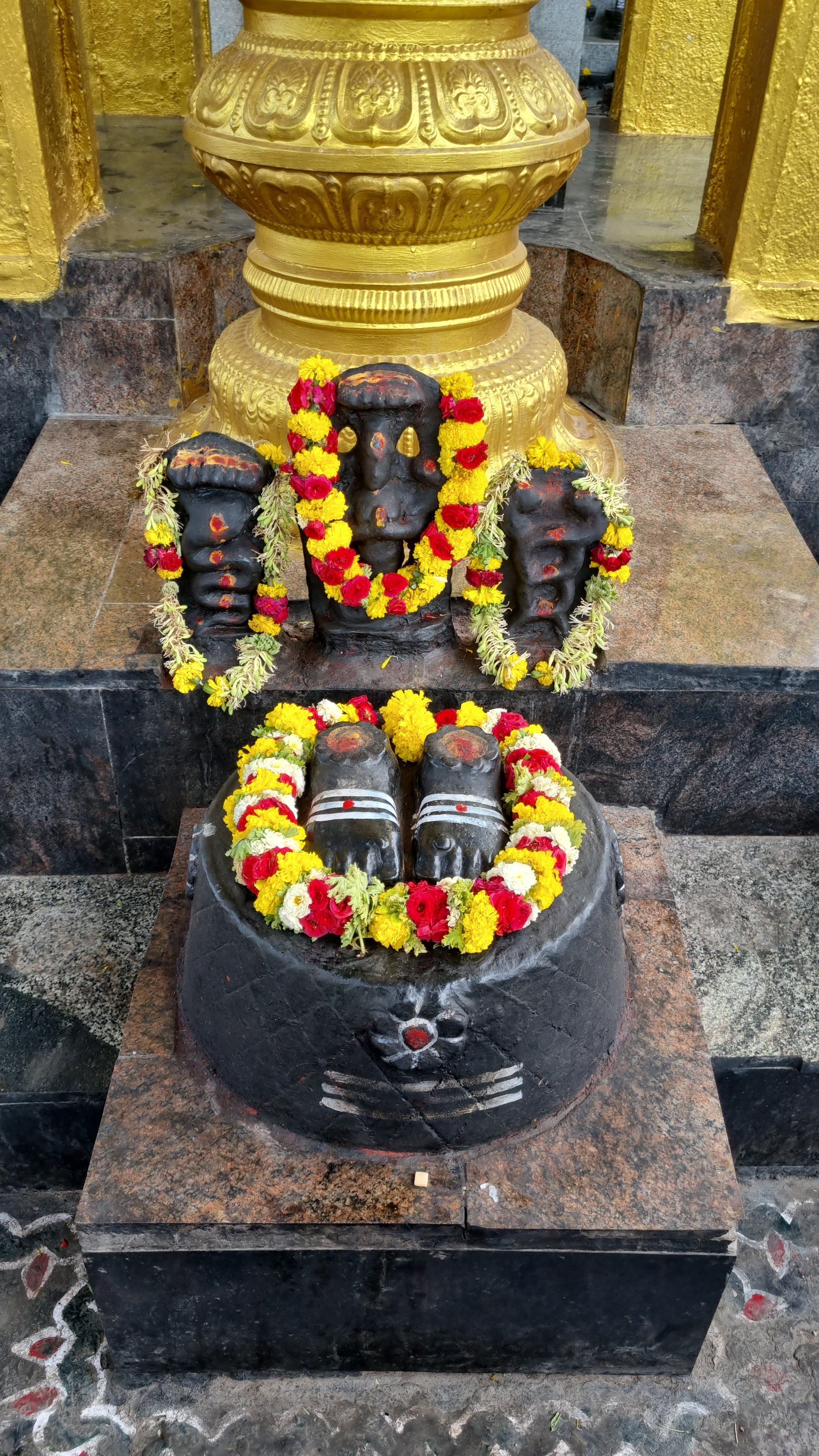 A picture that perfectly encapsulates our biking trips – open skies, lots of nature and jazzy outfits.

After becoming owners of a majestic Triumph Tiger 900 cc recently, Animesh has been on the lookout for weekend trips from Bangalore.  Every once in a while, I also accompany him.  I’m not a fan of speed or big bikes – but I love me a short trip .  So when my friend Sowmya added us to a WhatsApp group to plan a weekend trip, we immediately jumped at the chance. We packed a small backpack for our day trip to the Kotilingeshwara Temple.

The temple is in a small town called Kammasandra in the Kolar district of Karnataka.  Kolar is about 2.5 hours from Bangalore and the route is scenic and beautiful.  Riding a bike certainly has an element of adventure, and literally gives you a different view than in a car.

Animesh and I had never heard of the temple, but a quick Google search showed us that the temple is the site of the largest shivalinga in Asia.  The linga measures about 108 ft and there’s a huge Nandi bull installed in front of it.  A 108 ft shivalinga is hard to imagine…until you’re about a kilometre away from the site and can see it looming above everything else in the vicinity.  As we approached the temple, it was clear that they were used to tourists.  They ushered us in to the ticket counter – where we purchased tickets for Rs. 20/- each.

The temple is also believed to be the site of the most number of shivalingas in the world. ‘Koti’ is the Kannada word for 1 crore.  1 crore = 10 million.  We didn’t know this when we visited the temple.  We thought the temple contained 10,000 shivalingas.  But as we walked around and saw that there were shivalingas as far as the eyes could see, we realised that there must be more.  Animesh did a quick calculation and determined that there were at least 50,000 lingas.  Now we know that there were 10 million of them, in all sizes and one was even white.

As usual, Sowmya and I tried to find information about the temple from any priest who would deign to talk to us.  One of them told us that the number of lingams grows every day as people make votive offerings to the temple in the form of shivalingas.  The cost of getting a shivalinga installed is Rs. 6000/-.  As we walked around we saw that many of the lingas were covered with haldi and kumkum, which means many people return to pay obeisance to the shilvalingas.

The temple itself is quite modern in its outlook.  There are neat lines to get into the main building, and the priest will ask you your name, your family name and names of anyone you want to pray for; and proceed to chant a few shlokas for your wellbeing and for your wishes to come true.  For Rs. 100/- you can do a special puja for Goddess Annapurna as well.

Something riveting about a while Shivalinga in a sea of black ones.

Shivalingas as far as the eye can see.

The beautiful scenery you encounter on road trips in Karnataka.

Here’s another blog you might enjoy, from my trip to the ancient Perur Pateeshwara temple in Coimbatore.