A Chat with Abhijata Sridhar 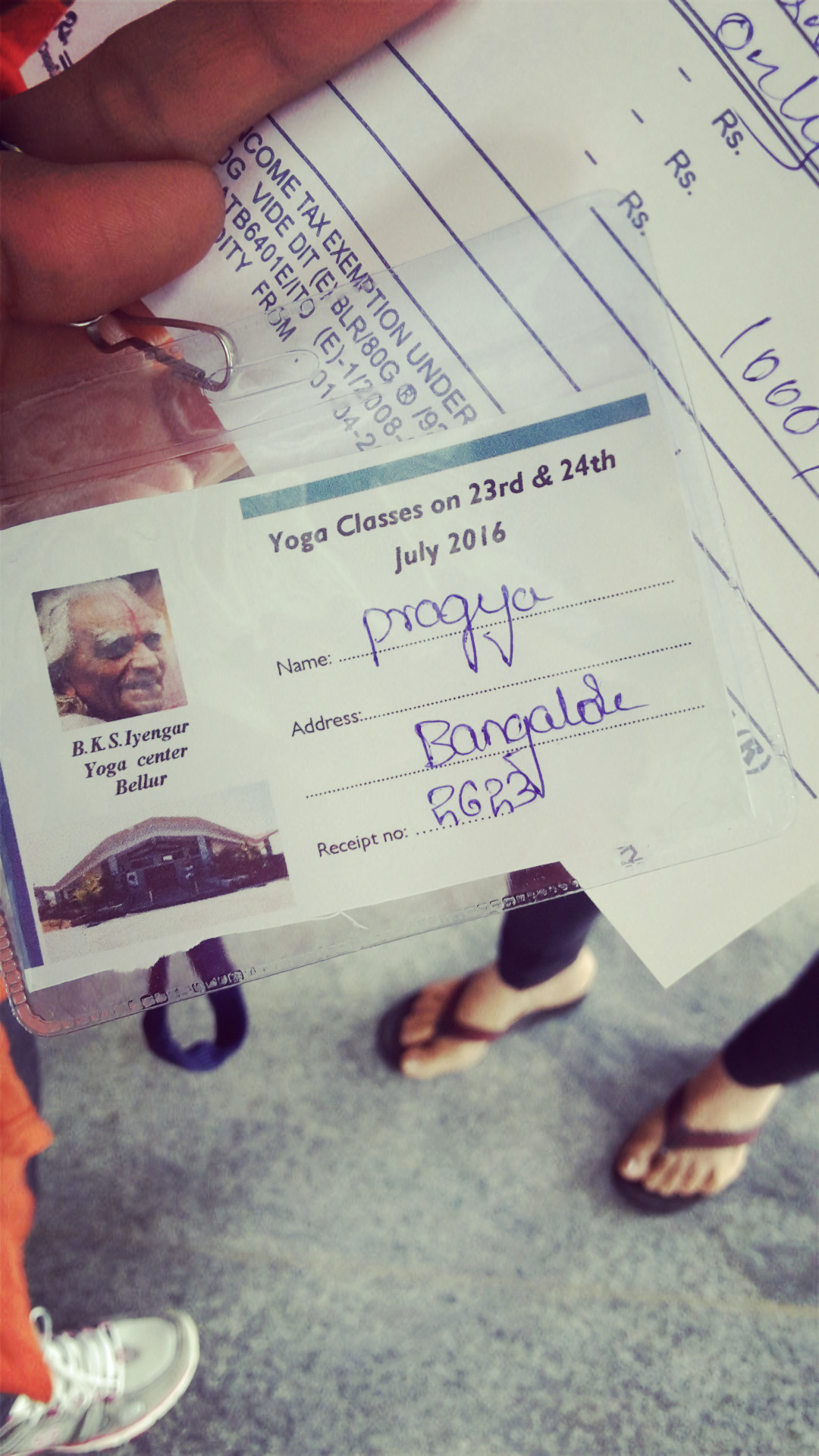 Those following my Facebook updates would know that I attended my first Iyengar workshop last weekend.  I had been looking forward to the workshop all month.  Turns out, the workshop became special for me.    It was conducted by 3 senior Iyengar teachers.  It was held at Belur, BKS Iyengar’s birthplace.  Iyengar teachers are legendary for being strict and no nonsense.  So when, at the end of the first day I came up with the idea that maybe I could do my first ever interview for the blog with one of the most famous yoga teachers in the world, I didn’t think it would actually happen.  But it did!  And I was kicked.  Below is the interview.  At the end is the link to where you can hear it on YouTube. 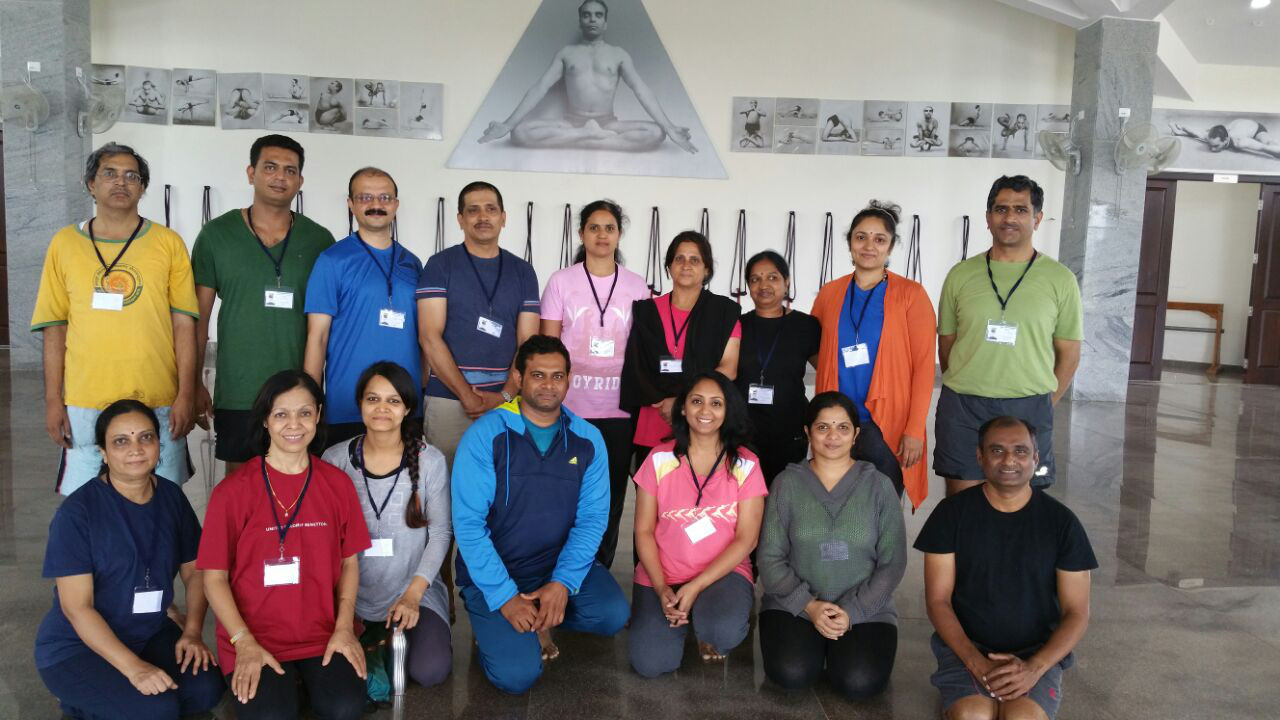 PB: Hmmm..ok..alright..and do you agree that, you know they say that when a student is ready then the guru appears.  So and…I feel that is sort of taking away responsibility from a student, like y’know you just keep on doing your work and the guru will come on their own.  But do you feel for students today who are seeking something more from the practice, do you think they should go out and actively look for a guru or do you feel that they should just wait and when they are ready the guru will appear. 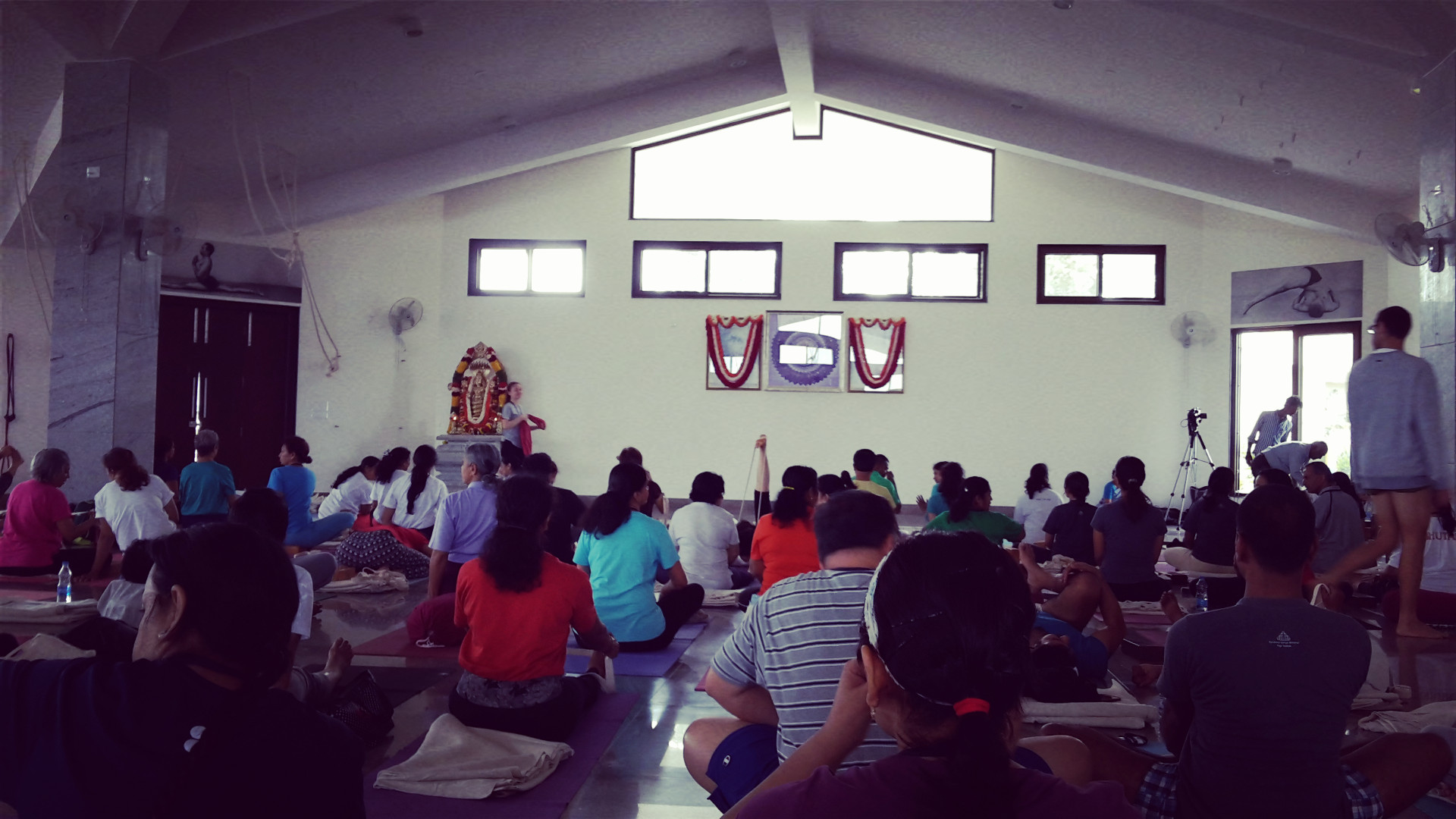 AS: Ah….I’ve been lucky to have had my guru (laughs again), so I don’t think it will be fair for me to answer this question because fortunately I was lucky enough to have been born in this family and to have been taught by him and by my uncle and aunt, Geetaji and Prashantji too and then Guruji became my guru.  So yes, in a sense you cannot make a guru, but yes a guru appears it is true in one sense, but at the same time you can’t expect someone who is teaching you a subject to be a teacher and then somebody just comes and  there the guru has appeared.  I think a teacher transforms to becoming a guru, a student transforms into becoming a shishya and it doesn’t happen so easily, it’s not so easy. (starts laughing)

PB: And so that’s another question I had for you, when did your grandfather, he was your grandfather and then what was the moment when he became your guru?  What was that transformational moment for you when you realized that ok this transformation has happened.  It’s like a paradigm shift which happens in your life.  So when did you realize that?

AS:  I don’t know.  Honestly I don’t know when he being my grandfather stopped and he becoming my guru emerged.  When I came to Pune I just wanted to see what this yoga was about.  I mean, why there are so many people from all over the world who come to my grandfather to learn…so let me see what this is all about, that’s how I started my learning in yoga.  And he was teaching me asanas, and somehow it just evolved into he teaching me …

PB:  And also, so you’re one of the more younger teachers in the world of yoga, so how do you feel your teaching has evolved from the time your grandfather was teaching, from the time his guru was teaching?  You know because people have also changed, so do you think your style of teaching has evolved with the times or is different from what the style of teaching of older teachers has been.

AS:  Ah…I have not seen the older generation teach..you know..8 years ago I don’t know how it was but I’ve heard stories.  I’ve heard stories of how my grandfather told his guru that he can’t do Hanumanasana.  And his guru: Why?  And my grandfather as a young boy when he told his guru that I cannot do the Hanumanasana because my langot is tight and his guru said just bring the scissors I’ll cut off your langot and you just do the Hanumansana.  It’s about doing the Hanumanasana (both begin to laugh), it’s not about your clothing.  So the gurus of those days I guess were like that (laughs).  So…uh…I have started teaching in this age, so I have seen people, moved around people of this generation so it must have evolved in this style.  But like I told you before, fortunately because I’ve seen them, I’ve seen Guruji, I’m still seeing my uncle and aunt, it is different.  Because being closer to the source…I guess makes a difference.

PB:  And what is a typical day in your life like?  You know, when do you wake up and when do you practice?

AS: (laughs) Now my daughter has started school (laughs some more), so its changed.  So I wake up, make her … pack her off to school and then my practice starts at nine.  Goes on til twelve in the afternoon.  And then I…two three days a week I also practice in the evening from four to six.  Other two days I teach.  My grandfather has said that if you are teaching a one hour class your practice that day has to be of three hours so…(both start laughing)

PB:  I see, I’ll keep that in mind. (laughs).  Your tips for yoga practitioners of the Iyengar tradition in terms of diet, practice and code of conduct.

AS:  Practice would come first.  Diet and code of conduct would follow.  Practice, practice with all your heart, practice with sincerity.  You know, often we cheat ourselves and we don’t know we are cheating ourselves I mean, if the going gets tough we want to go away from that.  We think this is my limit, this is all I can do, that’s how the human mind thinks.  And it’s very difficult to challenge that if you don’t have a good teacher.  I mean, Guruji was there telling me you are escaping, you are being lazy.  At that time I thought I was putting in my best and I thought I couldn’t do anything more than this but then he would say no this is nothing.  So he was there, to you know, push me through that.  And again, its not just about the quantity or the intensity but it’s one part of it.  The point is asanas teach you about your own thinking pattern.  You know, we so often want to escape, you so often want to do so much lesser than what we are truly capable of so fortunately if you have a good teacher who can identify the weakness in you and push you along then it’s good.  Otherwise you have to be really observant and critical of yourself, to see what you are doing.  And once your practice goes up like that, your diet will change on its own because you will realize that if you had a late lunch it’s not working well.  If you’ve had a heavy lunch it’s not working well.  If you’ve had spicy food it’s not working well.  So that will change on its own.

AS:  Ah..I’m a born vegetarian so I don’t know the other side of it.  But what I have seen my grandfather tell people is that you practice and you…

PB:  Yeah I read about that in ‘Light on Yoga’ also…And code of conduct?  I know it’s a very vast thing but as a practitioner is there anything you’d like to say?

AS: (laughs) The wanna be yoga teachers of the Iyengar style have to realize that a lot more has to be put in before you can become a teacher. (laughs)

AS:  because it’s very … I don’t know whether the demand is so much…of late so many people have developed this interest to become a teacher.  I don’t know whether it is because of the popularity, because of the media, because of the demand, whatever it is, but we shouldn’t compromise on the quality…so we shouldn’t hurry up to become teachers.  My uncle often tells in class that you do all your schooling, you go for your graduation, you go for your post graduation, you do another degree and then you teach kindergarten.  So you know you cannot learn for three years and then teach a one year old in yoga.  So you have to have your own abhyasa before you are ready to teach, before you are truly ready to teach…

PB:  OK, alright.  So that’s pretty much all the questions I have.  Thank you so much. 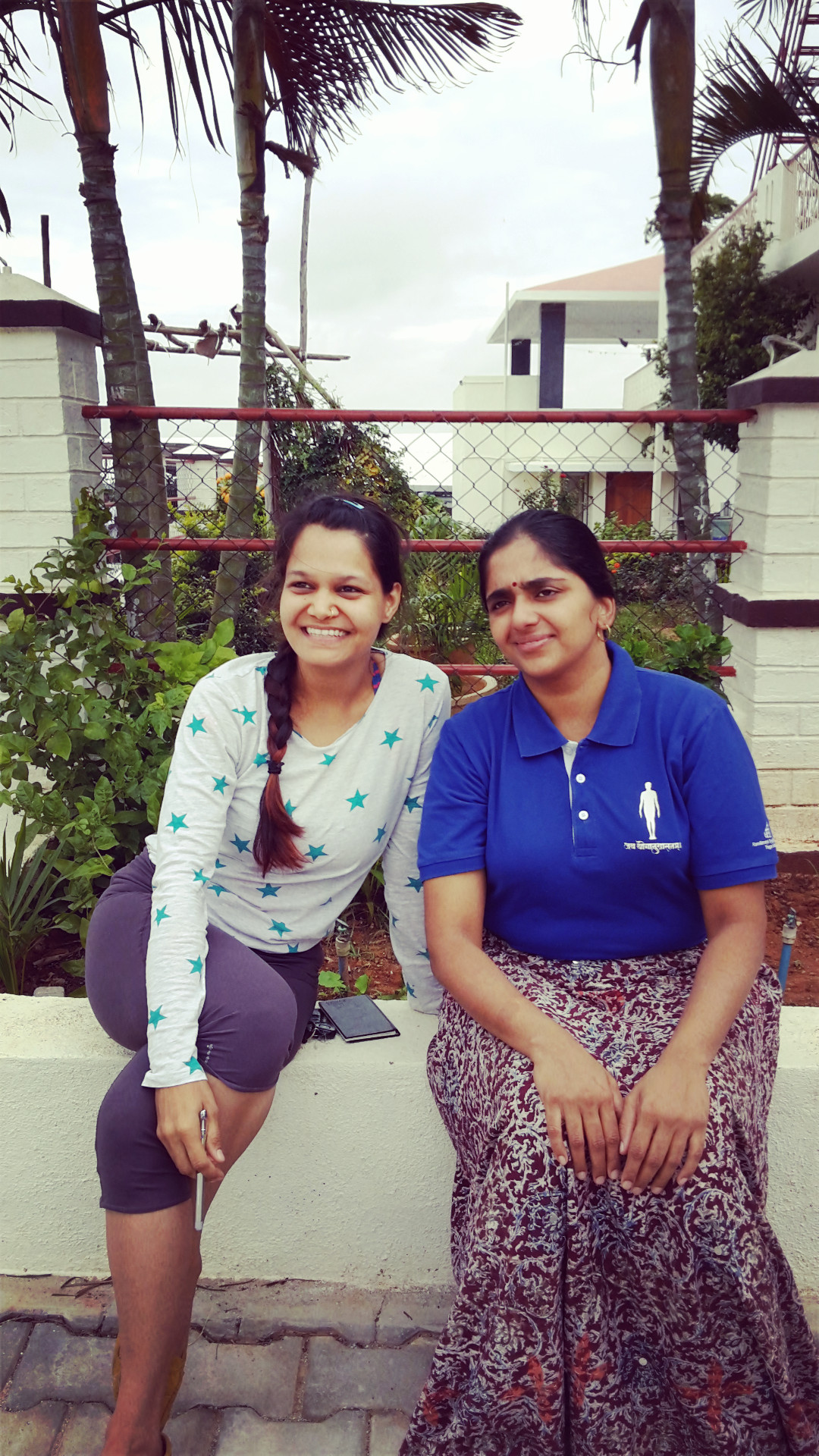 And here’s a link where you can listen to the interview: