A Day in Varanasi – The Ghats & Death

Boats anchored at Assi Ghat. We were there on the day of Chhath Puja, and all the ghats were festive.

“Oh Agastya, One should not be amazed at the notion that this Ganges is really Power, for is she not the Supreme Shakti or the Eternal Shiva, taken the form of water?”

The Ghats of Varanasi are legendary.  Originally all the ghats were clay, but today many of them have been rebuilt with concrete steps.  The ghats here that infuse the city with a certain air of romance.  Walking along any of the ghats (which remain largely unchanged for the last 3000 years), it’s possible to imagine the wooden ferries transporting goods from other kingdoms to Kashi.  Yogis, brahmins, travellers, kings, servants, artists, philosophers…all came to Varanasi on these ferries.  And like visitors today, they were also on a quest… 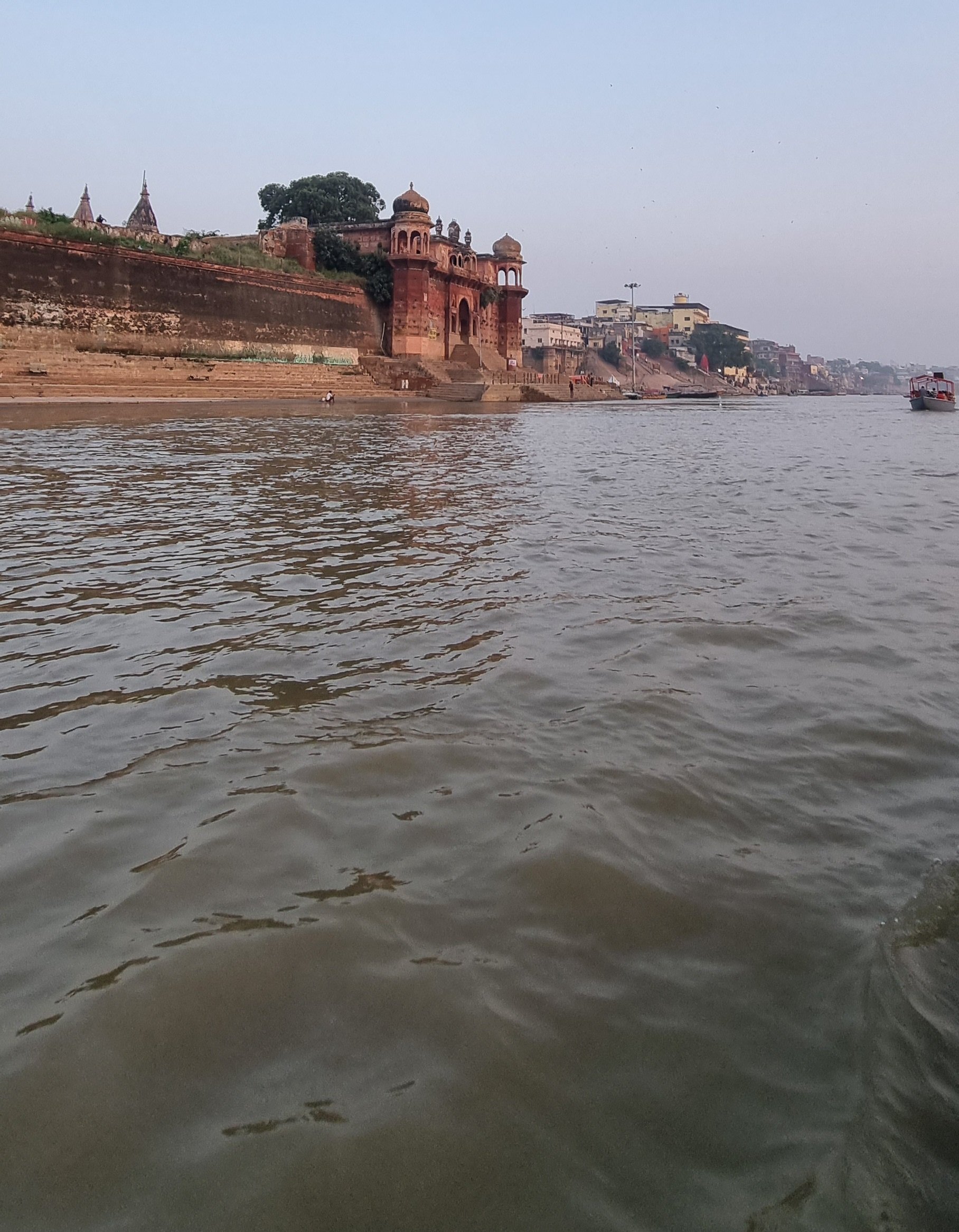 And the most poignant quest for a living being is a peaceful death.  Drifting along the Ganges, the bustling life at Assi ghat contrasts strikingly with the burning pyres at Manikarnika Ghat.  There is a saying that goes ‘Kashyam maranam muktih‘ which means ‘Death in Kashi is Liberation’.  It is believed that if you die here, you’re sure to attain moksha.  According to legend, this is because Yama has no power in Kashi, and it’s Shiva that presides over your death.  So this city finds itself the receptacle of the old and the sick. 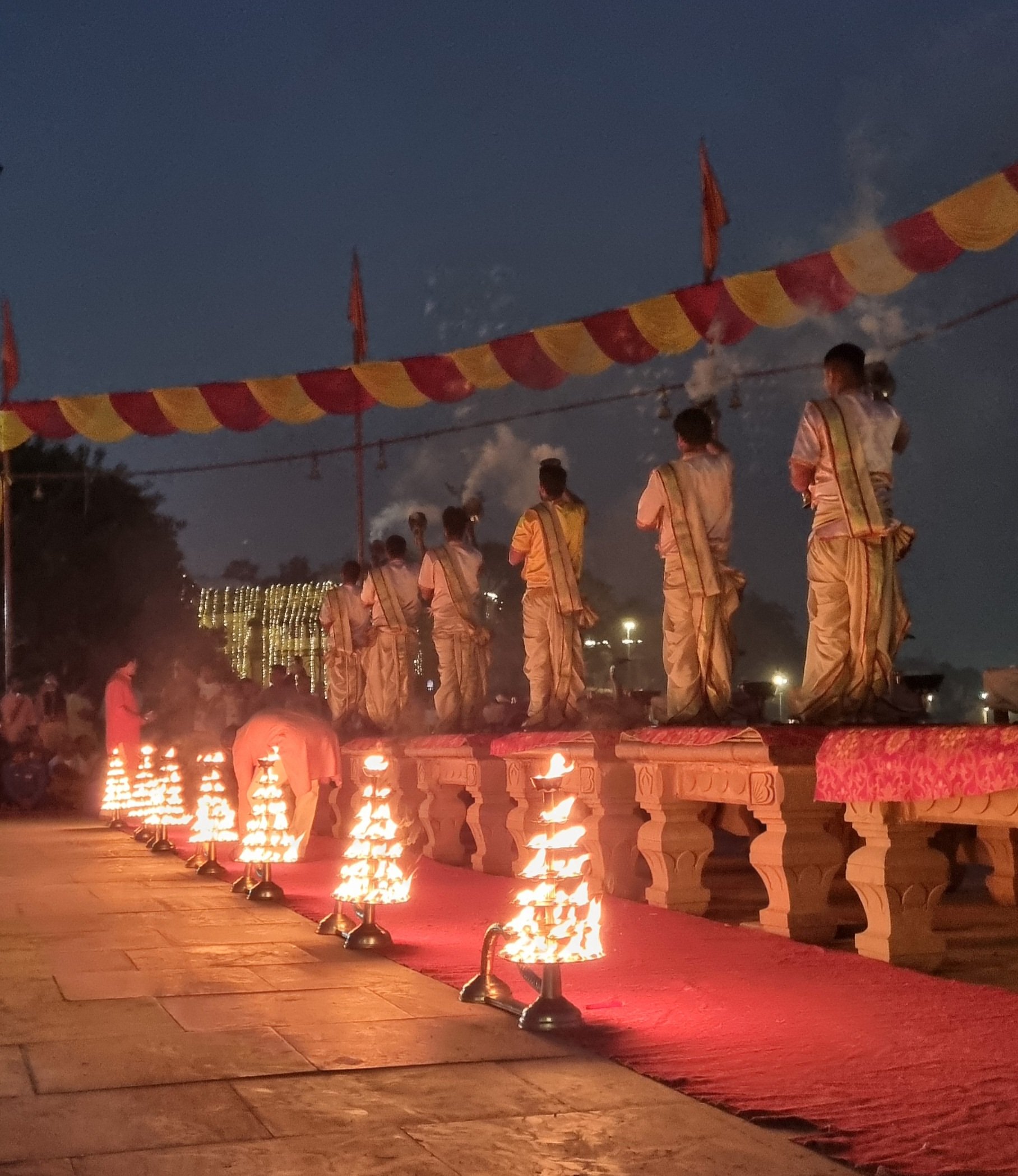 The Ganga aarti, a part of the Subah-e-Banaras program at Assi Ghat.

A boat ride on the Ganges is a mandatory part of any itinerary.  Watch my video about Varanasi (including boat rides) here.  Our boatman led us to the Hanuman Ghat, from where we were to board our boat.  It’s unclear why or how this ghat gets its name.  A large number of South Indians inhabit this ghat today, including Mr. K. Venkat Raman.  The next ghat is the Chausathi Yogini Ghat – which was our first destination for the day. 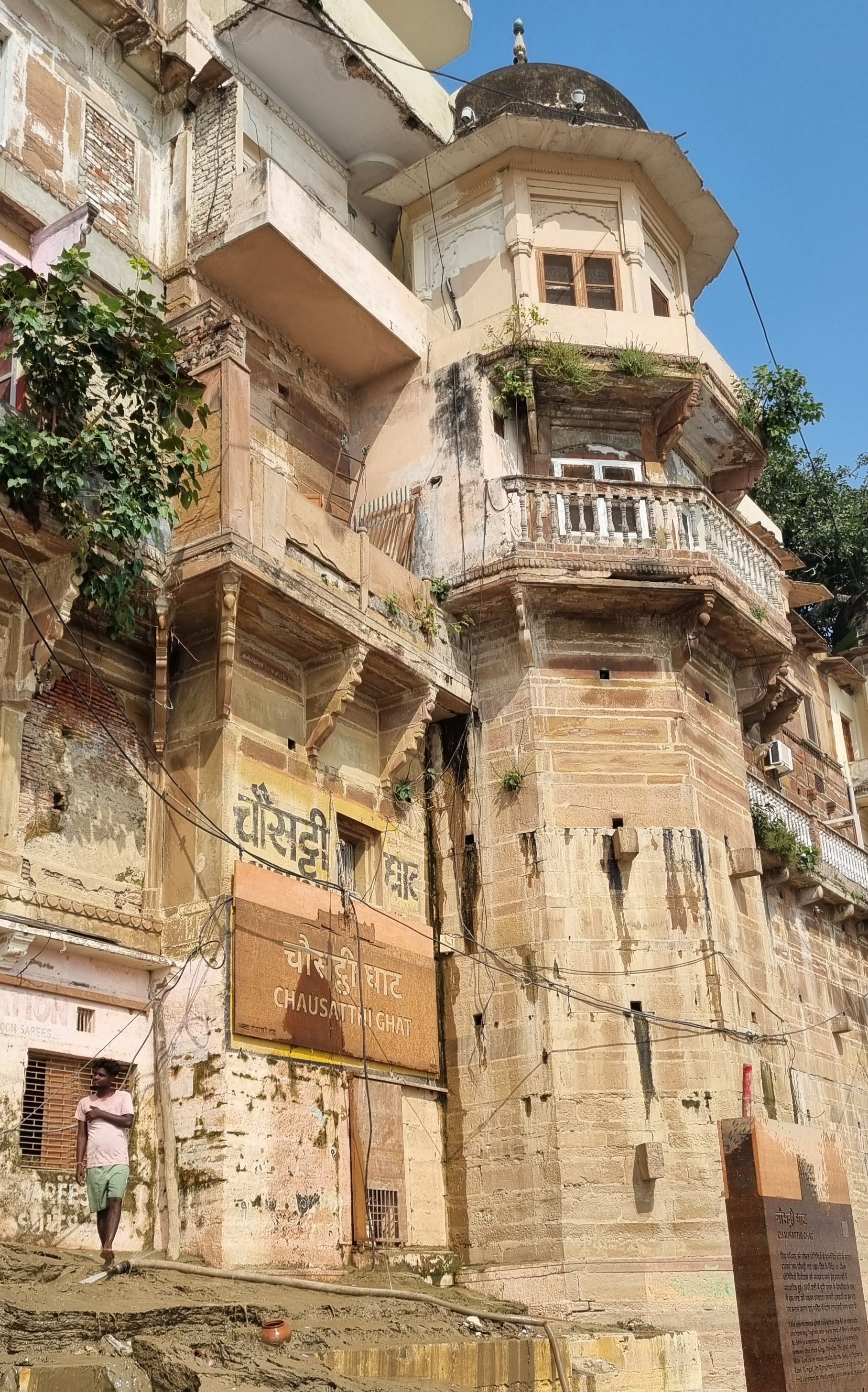 The Chausathi Ghat – You can still see the domes of the old building and a new board in English is placed right under the old one written in Hindi and painted on the wall of the buildling.

It is said that once upon a time Holi used to be celebrated on this Ghat in honour of the 64 yoginis.  Legend goes that when Shiva wanted to come back to Kashi, he sent many emissaries to King Divodasa.  Amongst these were the 64 yoginis… 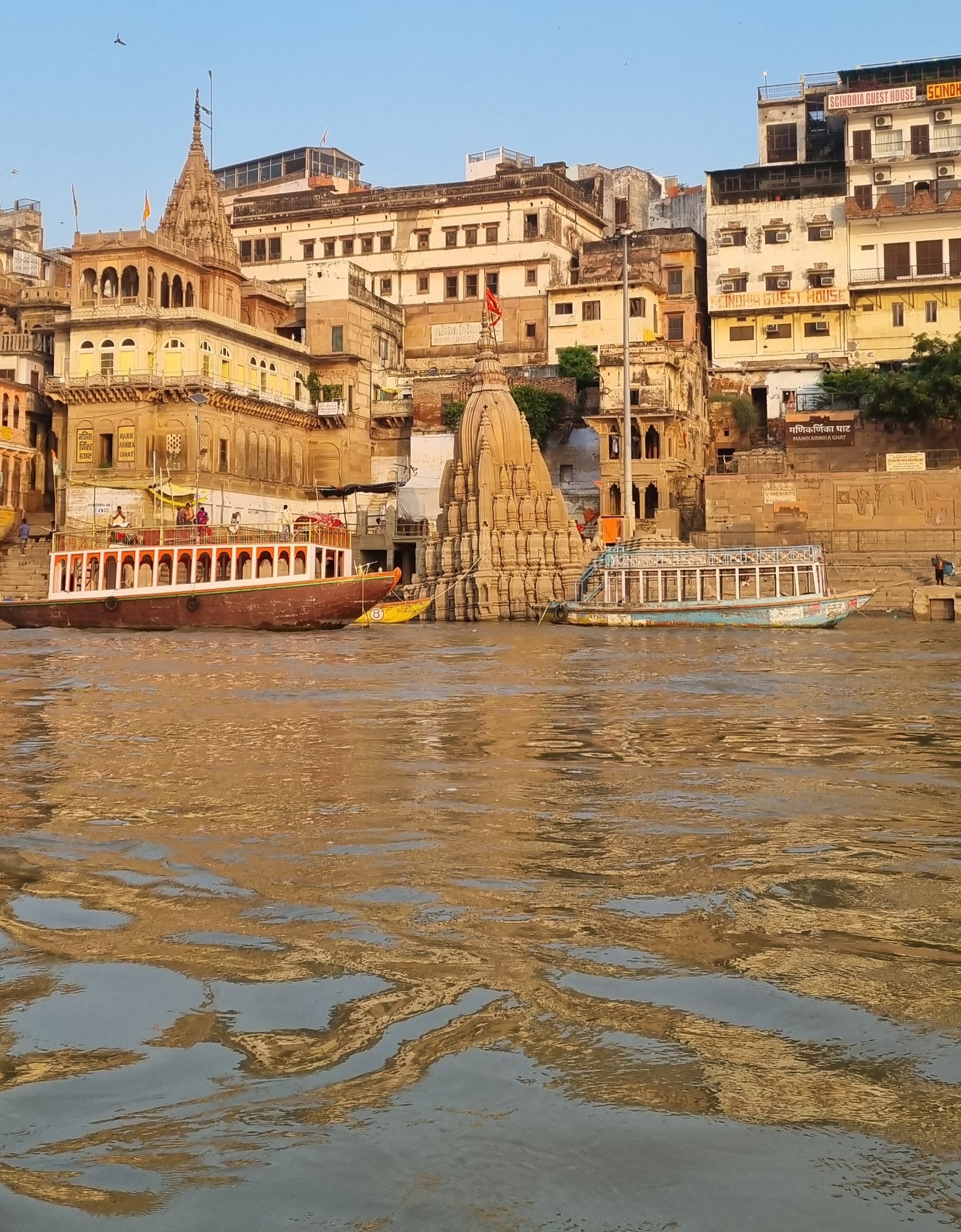 The Leaning Temple of Varanasi. It tilts at an angle of 9 degrees! 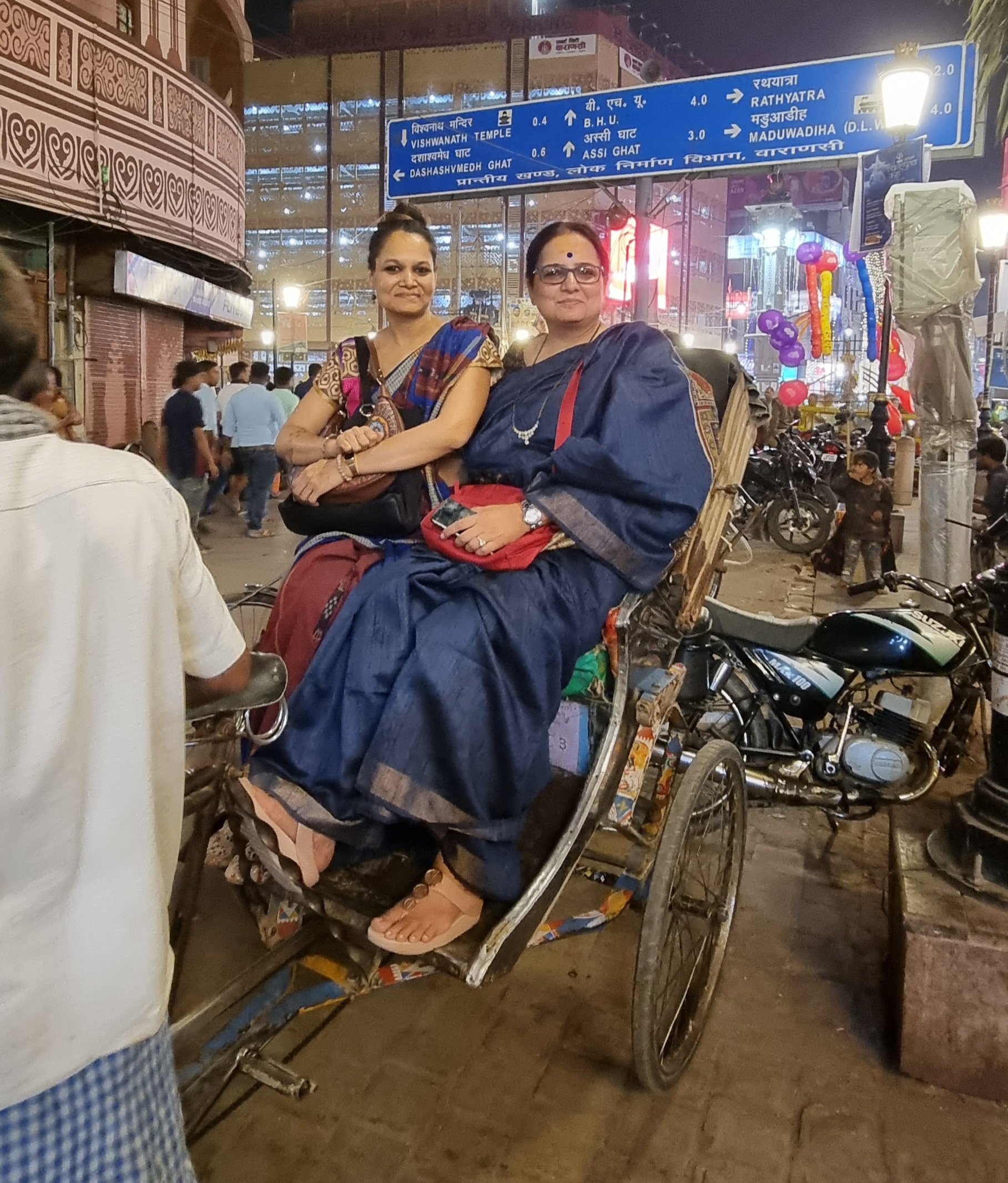 On a rickshaw after ages! Near the Kashi Vishwanath Temple.