The Industrialization of Vadapav

My tryst with vadapav began late in life.  A couple of years ago I was in Pune and in between classes at RIMYI.  There are small snacks kiosks not too far from the institute.  Many students hang around them with some tea as we wait for classes to start again.  One fateful day I decided to try vadapav…and wasn’t too impressed.  After all, it’s just a deep friend potato patty in a bun.  A little chilly powder and a whole chilly, by way of garnishing.  I’ve had this snack between classes, and on breaks on the Mumbai-Pune highway.

Not much of a foodie, I’ve rarely ventured out for vadapav in Bangalore.  But one day I spotted a ‘Goli Vadapav’ kiosk on Indiranagar Double Road, and over the weekend, on MG Road!  Imagine my surprise when I came across ‘My Journey with Vadapav’ in a nondescript book sale in the by-lanes of Malleshwaram!  I had to pick it up.  I was also kicked that this book fit the first prompt of my #readingwithmuffy challenge (saved by the little dog on the cover!)

However, it turns out that there is more ‘dog’ in this book, than just the one on the cover…

‘My Journey with Vadapav’ chronicles the inception and growth of the ‘Goli Vadapav’ brand.  It’s written by Vekatesh Iyer, Founder and CEO of Goli Vadapav.

A couple of years ago I worked for a startup and I was curious to read an intimate account of the decidedly harrowing world of turning your passion into a business .  Since this book was written by the man who had the eureka moment for the product, I was looking for insight into the mind of a man on a mission.  What I got was an analysis of the growth of the business from inception to now.  Many numbers and numerous strategies.  As such, I think this book would be of interest only to those looking to study Goli Vadapav as a business, not someone who is looking to get inspired by a triumph-against-all-odds story.

The book is peppered with references to Bollywood, Hindu mythology and sports.  Instead of being seamlessly incorporated into the narrative, these examples only distracted me.  However hard he tried, the examples didn’t clarify any of his ideas.  Straightforward explanations would’ve worked better, and kept readers more focused on the story. 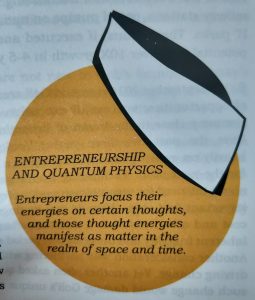 Random analogies like this one are interspersed throughout the book. While they may make sense to some, they also come across as preachy. 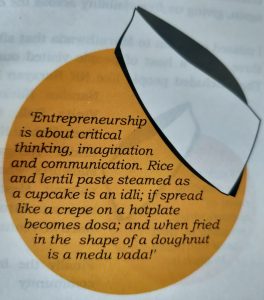 I could’ve done with lesser examples. I would’ve much rather read an account with more show than tell.

I also found it disappointing that somewhere along the way these people (who initially wanted to bring real vadapav to the masses) sold out to corporatization and industrialization, and that too unapologetically. Such as when metal detectors to scan frozen vadas came into the picture.  The story goes that a customer once discovered a nail in his vadapav.  This lead to the team brainstorming ideas for how to make this an automated process, and thereby eliminate any such issues in the future.  They came up with the distinctly unappetizing solution to freeze the vada patties and run them through a metal detector, so that human intervention is eliminated.

When I read this I also realized that this would mean more preservatives, sodium, trans-fat, sugar etc in the product.  Now these patties are prepared, frozen (spices and all), and reach you after many food miles. They are then thawed, deep-fried, and handed over to you.

Takeaways (no, not the Vadapav)

I’ve never professed a love for road-side food.  It’s oily, un-hygienic, unappetizing and just not my thing.  I want to kick my shoes off, wash my hands, cross my legs and then enjoy my food.  But between the just-fried vadapav on the streets of Pune, and the sterilized vadas from Goli Vadapav, I would prefer the former.  Give me a freshly fried vada over a preservative-laden frozen one any day.  Give me the personal touch of the thele-wala, whose reputation lies in every single one of his vadapavs…

But perhaps, a business is only a business, and the passion is only to see your ‘bright’ idea in the headlines, and of course validation by the balance sheets.

The other day I actually decided to have a go at the Goli Vadapav myself.  I arrived at the kiosk on MG Road armed with my book.  I told myself to be open; to not judge the vadapav by the book.

The lone girl behind me in the picture waited for 15 minutes to get her vadapav.  I asked the vadapav wallah how long it would take to get one.  He muttered something unintelligible and continued to work slowly and silently in the depths of the kiosk. It was now 20 minutes and no vadapav was in sight.  I sighed and left.

At this rate any thele-wallah would be out of business. 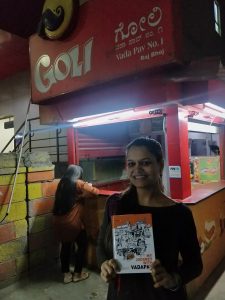 I’ve never seen a crowd around these kiosks, and the thele wallahs in Pune are always swarming with a crowd. Maybe it’s not possible to industrialize the humble vadapav after all.