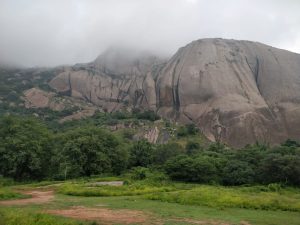 The summit covered by clouds at the beginning of the trek.

Last Sunday a bunch of us decided to trek up the Savandurga hill.  My friends reached my house at 4 am.  We were to reach the base camp by 6 am and start climbing.  Later than this and it would get too hot.  We had registered for the trek on https://myecotrip.com/.  This is an initiative to encourage eco-sensitive tourism by the government of Karnataka.  They offer eco-friendly tour packages that showcase the natural beauty of Karnataka.  These include day-long treks, visits to bird sanctuaries and wildlife safaris.  Navigating through their website is easy and they are quick to respond to queries on telephone.

Savandurga is a hill 60 km from Bangalore, and is considered to be one of the largest monoliths in Asia.  There are two famous temples at the foothills which many pilgrims revere and visit year round, the Savandi Veerabhadreshwara Swamy and Narasimha Swamy temple.  The hills are centuries old.  It is believed that these hills served as the capital for Magadi rulers such as Kempegowda.  It was later taken over by those in power in Mysore.  In 1791, during the Third Anglo-Mysore War, Lord Corwallis captured it from Tipu Sultan.  At one point in time it was also known as Savinadurga or the fort of death! 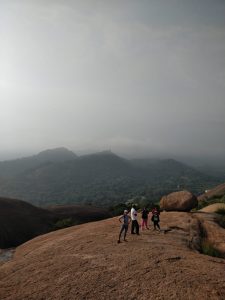 It is a difficult trek – mostly uphill and on rocks.  When the rocks are wet they are super-slippery. 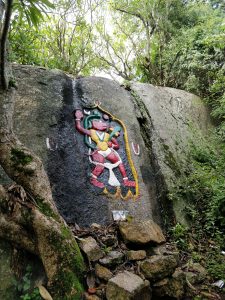 Our guide showed us an ancient Hanuman temple a little away from the trail. Hanuman faces left, which is unusual. 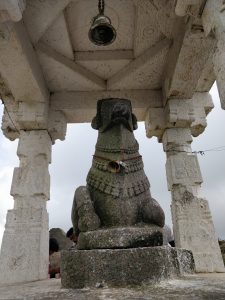 The ancient Nandi at the summit.

For the most part the trek was great.  I would wish that there was less litter and plastic strewn around, but I think the monkeys may be responsible for that.  On the whole I saw that the trekkers were responsible, helpful and considerate towards others on the trail.   But I must mention the exception.

A couple planted themselves right in front of the bull, with no regard for the multitudes of others who had huffed and puffed their way up to the top to get a glimpse of the ancient Nandi.  This is disrespectful on so many levels.  Not only is this a place of tourist interest, but also a place of worship.  All the visitors waited patiently for their turn to whisper their wishes in Nandi’s ear (a custom) while this particular couple refused to move an inch.  Finally my friend went up to them and pointedly asked them to move, which they did…for 10 minutes.

When we think about responsible tourism, perhaps we need to think of this aspect as well.  Just because this temple/place of interest isn’t manned by temple/government officials doesn’t give you permission to be rude, insensitive and inconsiderate.  Some of us trekked up for a darshan of the Nandi, some of us to look at an ancient historical monument, either way we deserve to look at it without two inconsiderate lovebirds crowding our frame.