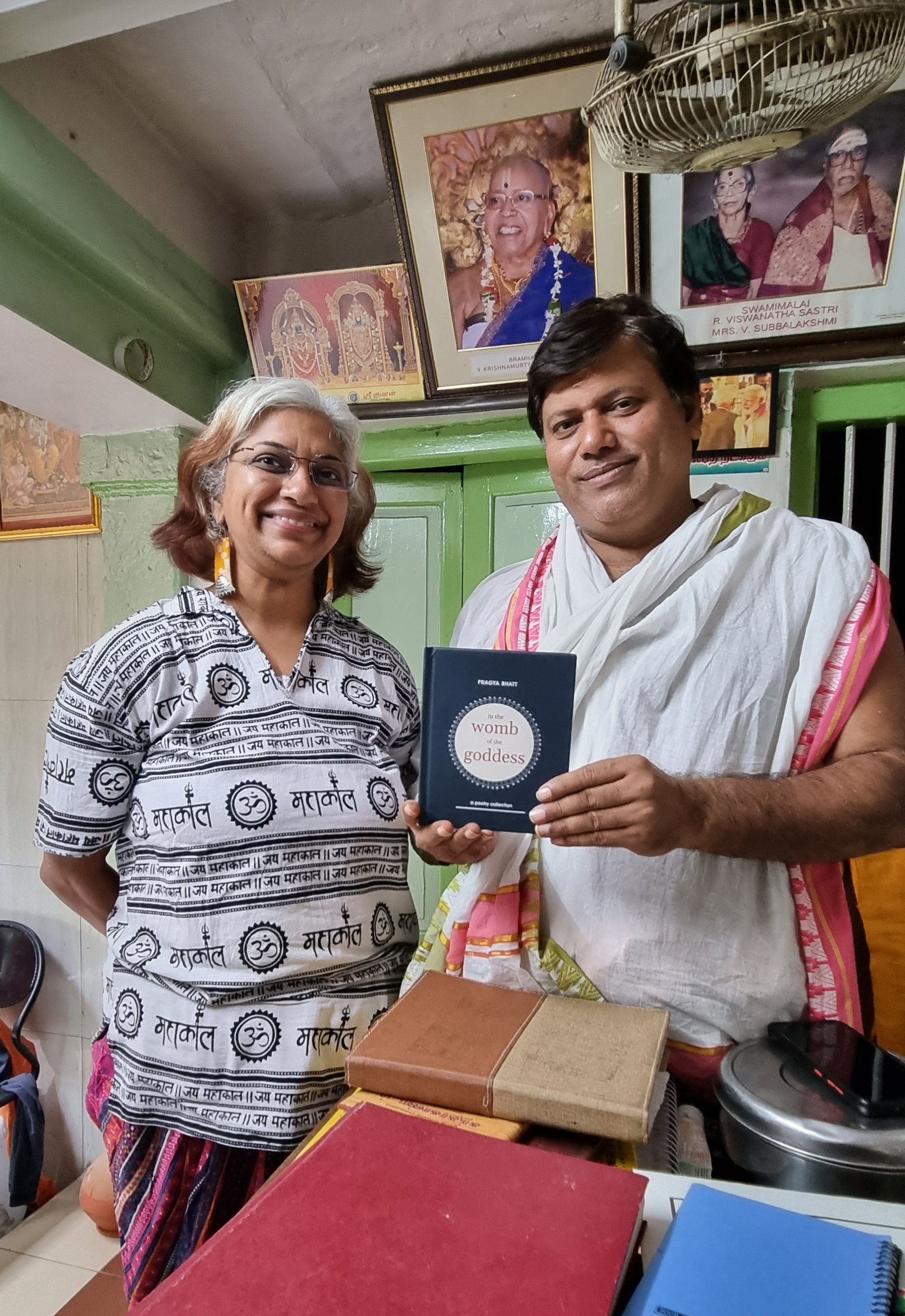 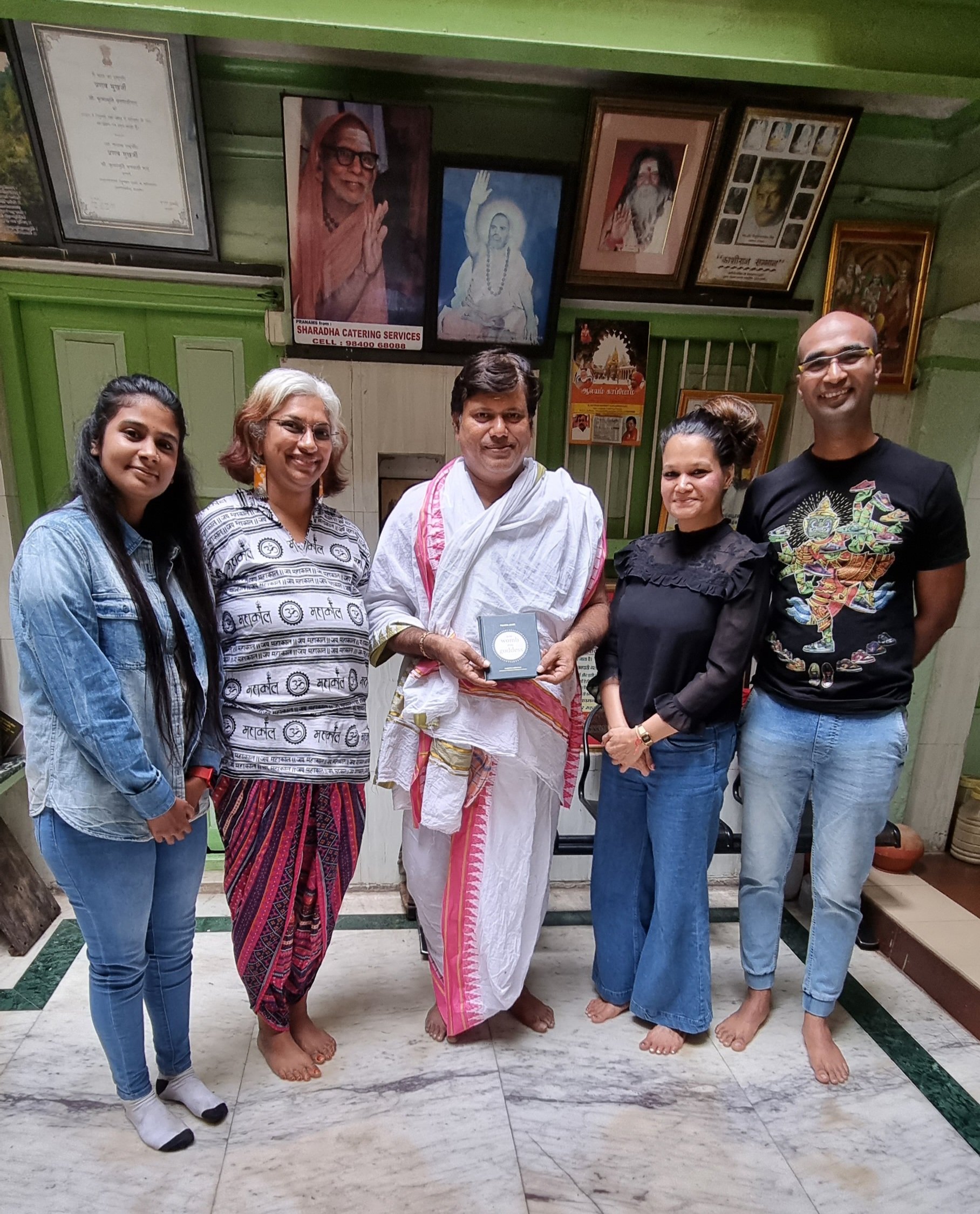 The Yoginis in the Kangra Art Museum

The Kangra Arts Museum has a 360 view of the beautiful Himachali hills.  I’ve done a separate blog about all the fun I had in Dharamshala.

With a trip to study the magnificent Yogini temples in Orissa imminent, I started re-reading Vidya Dehejia’s ‘Yogini Cults and Temples: A Tantric Tradition.”  It’s a wonderful book (one of the best I’ve read on the subject) detailing her extensive research on the topic.  Dehejia starts the book with delving into who the yoginis were and the various definitions about them found in texts, literature and folklore.  As I read through this bit I was reminded of some paintings and artefacts I had seen last year on a visit to the Kangra Art Museum.  I had put these images up as Instagram stories, but I got feedback from many people that they’d like to read a bit more about them.  So below images from my visit, and a little description about each. 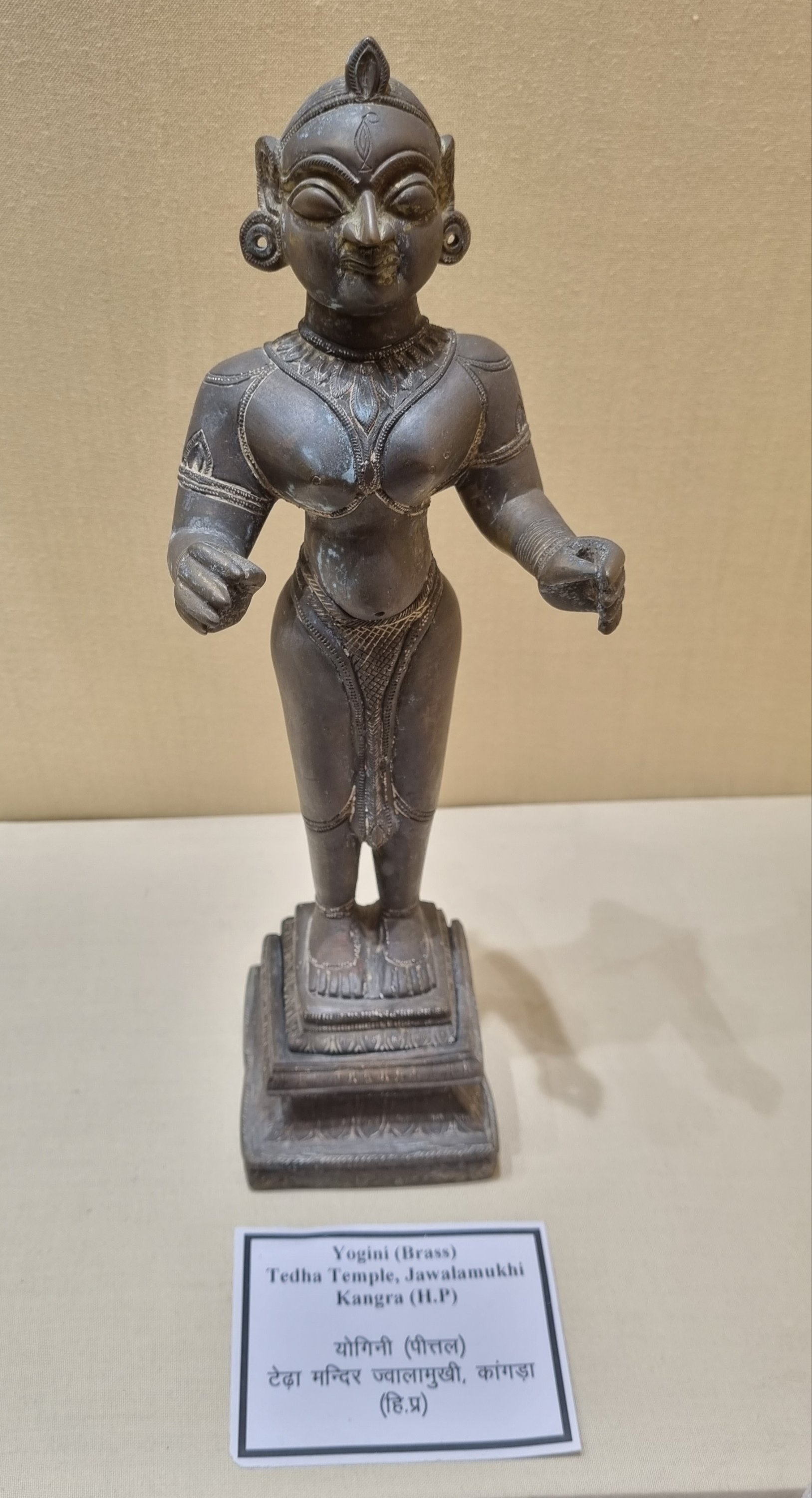 Amongst the numerous brass artefacts was this one marked ‘Yogini’. I’m not sure why it would be labeled such, but perhaps it has to do with the sharp (almost bird-like) facial features? Several of the yogini statues in the 64 Yogini Temples are noted for having animal heads instead of human heads. 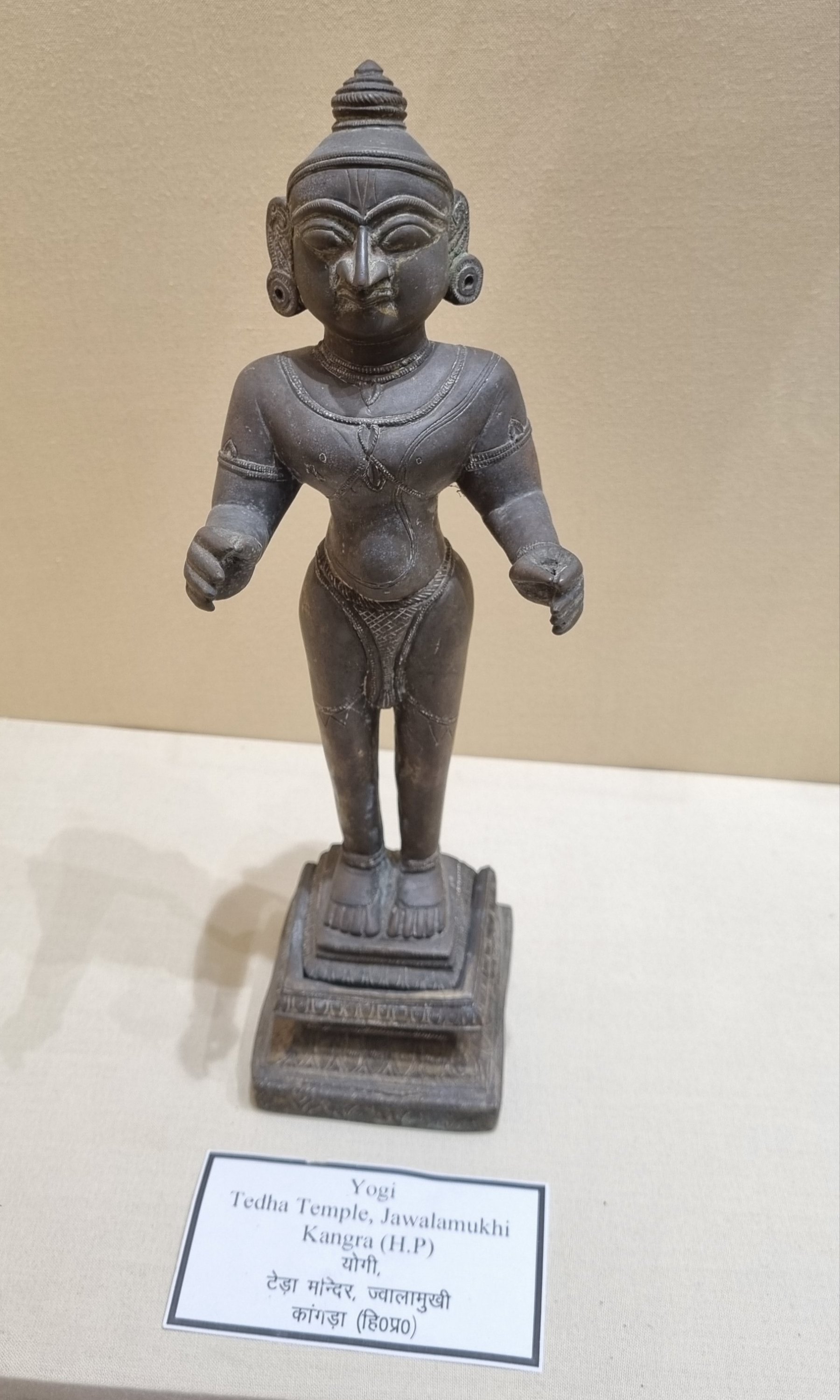 This statue is comparatively less ornately adorned as compared to the yogini. Also, note the mark on the head – which is different from the curvier and loopy mark on the yogini’s head. The headgear also differs between the two. 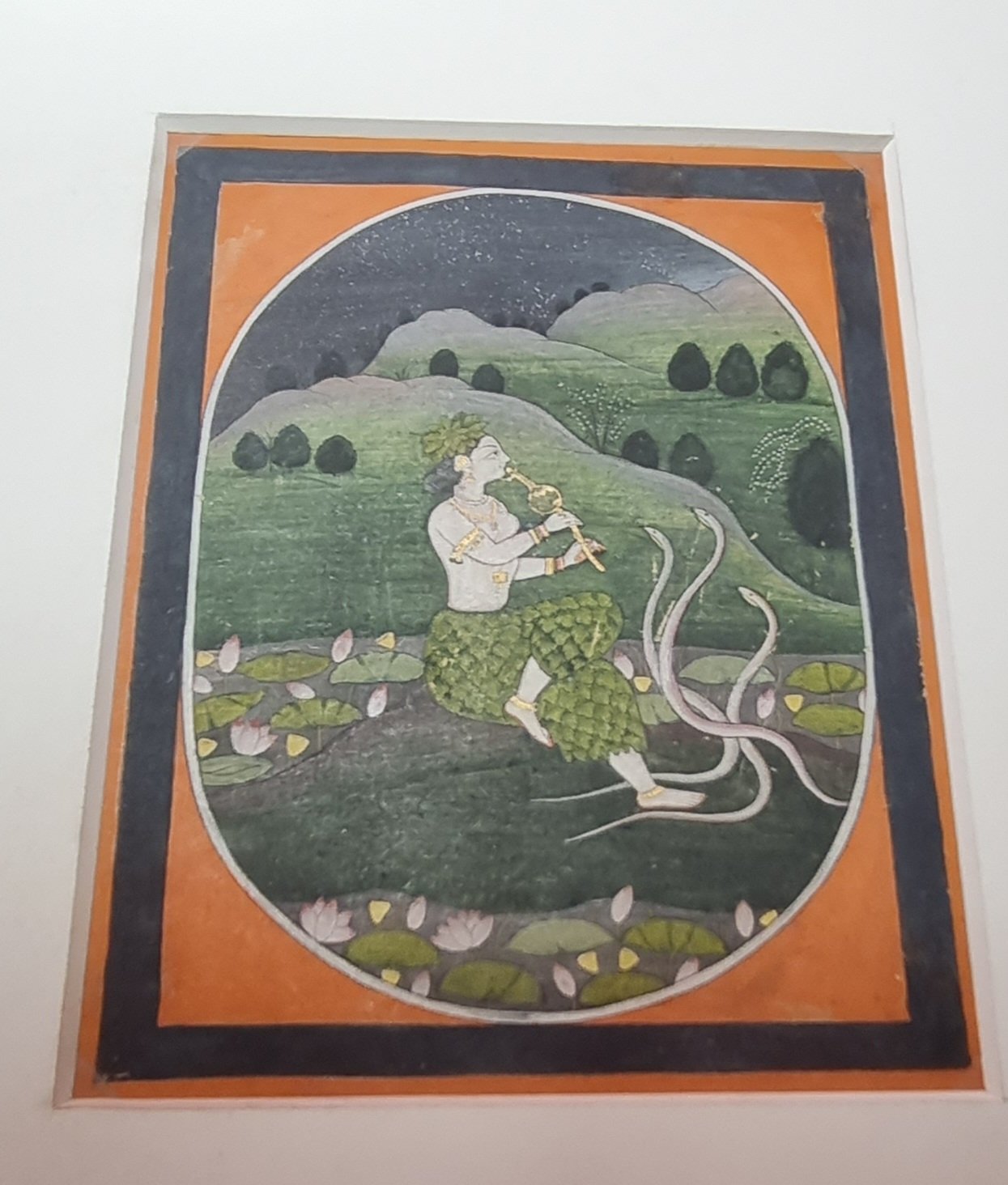 This painting was labelled ‘A Lady charming snakes. 18th century, Guler’. Dehejia mentions in her book that a Yogini is often depicted in a forest, with the ability to control other living creatures. I would say it’s safe to assume that this lady is a yogini. Also, note that her clothes seem to merge with the foliage, and she appears to be wearing nothing but jewellery on her torso. Her seated posture (with legs crossed) is also interesting because generally the female figures are shown with legs bent at the knees and towards one side – whereas here the posture is a bit more masculine. 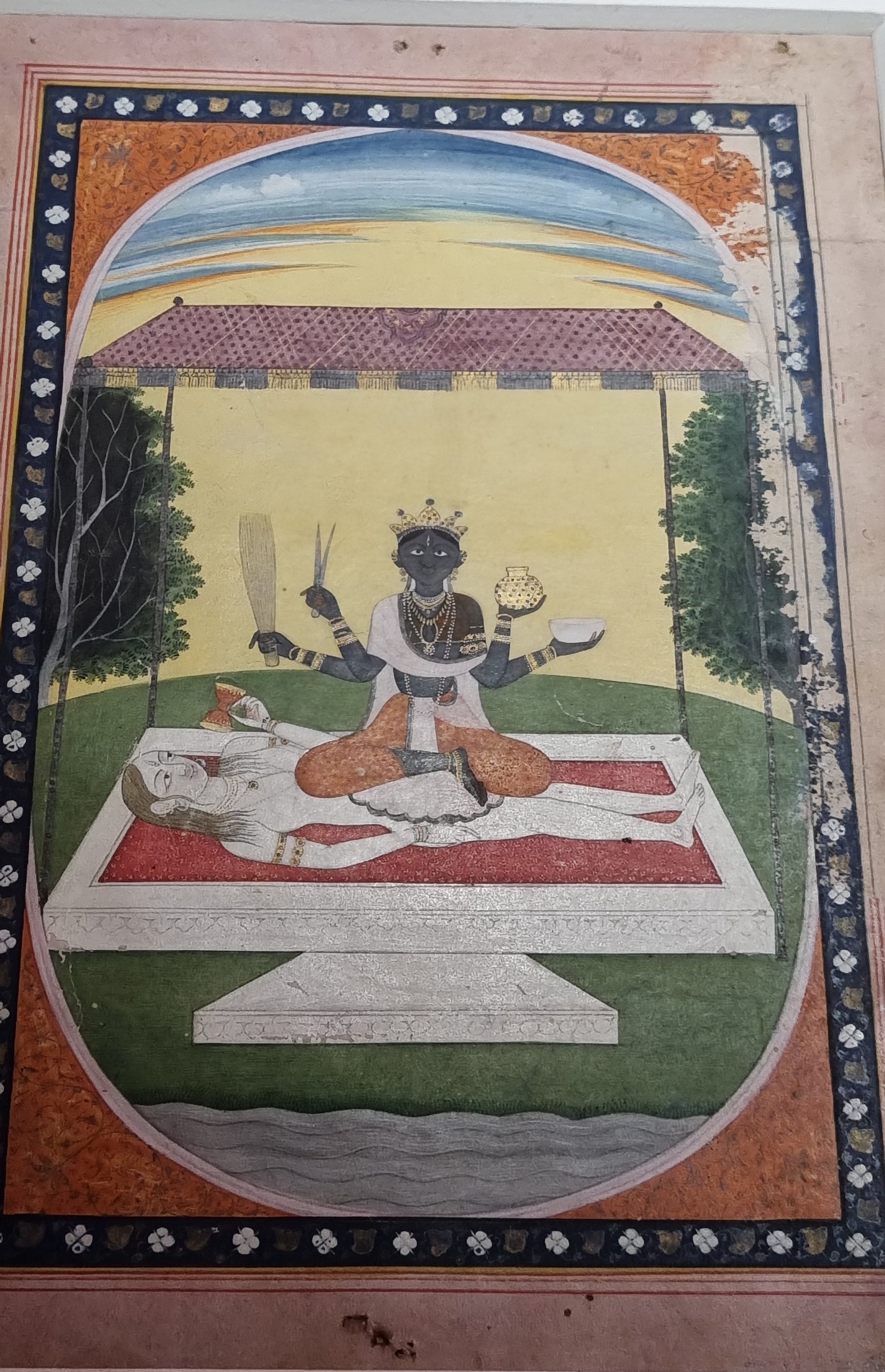 In the Tantric tradition knows as the Kaula marga, the Yogini is the woman who participates with the initiate in the secret practices of the cult, including the rite involving maithuna or copulation. This is an image of Kali sitting on Shiva. We know it’s Shiva because of the damaru in his left hand, but note the lack of Shiva’s copious dreadlocks. Also the items in Kali’s numerous hands – all required for esoteric Tantric rituals. 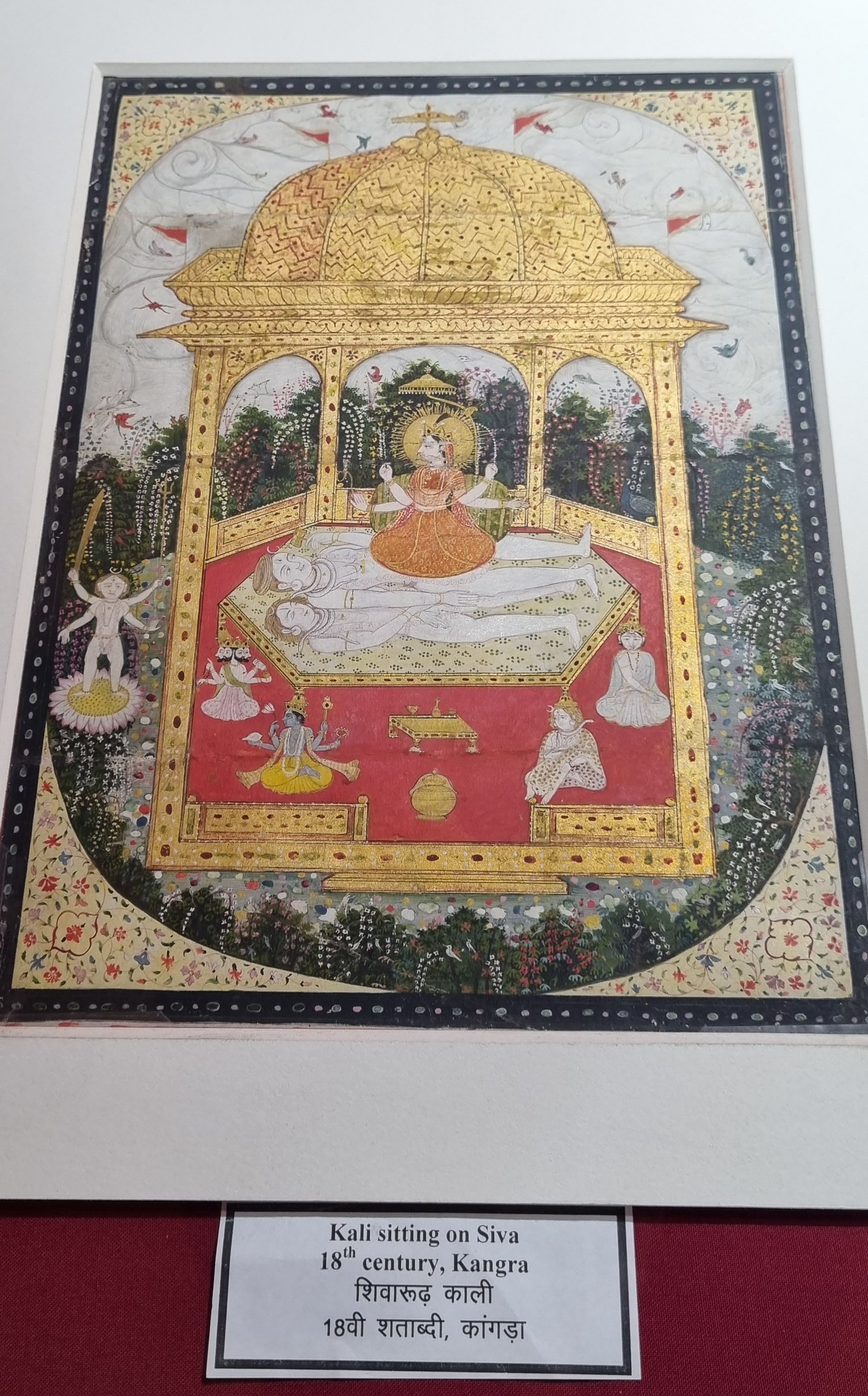 Here Kali is in a different avatar – more decorated, it might be said even more feminine. In this scene the ritual is happening in the presence of other venerated beings. And this aspect of the Yogini is performing a ritual on two male figures – one of which is Shiva. As compared to the Shiva in the previous painting this one has his dreadlocks and Chandra in place. The other figure looks younger, almost a boy. A female figure sitting on two men – one Lord Shiva himself and the other a young boy – risque. 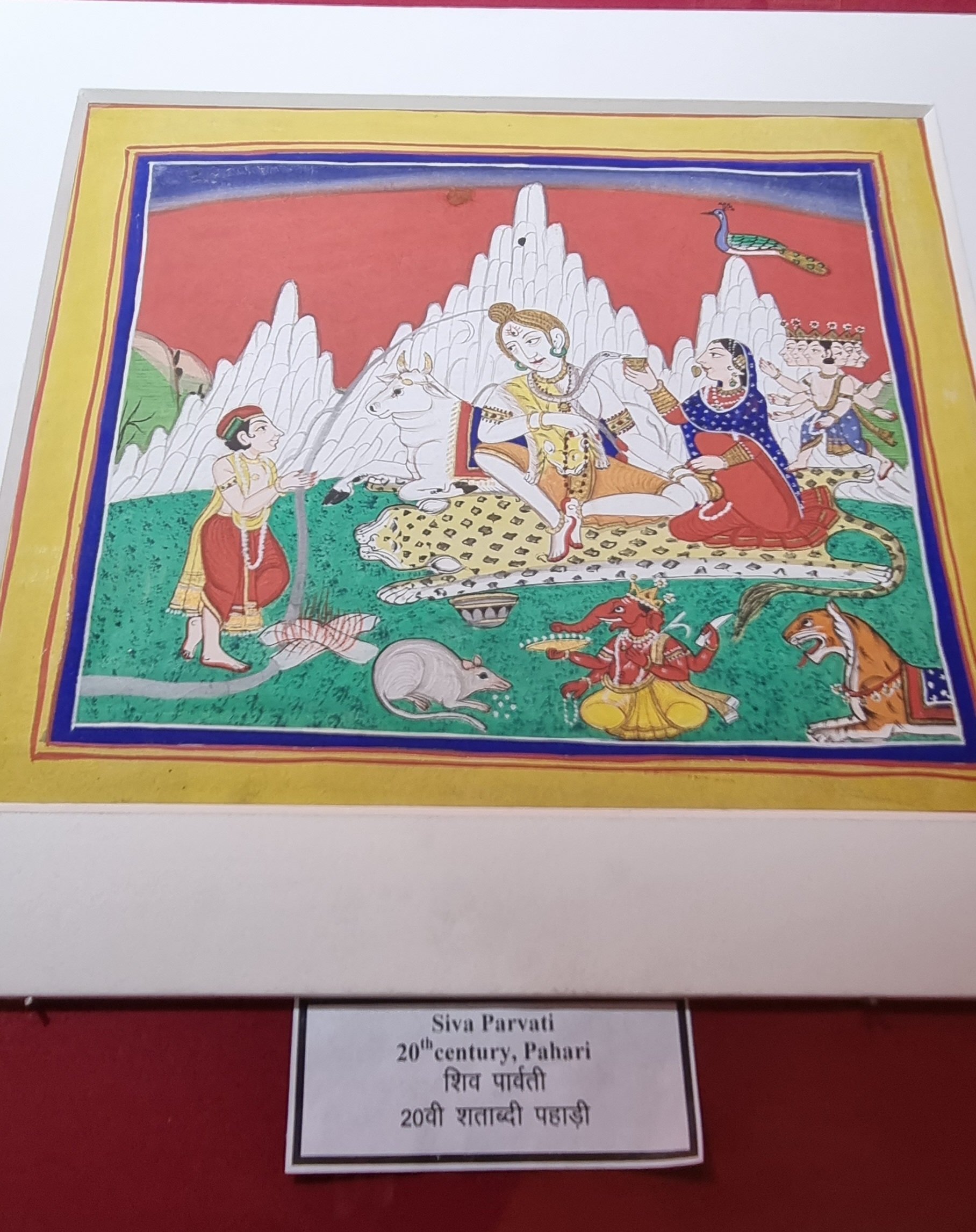 Referring back to Vidya Dehejia’s book – a yogini is often depicted in the forest. Here we see Parvati in her more conventional aspect as Shiva’s consort – however, they are surrounded by animals and she’s calmly giving milk to Shiva’s snake.  Note the color and style of the dupatta – this occurs frequently in a lot of the paintings I saw.  Shiva wears the thick round earrings characteristic of the Nath panth. 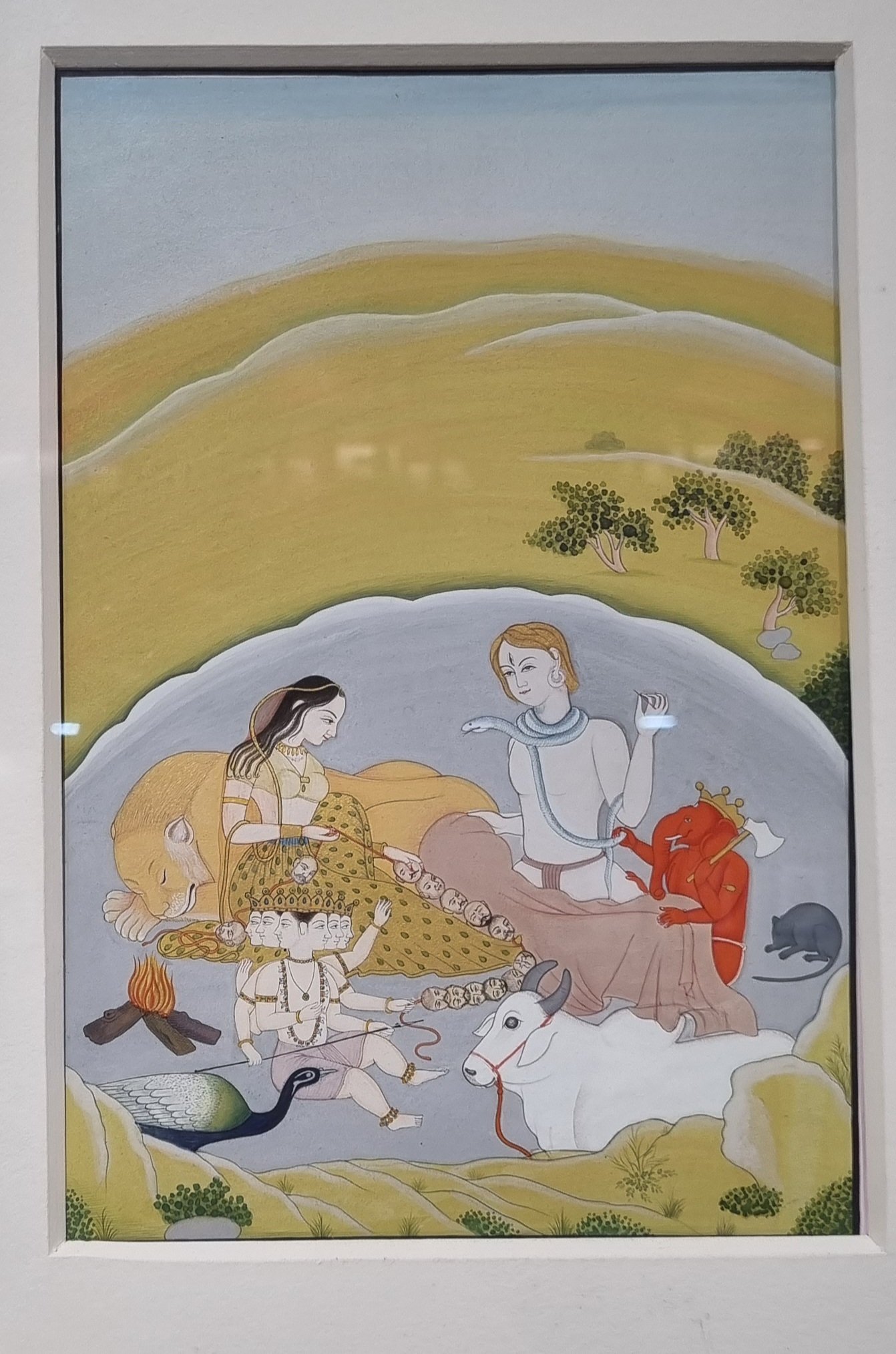 The first thing I noticed about this painting was that Shiva once again appears dreadlock-less, in fact, he’s completely unadorned. It’s one of the most austere depictions of Shiva. And then my attention went to what Parvati was doing! She is stringing together a necklace of human heads, and it appears that Shiva has a needle in his hand to help out. Kali is often depicted as wearing such a necklace around her neck – and that convinces me that this is a painting of a yogini.  By the way, there are 13 heads in the painting – can you spot them all? 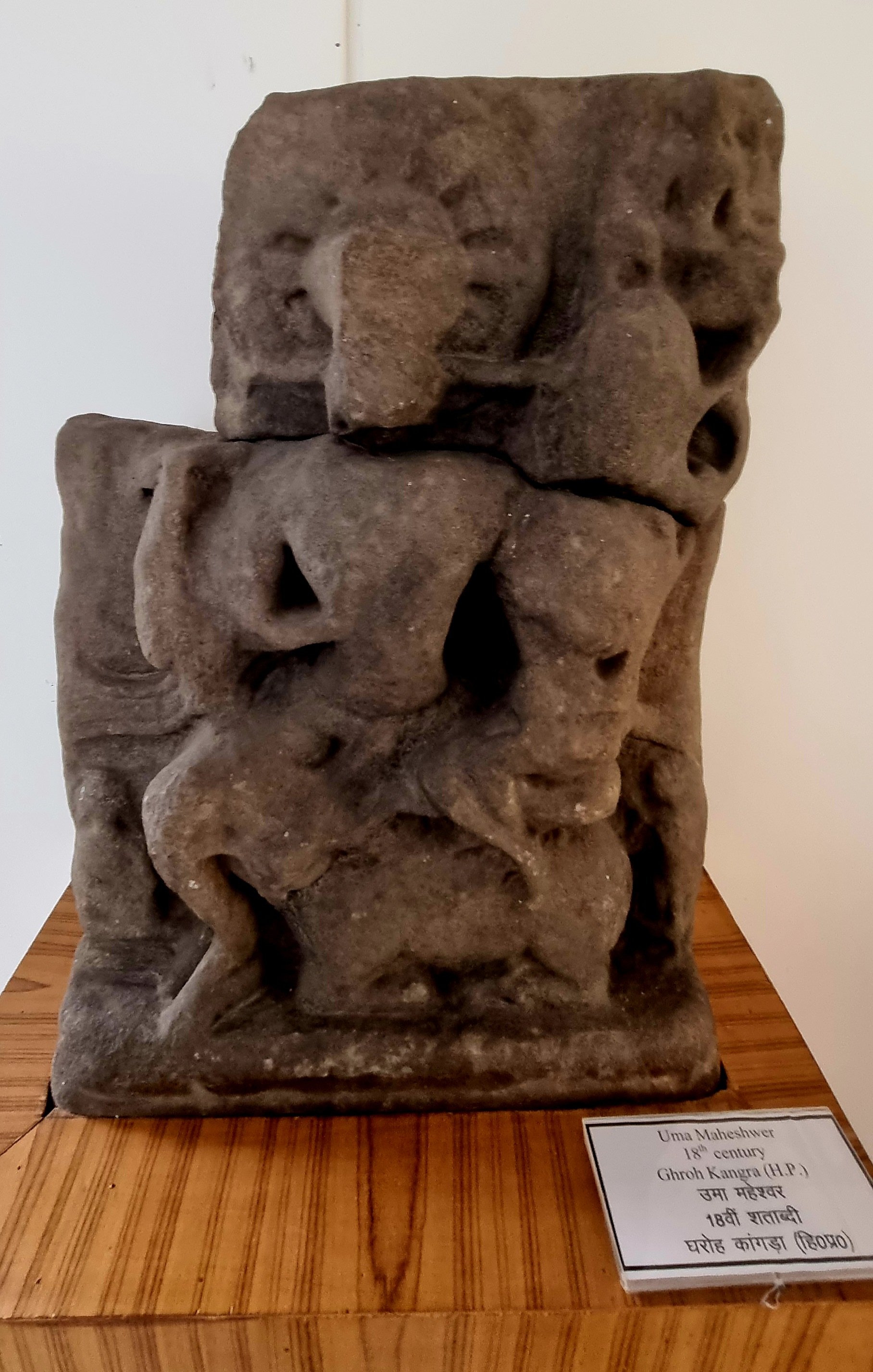 Below are some photos I took at the Kangra Arts Gallery.  If you’re visiting Dharamshala I would highly recommend visiting this place.  It’s right in the center of the main market and you can actually see meet and speak to the artists.  In fact, I got a personal tour where I learned about the themes and techniques of the dying art of Kangra style painting.  It was wonderful to interact with the artists and know about the work that KAPS (Kangra Arts Promotion Society, patronisers of the Kangra Arts Gallery) is doing to educate and spread awareness about Kangra Art.  They also conduct workshops and seminars for those interested in knowing more about the art.

In contrast to the Yogini paintings at the Museum – the paints here depict Bhakti yoga.  Women are beautiful, delicate and finely adorned.  They are depicted as handing out a glass of water, busy with worship or needlework, or playing and instrument.  Note the eyes and faces shyly downcast.  The male figure is conspicuous by its absence.

All these paintings are done with natural dyes.  You can even get a piece commissioned specially for yourself! 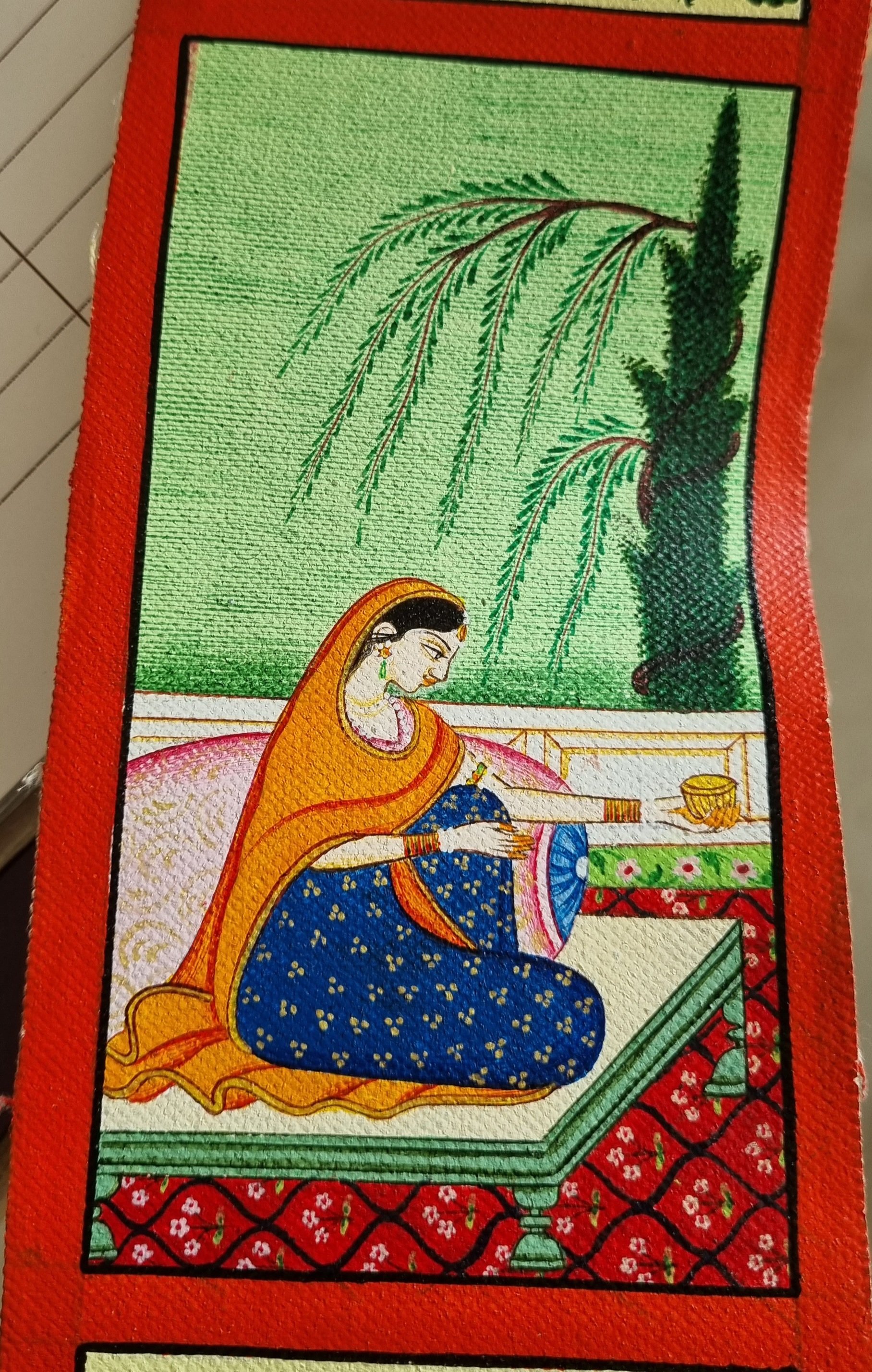 Needlework or composing a song/poetry? 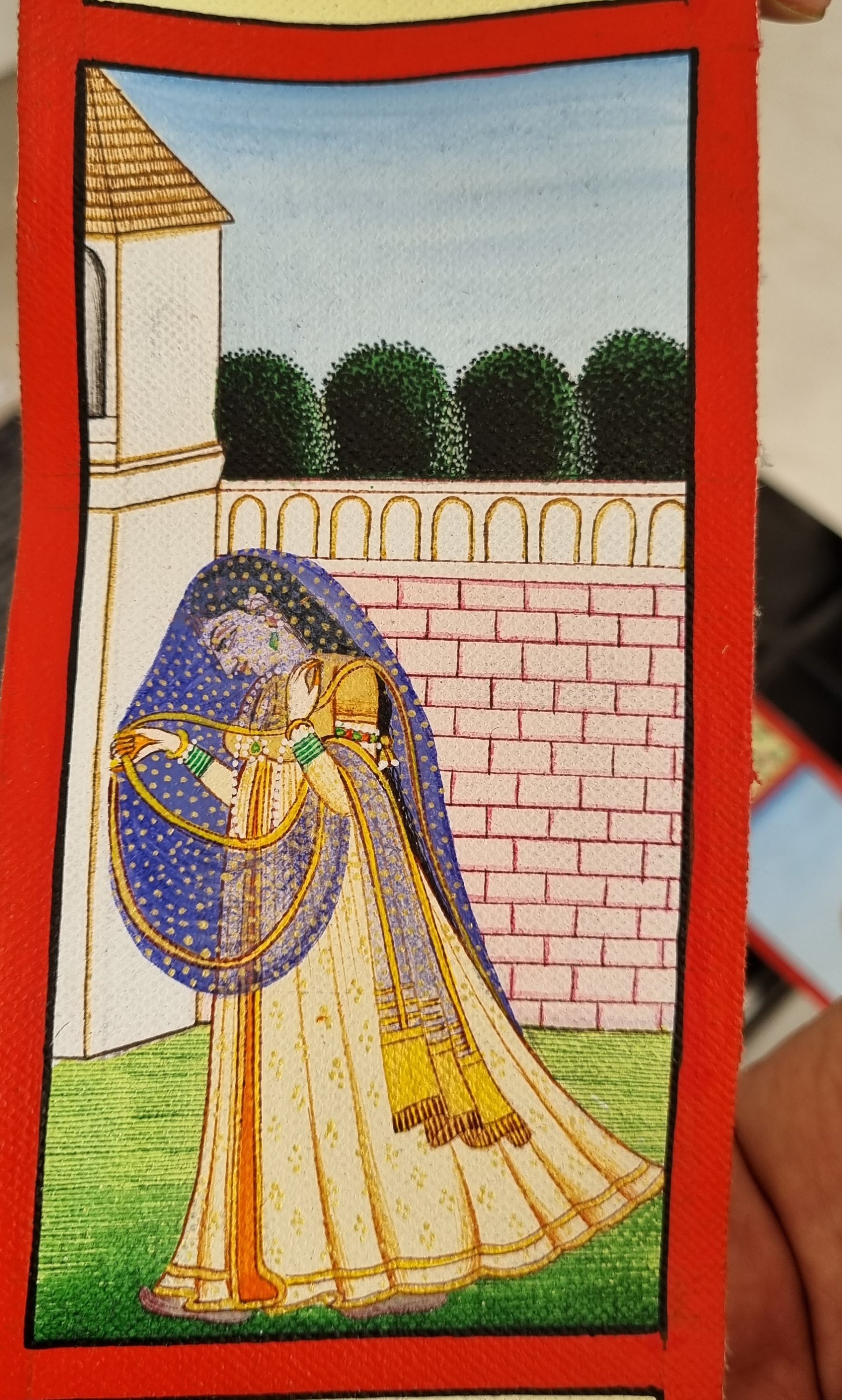 The dupatta here matches the one Parvati was wearing in one of the previous paintings. I guess fashion, like the wheel of life, is also cyclical!

Get something commissioned for yourself!

I expect to see a lot more of such imagery and art in the coming few months, and hope to be able to draw more conclusive parallels between what I see, hear and read.

I’d love to hear your thoughts on this blog, so please leave a comment!