A Dip in Sacred Waters…. 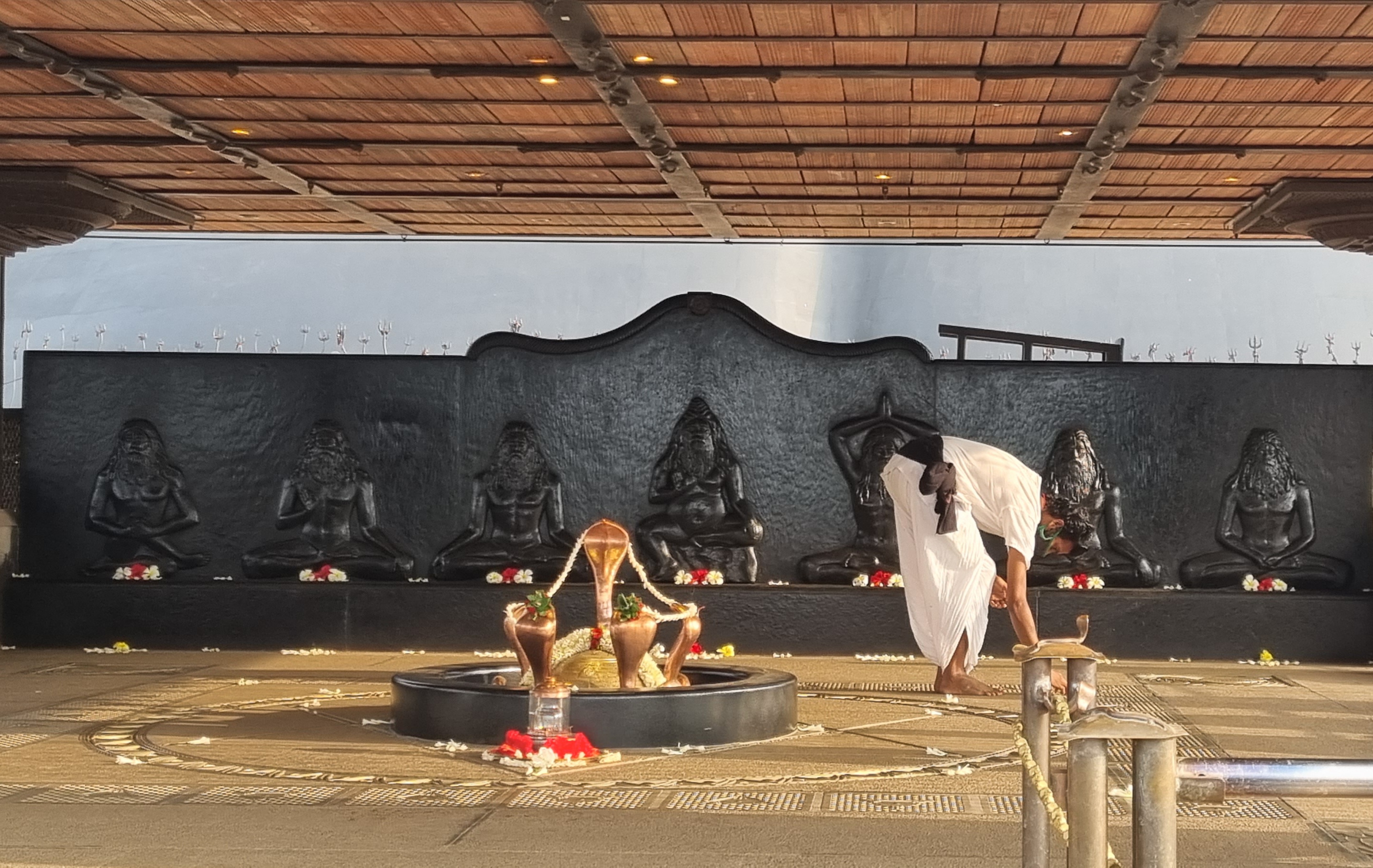 A beautiful mural of 7 siddhas. In the temple in front of the Adi Yogi temple at the Isha Yoga Centre.

A dip in sacred waters is a mainstay of Indian civilisation, and it’s common to see people taking a dip in one of the numerous rivers in the country.  I never thought I’d actually do it myself one day…

Sowmya and I arrived at Isha Yoga centre early one morning, hoping to beat the usual crowds.  But the day we chose was only 4 days ahead of Maha Shivratri and the devout were up and they were about.  Hordes of selfies were being taken in front of the Adi Yogi.  It was only 8 am, but the places was bustling with activity.  A large stage was being constructed and barricades were being erected to keep the imminent crowds in check.  Announcements were blaring from the speakers. 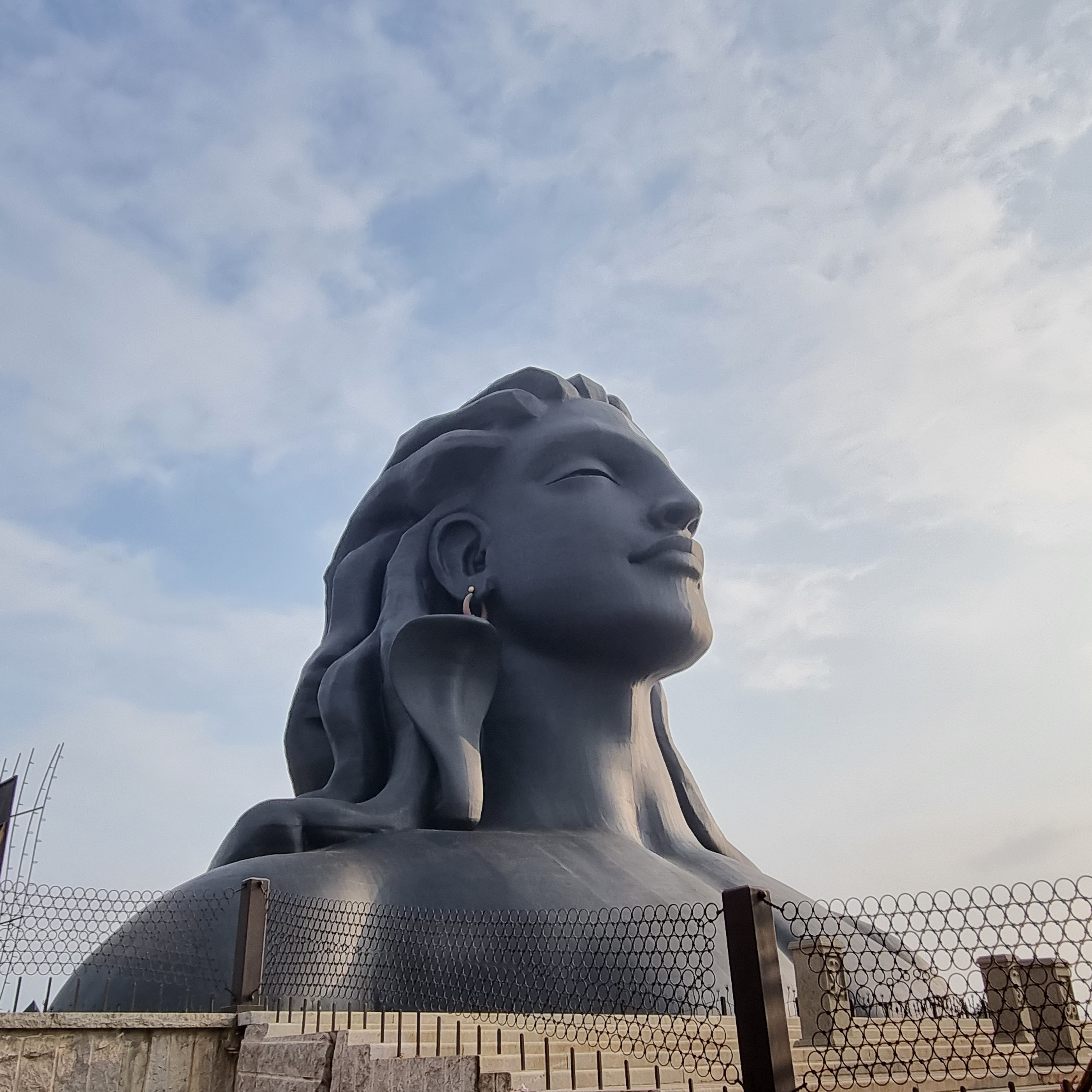 The Adi Yogi statue is built of steel and placed on a raised platform and is visible as you enter the Isha Yoga centre.

In front of the Adi Yogi statue is a temple where daily homas are done.  We reached the temple as special morning prayers on account of Mahashivaratri were were being conducted.  We had a chance to sit around the fire listening to the chanting.  There is a metal lingam in the centre of this temple (several people were doing parikramas around it).  Coiled around the lingam are 5 metal serpents of various heights.  Behind is a beautiful mural of 7 siddhas.  Several people were doing the sashtanga namaskars in front of these statues and the lingam.

After about 10 minutes we got up and decided to walk further into the ashram.  Before entering into the grounds of the main ashram, we were asked to deposit our phones and other valuables (except our wallets) at the security.  We were also allowed to take our towels into the ashram, for which we were given a bag at the security.

To bathe in the kunda, you’ll be given ochre robes by the centre.  You will need to take a shower first.  I was hoping no one would notice that my hair was dry, but they did, and I was promptly sent back to the showers to rinse my hair.

The kunda is artfully designed.  As we descended the large stone steps, I was reminded of the Kamakhya temple.  Unlike the Kamakhya temple, the Chandra kunda is man-made and designed to be rustic yet elegant.  It is carefully cultivated class – a 5 star temple water tank – as Sowmya puts it.  Silence is mandatory here, and it seems to reverberate within the tastefully designed stone dome of the kunda, adding to the somber mood.  There is a small waterfall on one side and as I descended the metal stairs on one end, I felt the weight of the heavy silence closing in on me.  The kunda is windowless, and the cold water is about 4 feet deep.  There is a huge shivalingam in the centre – made of a stone base and a metal dome jutting out of the water.  We circumambulated the lingam in the water, savouring the resistance of the water on our relaxed limbs, the splashing sound soothing to the ears too.

Once we exited the Chandra kunda we decided to visit the Bhairavi Temple.  This too has a cave-like structure and early in the morning the sounds of the aarti and accompanying chanting were steadily reaching a crescendo.  The devotees were engrossed in their devotional practices, and there was no social distancing.  Not too keen to be a part of the melee we decided to exit.

We continued practicing our silence as we entered a doorway to get to the famed Dhyana Lingam.  On either side of the hallway leading to the Dhyana Lingam there are stone murals depicting various scenes from mythology about devotion.  Sowmya and I were happy to see a huge statue of Sage Patanjali.  The Dhyana Lingam is housed inside a huge dome shaped hall specially made for meditation.  The shivalingam stands tall and imposing in the center of this hall and is decorated with flowers.  There are squares compartments cut into the walls to sit and meditate in.  There is no artificial light here, and the style is similar to the Chandra kunda – stone, understated, elegant.  For a fee you can also light a lamp and offer rudraksha of various prices to the Dhyana lingam.

Sowmya and I found a square each and enjoyed some of the serenity for half an hour.

After a bit of shopping at the gift shop (I picked up their famous sambramani) and some breakfast (steaming hot idlis and some pongal), we decided to walk past the famous tamarind tree and the nandi in front of it.  The Nandi is five times the size of a real one, and made entirely of black stone.  The tamarind tree is covered with threads and other pieces of cloth (mostly fuchsia, red or black).  Those who complete the challenging Shivanga sadhana gain the privilege of tying these cloths/threads on this tamarind tree.  The Shivanga sadhana is a special 42 day sadhana that only the most devout can complete.  It is believed that our sweat contains our samskaras and when these are absorbed (along with our sweat) into the clothes we wear.  By tying these clothes around the branches of the tamarind tree, we rid ourselves of our samskaras.

The experience of the rituals and worship at Isha yoga differed so much from our experience at the Perur temple, just a few kilometres away.  It is said that there are as many beliefs as there are people in India.  Experiences like this one certainly gives us insight into just how complex, intricate  beliefs, culture and traditions can be.

Why Yama and Niyama?

The philosophy of yoga has 8 limbs (ashta anga = eight limbs).  The first two of these are:

1.  Yama – These are the set of ‘don’ts’.  They can also be considered to be universal moral commandments.  Patanjali laid down these principles as general ethical principles that must be followed on a daily basis.  These are:

2. Niyama – These are the set of ‘dos’.  Practicing these leads to self restraint and thereby self purification.  These are:

Because yoga is the path to enlightenment, it is important, necessary and imperative that yama and niyama be followed.  Without these yoga becomes just a physical practice of asanas.  That’s like having a Blackberry and only using it to make and receive calls.  However, a Blackberry can be used to schedule meetings, check your mail, chat, listen to music and so on and so forth.  If yoga is practiced with a view to only reap the physical benefits, then you are merely scratching the surface of an ancient philosophy which can add so much value to your life.