Every once in a while
wipe the makeup off
slough off the dead skin of
past experiences.
Exhale.
Climb out from
under the weight of
the shoulds and should-nots
Let the wind
unfurl your hair
a flag wild and free.
Let your skin
flower in the soft sunlight.
The lines around
your mouth
your eyes
Glorious. 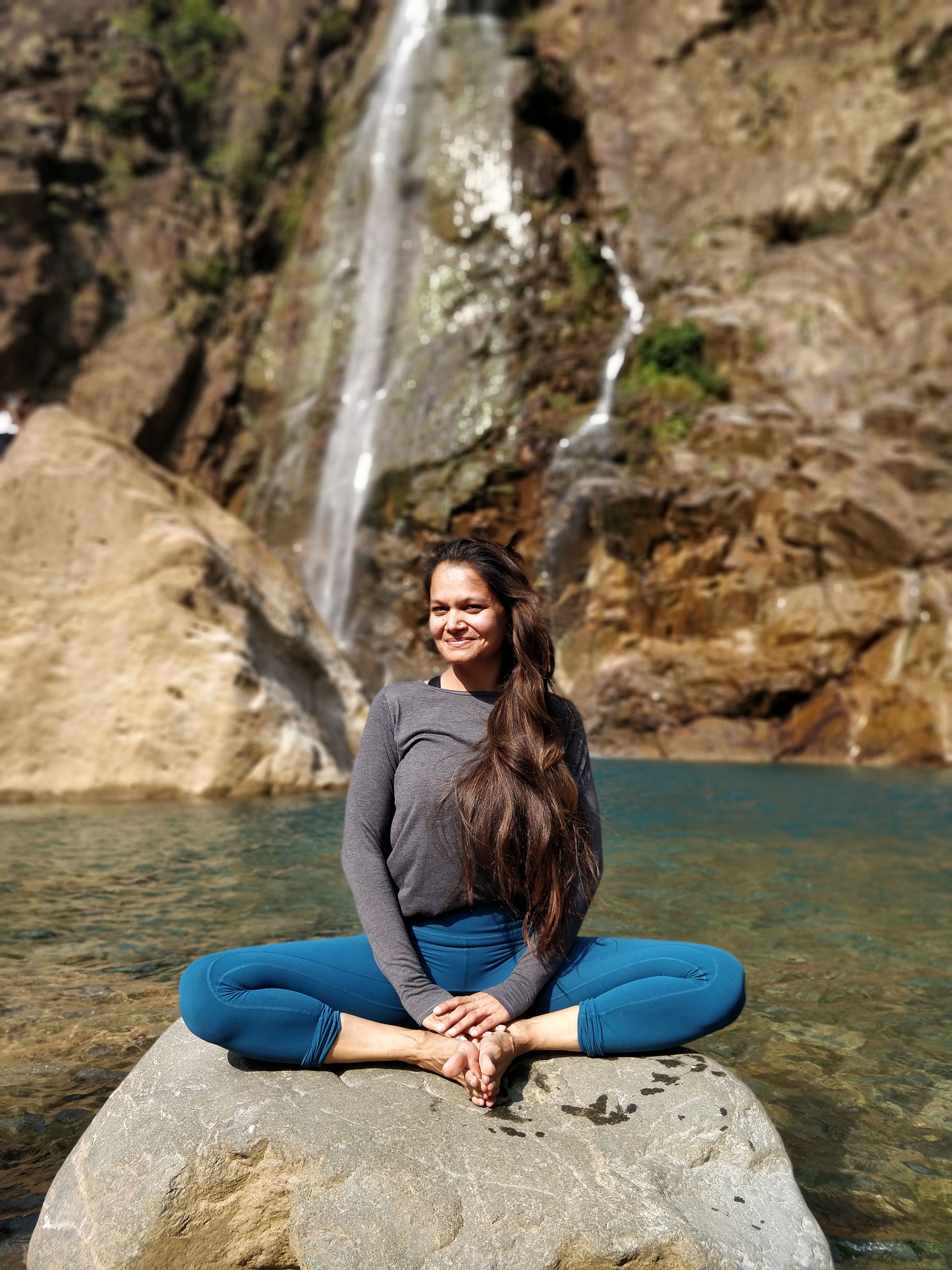 At Rainbow Falls, 2.2 kms from the Double Root Bridge in Cherapunjee

The Perahera That Wasn’t

The last day in Sri Lanka we thought we would check out city life. It was Poya day and we stumbled upon the preparations for the Perahera. Poya days are the full moon days every month and are holidays. This particular Poya day was also the Navam Perahera Festival. Preparations were underway for a massive parade that would include elephants, dancers, acrobats and the like. We were excited to see the crowds and the buzz. We had planned to see some of the famous Buddhist temples in Colombo, but they were all closed. Although we noticed that many foreigners with ‘special passes’ were being allowed in. Shady business.

We didn’t have the patience to wait for the procession to start, nor the energy to brave the crowds. So we decided to head to Keels, a local supermarket to see if we could do some last minute shopping. All of us picked up some tea, Sri Lankan pickles and some spices.

Finally we took an Uber back to our hotel to sit on the terrace for dinner, as the moonlit waves crashed against the shore.

The next day we took an Uber to the airport. As we were driving through Colombo, I was reminded of the city I call home. I penned my thoughts down and you can read them here.

Below are a few more scenes from the vacation. If this is the first blog of the Sri Lanka series that you’ve landed on then click here , here and here for the other two blogs.

Teaching in Tangalle was great. We stayed in a small beach hotel called Coppenrath House and I taught class as the sun came up.

From Tangalle the closest surfing beach was Hiriketiya beach. I’ve been surfing in Auroville so this would be my second time. We decided to do a class and have the instructor coach us. The waves here were larger and a bit more wilder than in Auroville. But it was fun. My surfboard was heavy, I had salt in my nose, but by the end of the lesson I had balanced a couple of time. I did fall hard on my butt once, and had a bruise for a couple of days, but it was great to hear the instructor nod and say approvingly – “You! Where you from? First time surfing? You’re better, you’re better.”

This was a last minute addition to the itinerary. My sister was interested in seeing the elephants but traveling all the way to Yala wasn’t something we wanted to do. Luckily I found Udawalawe. We hired a driver to take us to Udawalawe. He was quite resourceful. On the way he pointed out a tree full of bats, a snake slithering across the road and a monitor lizard. And when we finally reached the sanctuary, he even knew the jeep we could hire for the safari.

From Udawalawe we headed to Mirissa. Mirissa is slightly more commercialized as compared to Tangalle. So there are a lot more souvenir shops and vegan options on many menus. My sister and I actually bought matching elephant pendants from one of the jewellery stores in the road near our hotel.

Most people don’t know that the largest blue whale in the world is found off the coast of Sri Lanka. The Lankan government conducts standardized tours. These start out early morning. At the recommendation of one of our drivers we chose Eagle Eye Tours for our whale watching experience. They provide you with tea/coffee, breakfast and an anti-seasickness pill for the journey. It takes an hour or two to get deep into the ocean, after which the whale sightings start. We saw blue whale, fin whales and so many dolphins. It was amazing.

The next day we hired a taxi to take us along the coast down to Tangalle. On the way we had planned to stop at Galle.

Our driver, Mical, sauntered in 45 minutes late. Soon after we started, he asked, “Sir! Ravana – what do you think? Good man or bad?”

Unsure of the most politically correct answer, I decided to take the middle ground, “He’s a complex character, with good and bad shades so it’s difficult to say. And what do you think?” I asked him.

“Ma’am sir! We think he is very good, but only one problem. He abducted Sita Amman. Otherwise everything else very good.”

“Ma’am sir! We think he is very good, but only one problem. He abducted Sita Amman. Otherwise everything else very good.”

Sri Lanka is known for its gemstone mining. Mical, stopped a little short of Galle at a gem factory where we got to see the process of mining moonstones, the process of refining them and finally creating jewels out of them. Ana and I both got a matching moonstone pendant as a souvenir from the mines.

This was an unplanned stop for us. None of us had any idea about the amazing work that this centre is doing in terms of rescuing and rehabilitating turtles. The tsunami of 2004 affected the marine life, displacing, maiming and killing much of it. The Marine Turtles
Protecting Centre works with turtles to enable them to one day return to their natural habitat.

Galle is one of the major cities of Sri Lanka. The Portuguese built it as a major port city and the Dutch later went on to use it as one of the major ports of the country. We spent a long time walking along the cobblestone streets, ducking into souvenir shops, taking photos and sampling the local food. The National Maritime History Museum is in Galle, but we only had a couple of hours and wanted to spend it walking around the city. I’d read about Galle Things Roti, a restaurant specializing in rotis and curry and we had some great lunch there. I was also keen on having tea at the Amangalla hotel, a historic heritage hotel. While their tea isn’t special, the hotel has a lot of antique furniture which makes the ambience and the experience unique.

We reached our destination a little late. Tangalle is a quaint beach town. I was to teach yoga classes here for the next two days.

The key to excellence is repetitive practice. In the ideal world we would all have an hour and a half every morning to devote to our asana practice. We would have eaten light dinners the night before, gotten the necessary hours of sleep, have the energy and the inspiration to practice the same asanas for the millionth time. But every single yoga practitioner knows that there are more bad than good asana practice days. And that’s the method of any spiritual practice. Will you commit with no hopes of a return on commitment?

Every year Iyengar practitioners from around the world make their way to Pune, India to immerse themselves in the practice. Every year I await eagerly for the 4 weeks where I will be able to ‘retreat’ from the rigors of my regular life and give undivided attention to my practice. I usually have a reading list, I introspect through journaling and blogging, and I learn from the experiences of other students.

Retreating is an important part of a spiritual practice. It is to introspect as much as it is to delve deeper into the practice of your choice.

Retreating is an important part of a spiritual practice. It is to introspect as much as it is to delve deeper into the practice of your choice. A learning curve happens after every retreat. I have experienced the greatest growth after every retreat and workshop I’ve attended.

Teaching a retreat is as exciting for the teachers as it is for the students. When the idea of this retreat was a mere spark of an idea, we wondered what we could do to make this retreat unique, fun and helpful for those giving us the privilege of teaching them. We came up with a rough outline of a schedule. We started to think of how we could bring life and relevance to the teachings and the days slowly took shape. Involved as we are in our own practices, the results of a collaboration between Suzanne and I will distinctive.

Our mornings will be spent studying the asanas, in which we will also discuss the Indian/Hindu mythology pertaining to yoga. Our evening sessions will be about winding down the mind and body. There will be walks through the town, swims in the creeks. Conversations over shared dinners and the occasional glass of wine!

It will be a special time for all of us, made more special by those who give us the opportunity to guide them. We hope you can make yourselves available from the 1st-8th of June to join us in Liguria, Italy for a retreat to remember.

[This are article has also been published at https://yogaliguria2019.blogspot.com/2019/02/why-retreat.html. You can find more information about the upcoming retreat in this link.]