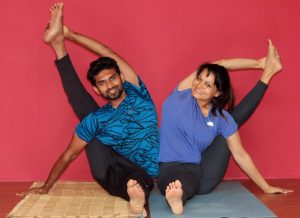 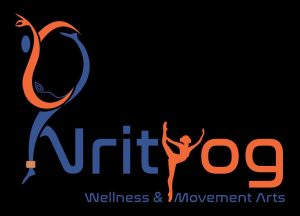 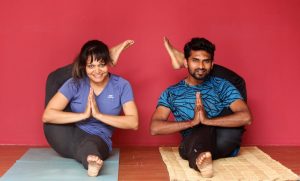 Stretching – Then and Now

It’s been close to 10 days here and my routine here is as challenging as ever.  I realize that if it’s your first time here, then it does take a while to adjust and adapt.  The first time I had a 4 hour practice I was incredulous … and didn’t know how to deal with it.  Rather, I didn’t know how to make the most of it.  When I practice at home it’s only for an hour and a half, and by the end of it I’m drained out.  So the first few days here, I was always exhausted.  So much so that I felt I couldn’t give the best in the asanas and always felt sloppy and ungainly throughout the practice.  Mondays and Tuesdays specially, since practice on those days is almost 4 hours long, and by the time I’m done with practice its an ordeal just to walk home.  My fantasies these days centre around buying an apartment next to the institute so that I can crawl home in no time and surface again only for the next class.

However, now I’ve started to get used to the routine.  I’m actually able to make the most of the extended practice sessions.  In fact, 2 hours is just about enough time for a satisfying practice…how I’m going to sustain this when I’m back in Bangalore is the stuff other blog posts are made of.

Yesterday I had my class in the evening (where I’m referred to as ‘Bangalore’, and another

girl is called ‘USA’, oh and then there’s ‘Madam China’ in the 6 am session).  It was an amazingly intense session.  The class was fast paced with a focus on stretching the lower body (Janu Sirsasana, Paschimottansana, Baddhakonasana etc).  Finally we did the Upavista Konasana, which is a challenging pose for me.  I slowly made my way down and eased my torso onto the floor.  I remember the days when I started practicing yoga and this pose was a big challenge.  I wouldn’t be able to extend my back and my hip joint was stiff.  As the years went by, I was still pretty reluctant to practice this pose because it didn’t come naturally at all and it was frustrating.  Even now, sometimes I’m able to execute this pose well, and sometimes I feel like lead.

Yesterday I was able to ease myself down and placed my forehead on the floor.  I stayed there kind of happy and satisfied with myself.  There’s always an element of pleasant surprise also, because some days your body can extend and some days it just doesn’t.  This reverie lasted until I heard, “BANGALORE!  You’re sleeping!  Extend more!  Walk forward with your hands!!!  That’s it, that’s good.  Trance mein chali gayi thi phir se.”

And I realized that for the most part, this is how I practice.  I arrange myself into a pose and then my mind says, “This is it, you’ve done well.  You’re done.”  And then my pose goes dead, and progress stops.  Or, as the teacher said, I fall asleep.  So when I was told to extend more, I had to push through the limitations of my mind (kind of still the internal dialogue) and discover if I could, in fact, go further.  I realized that I could, and for that little bit of time I experienced new life.  And received a bit of enlightenment.

The Halasana is a pose that we do daily in class.  We use props to ensure that the spine and neck are straight.  The picture is of me doing the Halasana many years ago.  When my internal dialogue was loud and overpowering.  I’m sure it’s improved over the years.  And after this class, I know how to work in this (and in all other asanas).

It’s hard to stay focussed and committed.  To any kind of routine.  Specially the kind of routine which may require you to wake up early and be on time for a fitness class.  If your class is later in the day then you have to ignore every single excuse that might crop up for why you can’t be at the class, and just go to it.  We all know we feel better post our yoga sessions, but why do so many people start with being regular and then lose steam?  I’m not sure.  But maybe there are a few things we can do to stay motivated, and at least to get to class despite not feeling motivated.

1. Join a class. A friend of mine used to go to the most expensive classes available because she would feel compelled to go so as not to waste all her hard earned money. It worked for her, it might for you too!

2.  Whether the class is expensive or relatively cheap, make friends with people in your class.  Or, better yet, join a class with a friend.  So when you feel like staying in bed, then there will be someone to pull you out and into class.

3.  If going to class is not possible for you then follow one of the numerous health/fitness blogs online and do routines in the comfort of your own home. But this does require you to prowl the web looking for videos which inspire you. These videos should feature routines and instructors who you want to spend an hour with every day. You may eventually get bored of the same videos, or you might exhaust someone’s videos. Then you need to start your research all over again and find other videos which will keep you on track.

As a start watch my videos and give me cmments and suggestions for the kind of videos that you feel can help you!

Which Category Are You? 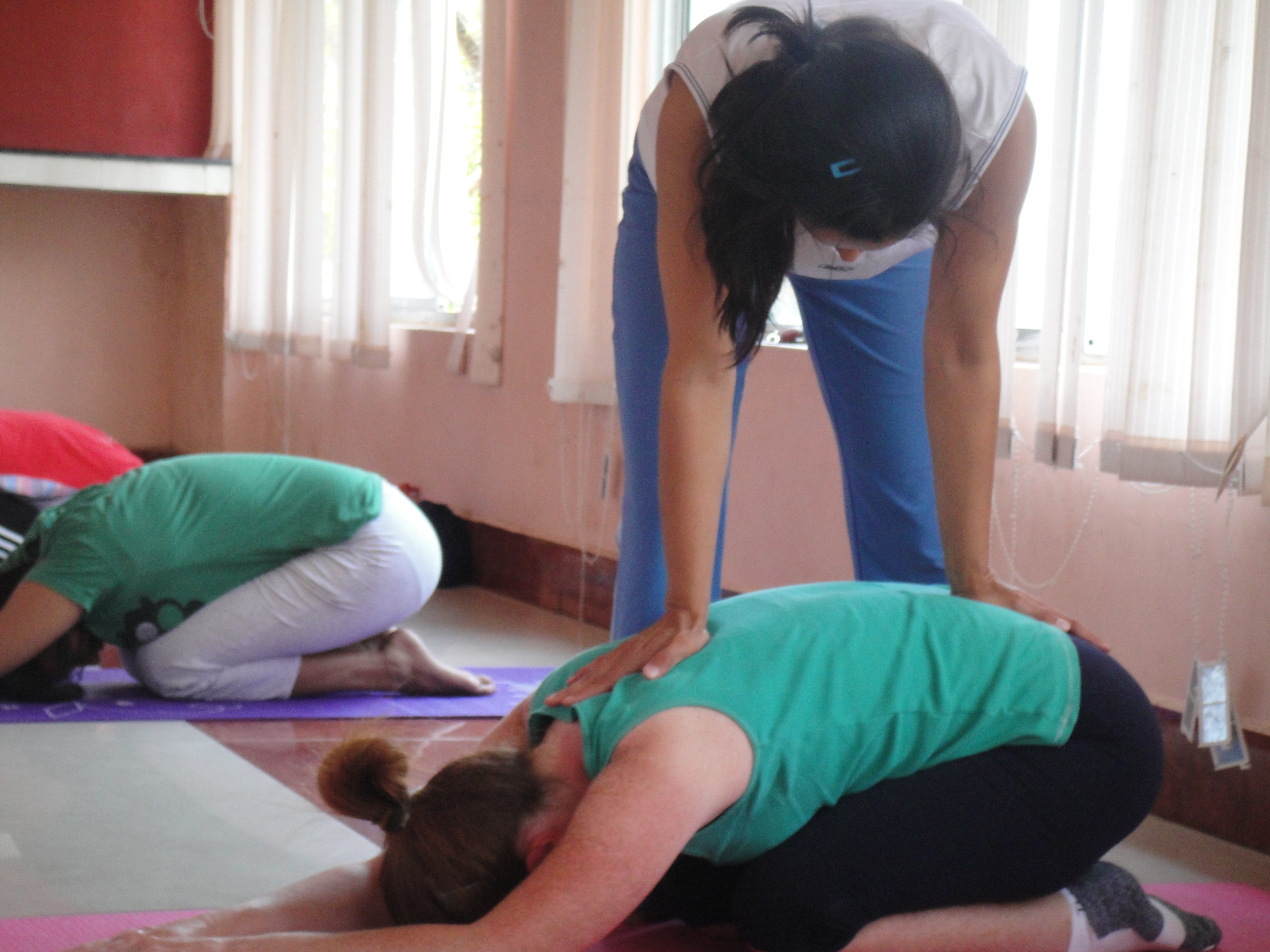 Today I concluded the first month of teaching here in Bangalore.  When I started the class, there were about 8 enthusiastic people along with 2-3 others who dropped in out of curiosity.  Some wanted to see what ‘yoga’ was all about, and some to see if the class was worth the money being charged.  After a month of waking up early and trudging to the class braving the cold winds, I have 5 students who come regularly.

I’ve been to numerous yoga classes over the years as a student.  And I repeatedly see this trend.  Classes start out full and then students begin to drop out.  I used to think that it’s the teacher’s responsibility to keep students coming back, to keep the tempo of the class going and to design routines that students will enjoy.  After all, a teacher is supposed to provide a class that appeals to students.  And if students don’t like the class, well then, the teacher should introspect and do something about it.

However, over the past couple of days I’ve started to think that its as much a student’s responsibility to be wake up and show up, as it is the teacher’s.  Sadly, when the temptations and excuses to stay in bed are numerous, and the reasons to show up to class so few, there are not many who possess the self discipline to get to class.

1.  The lazy bones.  Those who will not sustain a regular yoga routine, or, for that matter, ANY kind of routine.  Making space for a class in a busy schedule is not easy.  You either have to wake up when everyone around you is snuggled comfortably in their warm beds, or trudge to class after a tiring day at work and all you want to do is sleep for the next 2 days.  It takes great effort to leave the warmth of your bed, change, pick up the mat and head to class.  Even more so when it’s cold and windy outside.  I’ve seen that those who don’t come, won’t come despite relatively easy schedules.  I feel that a sense of commitment kicks in for these people only when something goes wrong, ie. doc tells them to lose weight.  And then they go into weight-loss overdrive and might end up hurting themselves more in the process.

2.  Those students who are a bit more aware and enlightened.  They do sometimes run out of steam and need encouragement from the teacher, but on the whole they are committed and contribute effectively to the vibe of the class.  These students are a great addition to the class because once in class they are attentive and 100% involved.

3.  The self-motivated student.  These people are committed, aware, and involved.  They ask questions, listen very carefully to what the teacher has to say, and at times they have something of their own to contribute.  They proactively read up on health and wellness and have a high degree of committment to themselves, their bodies and their mind.  They are a delight in class.  These students are a motivation to other students as well.

And as I told my students this morning, I’d rather teach a smaller but committed group than a large group of semi-focused people.

Can you classify the people you know in the above categories?