‘Verse 32 of the First Chapter of the Hatha Yoga Pradipika states: ‘Lying upon one’s back on the ground at full length like a corpse is called Savasana.  This removes the fatigue caused by the other asanas and induces calmness of mind.’ (Light on Yoga, p 422)

And we’re finally at the end of our Immunity Sequence.  In the past few weeks many of us have incorporated these asanas into our daily yoga routines and it’s been incredibly gratifying to see everyone stick to yoga routines and, quite frankly, make the most of a bleak situation.  I do feel that once we’re through this #21daylockdown, we will see that our individual actions actually did make a difference.

Svasana is also called the Mritasana.  Sava and Mrita means a corpse.  Your main objective in this asana is to simulate a dead body.  A dead body has no movement, and no thoughts (wherein lies the challenge).

No contraindications!  Anyone and everyone can and should practice the savasana.

Savasana is everyone’s favorite posture.  It’s often treated as a posture where your body rests.  However, in this posture your mind is also supposed to remain still.  And this is what makes this posture the most difficult.   Read on for some practice pointers…

Stay tuned for more from our Yoga to Boost Immunity Sequence.

On the Yogi’s Bedside

‘Light on Yoga’ is currently with a student.

All yoga practitioners reach a point when they start to look beyond their yoga class for resources to explore more.  Some look for more guidance and some for answers.  Usually we turn to the internet and look up all the books and their reviews we can find.  We start to look for teachers and students see if we can find the light through the avenues which they are seeking answers.

There are many many books written on the subject of yoga.  From coffee table books to instruction manuals.  YouTube gives you access to teachers old and new.  I’ve been through my fair share of texts.  Some have been forgettable, some have been good and some I consider essential.  The books below have not only given me food for thought, but have also helped with my asana practice, philosophy etc.  I still have a bunch of books that I’m waiting to devour (birthday shopping), but until now, the below are books I consider indispensable 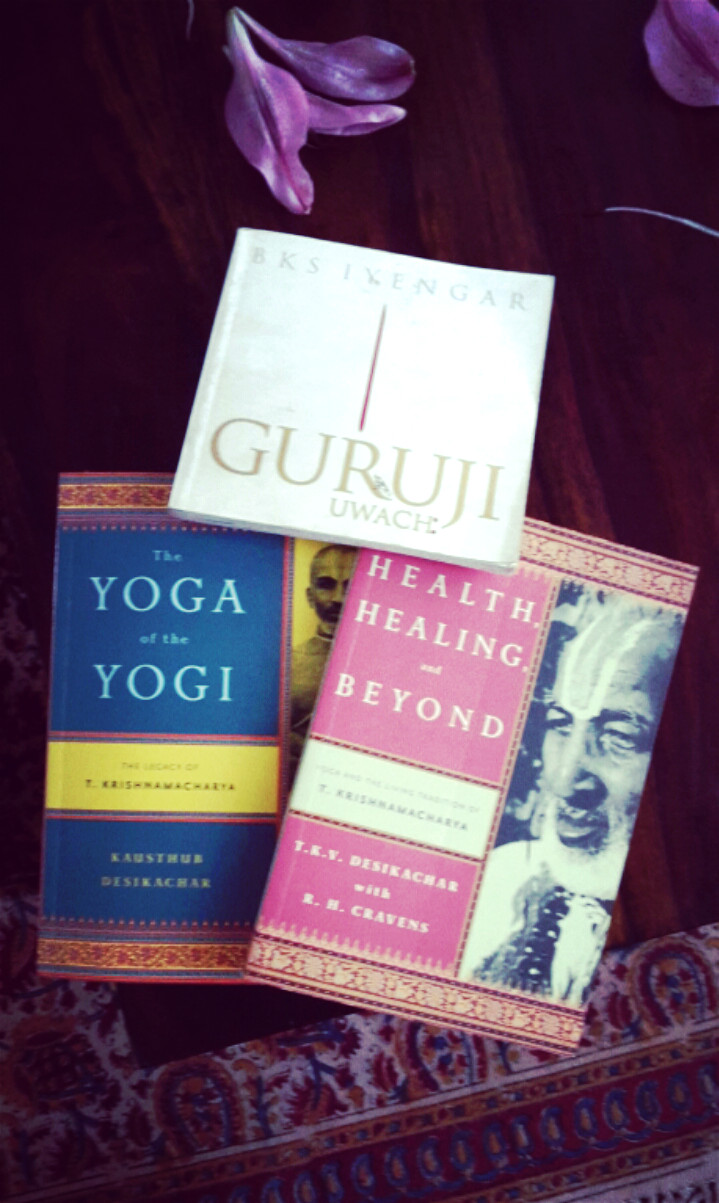 The only kind of shopping I can indulge in.

Of Sex and Yoga….

Having been a practitioner for a long time, I’ve had my share of strange questions about yoga.  Most of these are about sex.  Everything ranging from yoga leading to impotence to yoga leading you to become a sex maniac.  However, over the years Yoga has spread far and wide and a lot of misconceptions have been dealt with.  Which is why yesterday I was caught by surprise.

I was hanging out at the library in the Bangalore Club waiting for the time for my massage appointment to arrive, and on the front page of the International Herald Tribune I read : Yoga and Sex Scandals: No Surprise Here.  I flipped to page 12 and then read the most unbelievable article about the orgins of Yoga.  Yes, Yoga and Sex do  have a relationship, but that is limited to the effects of Yoga on your overall wellbeing, which in turn enhances your sexual health.  However, according to this article, Hatha Yoga began as a branch of Tantra which in turn is steeped rites and rituals which include sex, having sex and everything else related to sex.

The ‘goal’ of Yoga (all kinds of Yoga) is NOT to increase your sexual appetite.  Much the opposite, in fact.  Yoga asanas were ‘discovered’ by sages in ancient India who had to sit for hours in meditation.  Their bodies had to be supple and strong to be able to tolerate that kind of intense treatment.  By doing asanas and pranayam, the sages were able to keep their bodies free from all diseases, and thereby free to meditate.  And THAT was the real purpose of yogasanas, and it had nothing to do with increasing sexual energy.  Quite the contrary, a lot of sages wanted to eliminate/decrease their sexual energy becuase it was a distraction from their sadhana.

William J Broad (the author of this article) went on to talk about B K S Iyengar played down the eorticism of yoga in ‘Light on Yoga’.  And also that modern day practitioners have to be content with this ‘whitewashed’ version of Yoga.  I call this pure hogwash.

Yoga has been practiced for millions of years by regular people who have experienced numerous benefits.   From thyroid problems, to hypertension, to depression to obesity, studies have shown Yoga to have cured a lot of people of a lot of ailments.  In fact, people experience better sex as a result of yoga but this is not because it gives you more sexual energy.

I think it is wrong to blame Yoga for an individual’s philandering ways.  Yoga gurus who cheat let their fans down much as movie stars who cheat do.  In fact, I would say that a person who has no self control is not a real yogi, regardless of how advanced their asana practice is.  And that is a bigger tragedy than someone’s philandering lifestyle.