The OG Yoginis of Raipur Jhariyal : A Confluence of Beliefs

I don’t quite remember when I came across the cult of the 64 yoginis.  It was probably during my ongoing search for the reason for the absence of a strong feminine presence in the history of yoga.  It’s a paradox – today women practitioners outnumber men, however, there’s a marked absence of them in history.

That’s when I came across the 1986 book titled ‘Yogini Cult and Temples – A Tantric Tradition‘ by Vidya Dehejia.  Inspired by that book, I landed at the Swami Vivekananda Airport in Raipur with a motley of friends.  Sowmya, who was as intrigued by the yoginis as I was; Mamatha, interested in textiles; and Animesh, who has signed up to accompany me on all the adventures of Life.

Definition from the Monier-Williams Sanskrit Dictionary.

Today the word yogini means a female practitioner of yoga.  But the yoginis of the 64 yogini temples don’t depict yoga as we know it today, which is largely asana.  Instead, these yoginis are symbols fertility, vegetation, illness, death, yoga and magic.  In a land comprised of dense forests and often isolated tribes – it is no wonder that the cult of the 64 yoginis is supported by local lore and beliefs.  Many believe these yoginis to be the female counterparts of male gods – such as Ganeshani and Narasimhi.

The 64 Yogini temple still draws many a devotee. This statue is unmistakably Ganeshani, aka Vinayaki.

The Yogini Temple at Ranipur Jhariyal

The Yogini temple at Ranipur Jhariyal was built in the 9th – 10th century, during the era of the Som Dynasty.  Some scholars believe that the yogini temples are linked to the legend of six strong and independent queens who are fabled to have ruled Odisha.  These queens are mentioned in texts such as the Kalika Purana and the Yogini Tantra.  No archeological evidence has been found (yet) to corroborate this theory.

The first view of the temple gives you goosebumps – there’s a palpable power here.  The temple at Ranipur Jhariyal was discovered in 1853 by Major General John Campbell (a Scottish Army Officer posted to British India) and was one of the first yogini temples to be discovered.  The barrenness of the landscape is striking.  Vidya Dehejia (and Campbell) mention that this temple was remote , but in the India of today, it no longer is so.  Cultivated farm land surrounds the temple complex now, and the landscape is dotted by farmers in colorful saris.

Another thing to note is that contrary to popular conception, the temple wasn’t isolated.  I’d say the temple was very much integrated within the religious and spiritual cultures of the time.  In fact, it’s part of a huge complex that includes Shaiva, Vaishnava, Buddhist and Shakti sites.  It appears that the yoginis were neither feared nor shunned, in fact they had space to exist harmoniously with other practices of the time.

The Buddhist connection at the site. This carving is on the doorway of the sanctum sanctorum of the Shiva temple nearby. There are Buddhist meditation chambers spread across the hill where the temple is situated.

There are 66 cells in the temple, of which 5 are empty.  The others contain a sandstone statue of a yogini.  Although it is hypaethral (without a roof), there is a sense of being enclosed by it.  The site of the temple receives many visitors – taking photos, hanging out with friends, picnicking – but once you step inside the temple, you feel you’ve entered a vacuum – voices become a bit muffled, and you automatically start to speak in low tones.  Here and there you see flowers at the feet of some of the statues – reminiscent of undying devotion.  The large Shiva statue in the centre of the circle is also red with vermillion – and indication that this place continues to be a site of active worship. 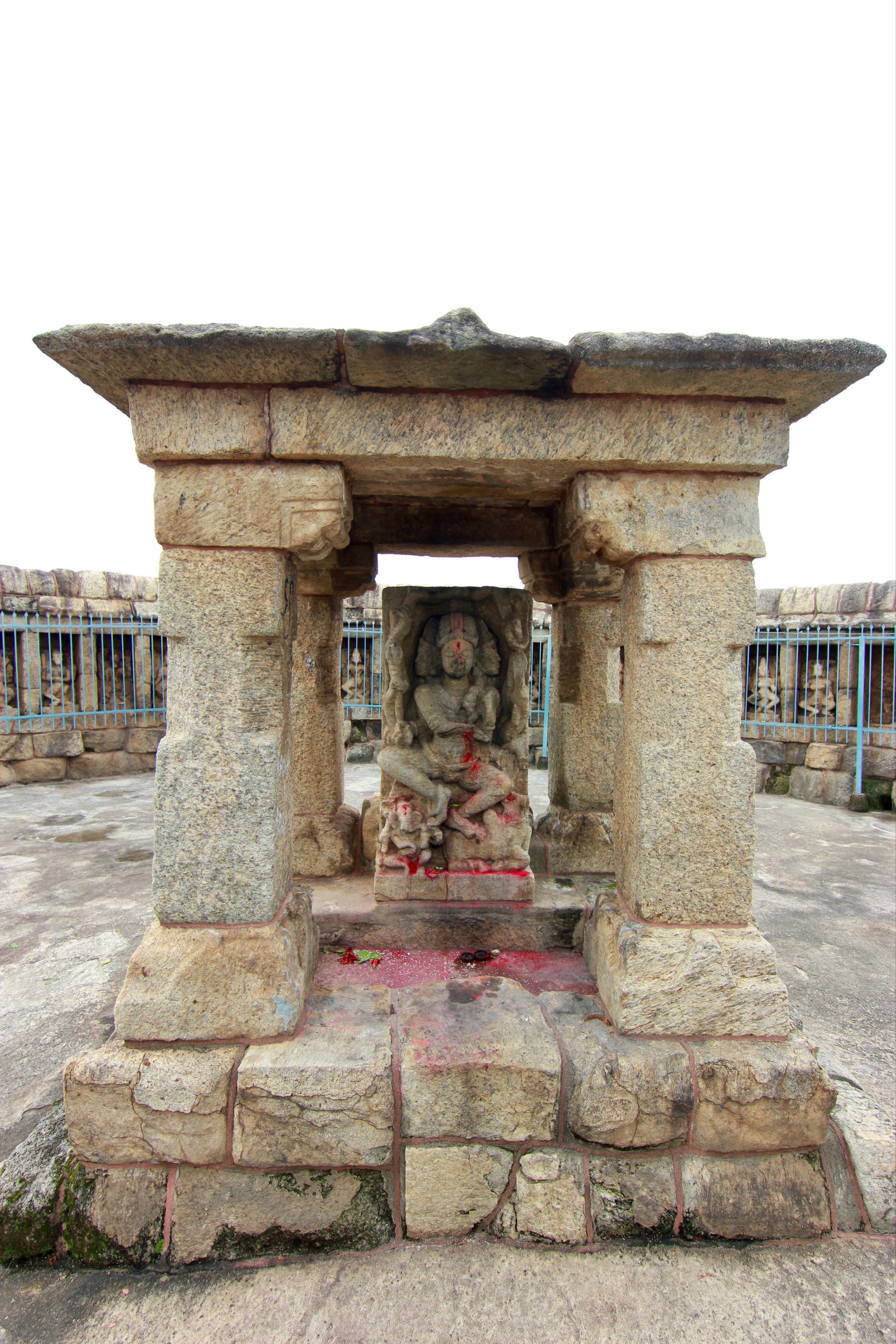 The majestic Shiva – believed to be the only one who can ‘control’ the Yoginis.

We found out more about the temple when we spoke to Mr. Manikchand Jain.  He heads the temple trust of the Shiva temple which is a part of the same complex.  He elaborated on the confluence of religions that the site represents, and emphasised that it was still considered a place of immense power.  According to him, tantra practitioners often come to this temple to perform rites and rituals.  However, the temple trust and the local government has outlawed these practices.  It is believed that on amavasya the yoginis leave their circular abode and congregate in the Shiva temple.  “The sounds of their celebration can be heard in all the villages close by,” he told us. 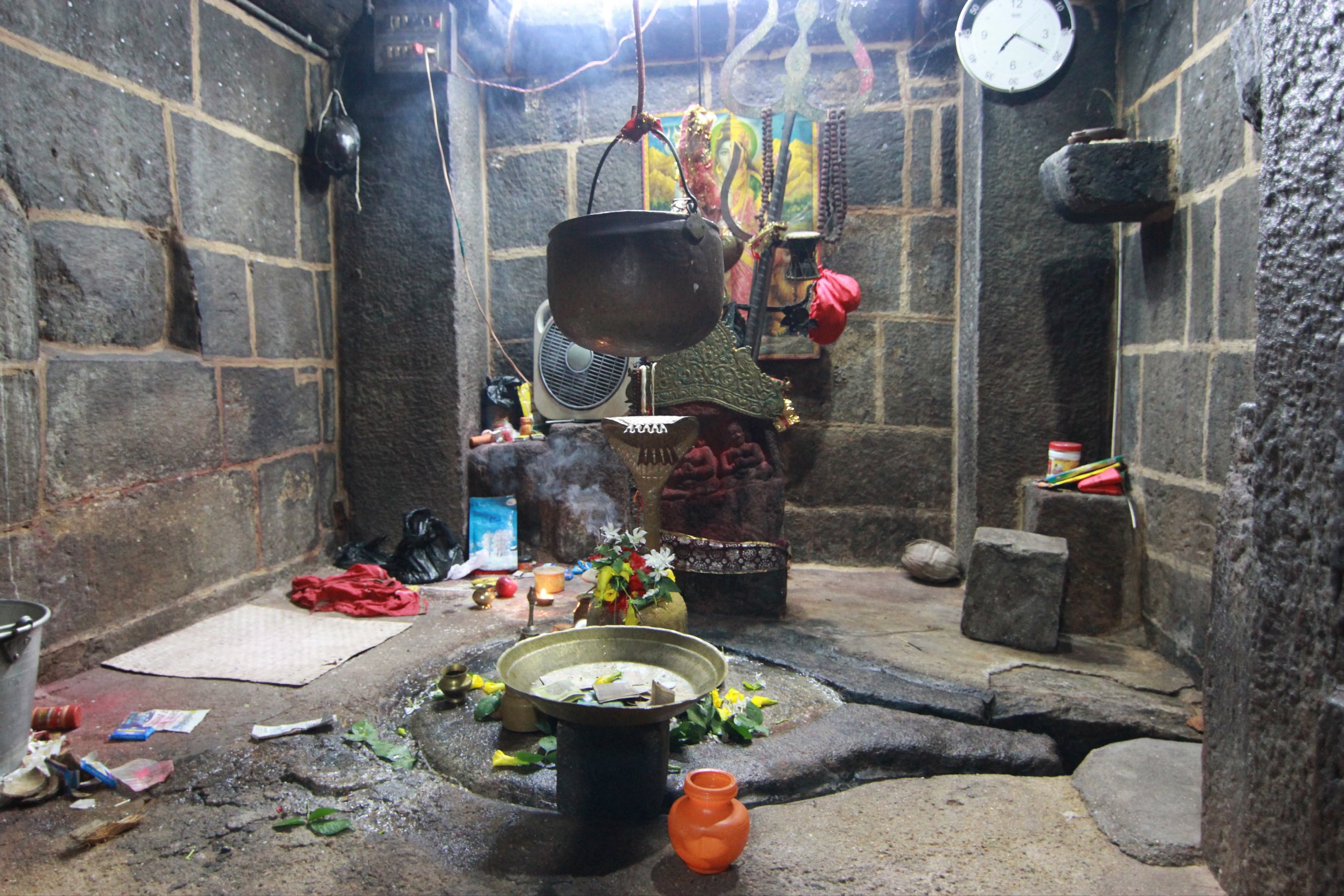 This is the sanctum sanctorum of the Shiva temple close to the Yogini temple.  It’s unique in The Shivalinga is carved in the ground, which is unique. Also there’s a statue of the Ardhanareshwara behind the shivalinga. We were told it’s as old as the temple, and is swayambhu.  To see the aarti here and get the blessings from the priest is a highlight of the trip.

It was a five hour drive to the Banmali Palace hotel – a surprise discovery in the midst of the largely unknown and unexplored landscape of Bolangir.  I can’t recommend this hotel enough – the rooms are spacious, the staff is courteous, and on our last day the chef prepared a sumptuous Oriya dinner for us.  The hotel is actually a wedding destination, and has just resumed operations post Covid.  There’s a swimming pool, plenty of space for long walks and contemplation, and if you have children along with you – there’s lots for them to do too!  For us it was great to be in a place that understood the eccentricities of a bunch of researchers and the whims and fancies of such a group. 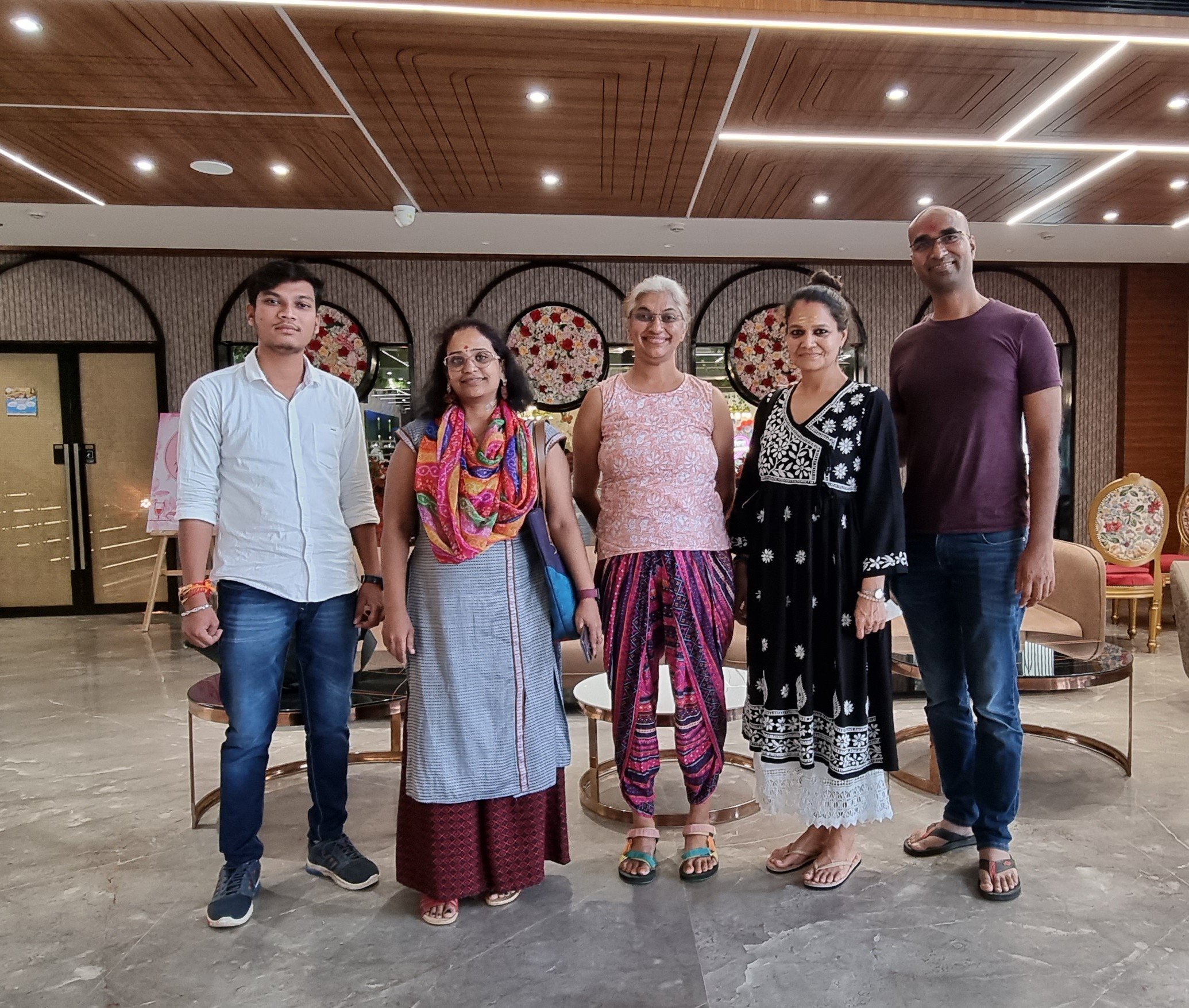 The entire group (L-R): Lambodar ji, our local contact without whom we would have been absolutely lost, Mamatha, Sowmya, me and Animesh.

We were at the yogini temple on the 10th of Aug, 2022.  It was a full moon night, a night associated with the auspicious and feminine.  We were cautioned by the hotel staff not to stay at the site too late into the evening.  The members of the temple trust also told us that the local authorities have banned staying in the area after sundown.  However, we wanted to see temple bathed in moonlight.    As we watched the last of the vehicles rev away in the fading light, our driver told us he wouldn’t stay back, but that he would come at dawn to pick us up.  Unnerved we thought it better to get back to our hotel.

The reason I mention this anecdote here is because a respect for local culture and norms has become a casualty of the rampant tourism of today.  Many people have asked me why we listened to the temple trust or the hotel staff, since ‘I know’ that these are just urban legends and silly superstitions.  Didn’t we want to prove ‘them’ wrong?  Frankly, it was more important for us to respect their beliefs and culture, so when they said no, we listened.  Maybe we’ll be back there one day, with the permission of the local authorities; to observe rites and rituals, with them instead of inspite of them…

It is largely believed that there are only 4 surviving yogini temples today.  However, I believe there are many more. An effort needs to be made to study the temples, the cult, and the divine feminine in Hinduism to cull out other sites that might also be yogini temples.  In the coming months, I plan to dig out a few more. 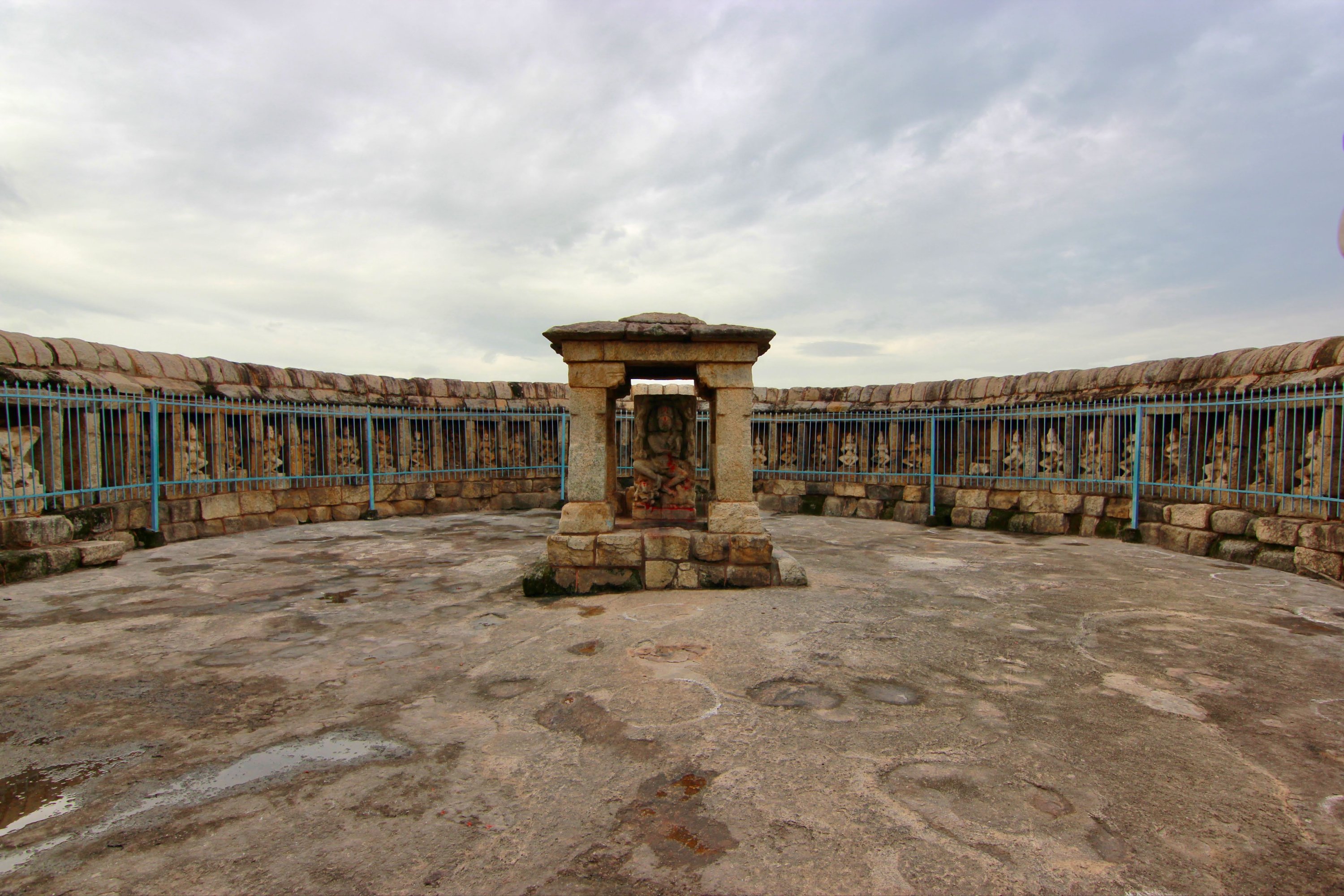