A Temple That Keeps Time – The Vidyashankara Temple of Sringeri 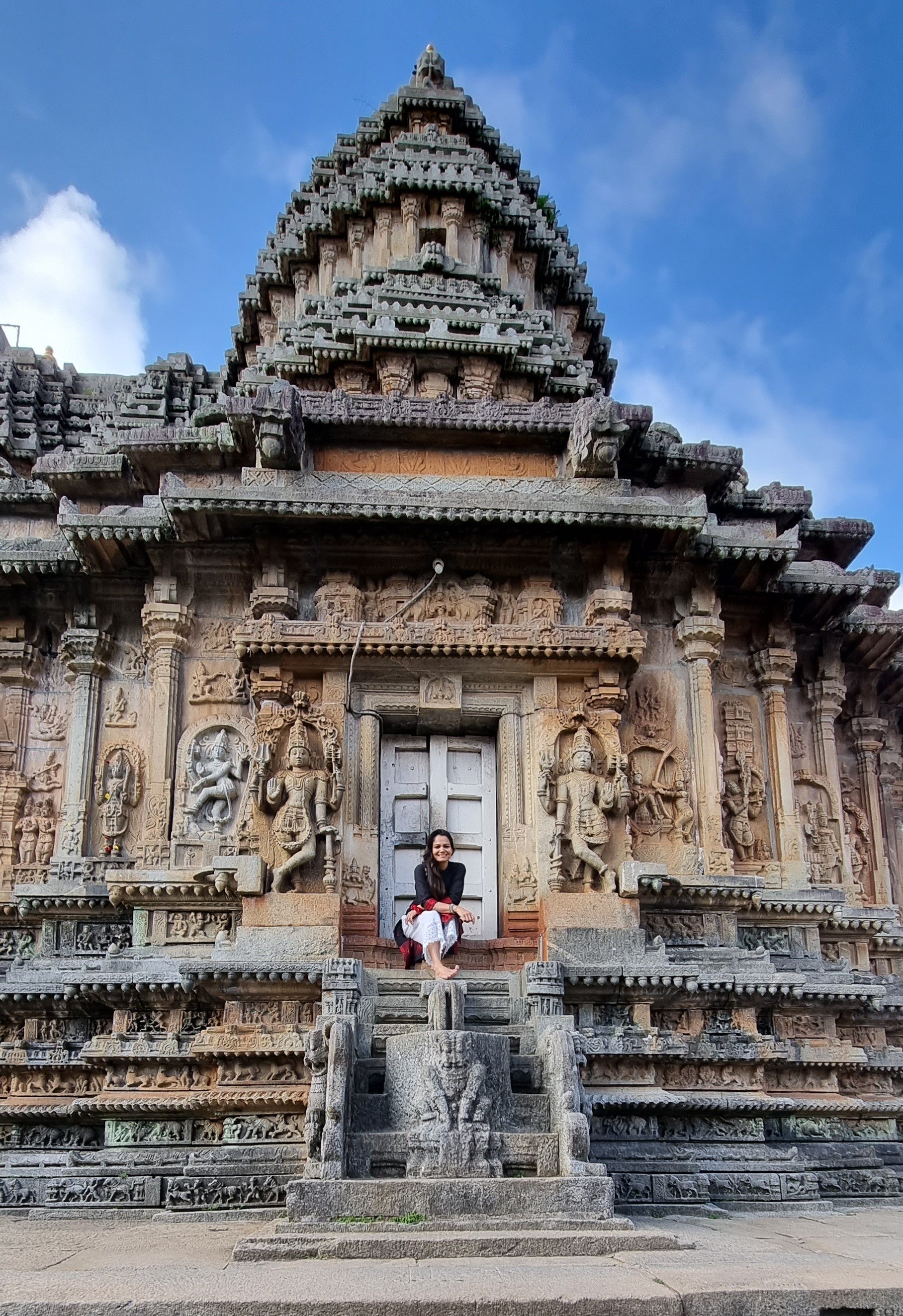 A couple of weeks ago I had the good luck and privilege of being a part of a group of scholars for a trip to the Vidyashankar temple in Sringeri.  The group consisted of various intellectuals involved in the study of the Indic culture.  We had writers, scholars, professors, dancers etc amongst us.  We were to be led by Mr. Viswa N Sharma, author of ‘Sringeri Vidyasankara Temple Astronomical Theater’, a book where he has chronicled his decade long study of the temple.  Of particular interest to us were the pillars of the zodiac found in the mandapam of the temple.

Lately I’ve started to appreciate the art, architecture and history enshrined in the temples of India and elsewhere.  As my yoga studies deepen, I have started to appreciate the interconnectedness between spirituality, worship, history, yoga, dance and Life.  Sometimes I catch myself wondering if this is perhaps an indication of a natural deepening of my interest in yoga – after all, from the gross we move to the subtle – from our asana practice on the mat we move towards the yoga found in our worlds.

The research center was inaugurated in the year 2000 and has over 10,000 books. It also has a vast collection of about 3000 manuscripts, and there are ongoing efforts to preserve and translate these.

The Ancient Town of Sringeri

Sringeri is a quaint temple town up nestled in the Western Ghats.  Its location ensures a moderate temperature year round, a boon to devotees coming to visit the numerous ancient and splendid temples in this place.  A boon too for scholars of Advaita Vedanta doing research at the Sri Shankara Advaita Research Center.  The center is off limits to visitors, but we were lucky enough to gain access and spend time in their library, looking at rare manuscripts and speaking to the scholars there.

This town is also popular on the pilgrim route because Adi Shankaracharya chose to establish the first of his four mathas in this location.  Legend has it that he meditated across from the site of the Vidyashankara temple, and one day as he was coming out of his meditation he saw a frog giving birth and a cobra providing it shade with his hood.  He sensed that there was something holy and peaceful about the land and decided it should be the site of the temple.

Because the temple promotes learning, knowledge, debate and supports study and scholarly pursuits, the energy on the temple premises is unique.  We were granted an audience with the current Shankaracharya and it was my first experience of its kind.  The Shankaracharya exudes an aura of learning, peace and quietude that is relatable.  The faith and belief here is not blind, on the contrary, it is based on reasoning and study.  When the temple learned that we were a group of scholars, they felicitated us with books, prasadam and saris, which made our visit even more memorable.  Many of us also found very interesting books in the bookstore – I’d highly recommend a visit if you’re at the temple.

The Sun Temple at Sringeri

The Vidyashankara Temple is a 14th century temple and depicts a time when Indian temples were also used to keep time.  This temple in particular is unique in that the navaranga (the hall inside a temple sometimes used as a dance platform or a stage) contains 12 pillars dedicated to the signs of the zodiac.  As we circumambulated the temple Mr. Sharma told us that this represents breaking free of our entanglements with the world.  We walk barefoot in temples and other places of worship to allow the sacred energy of such places to permeate our bodies.  Mr. Sharma also told us that the structure of the temple represents our movement from the gross to the subtle to reach moksha.  The act of going to a temple is symbolic of our journey from this realm to the next.

The intricate carvings on the temple walls. We spent substantial time studying the workmanship of these carvings. 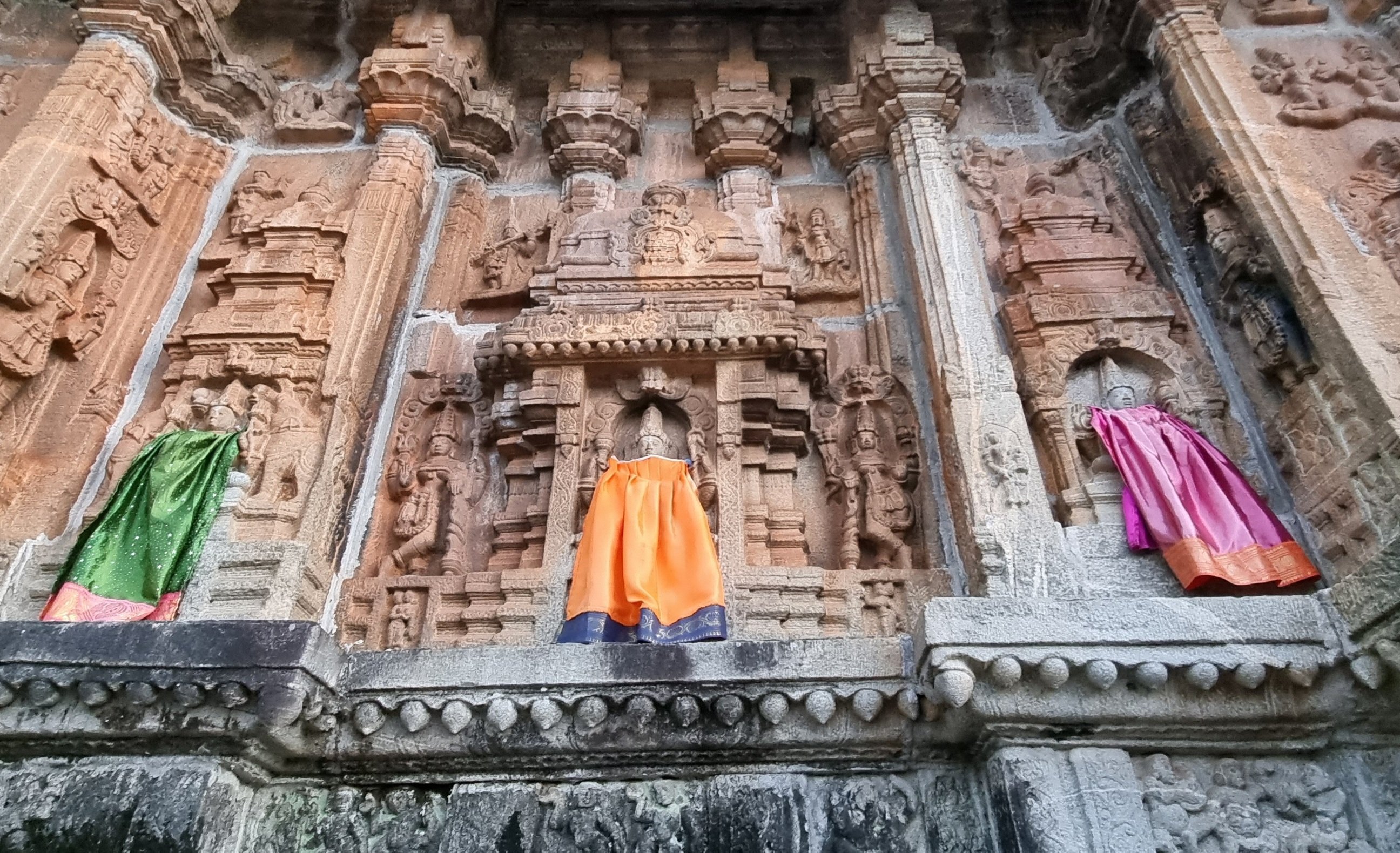 The divine feminine – worshipped here and in all temples. This is on the outer walls of the temple. 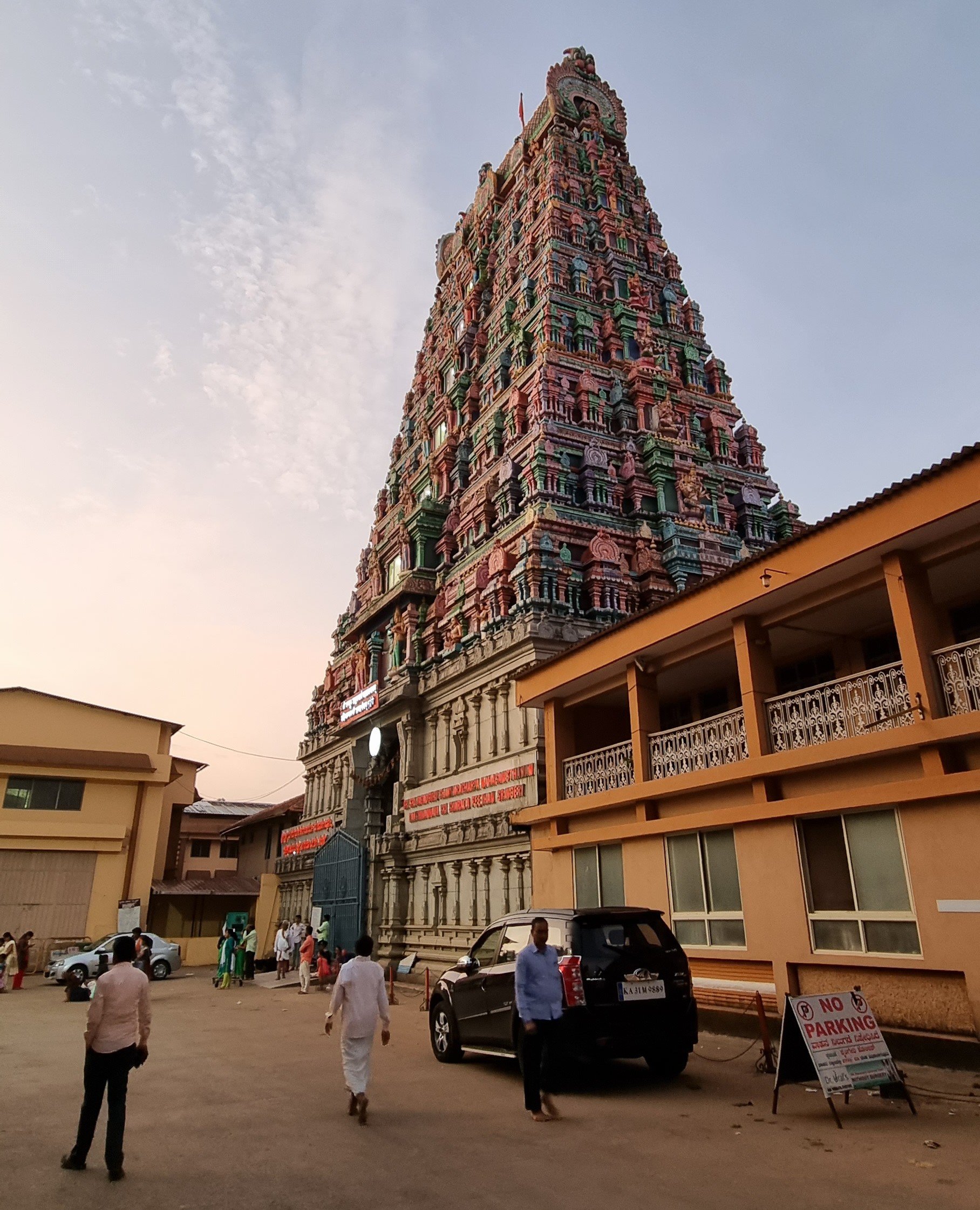 The beautiful gopuram early in the morning. Gopura means the light of knowledge, according to Mr. Sharma. 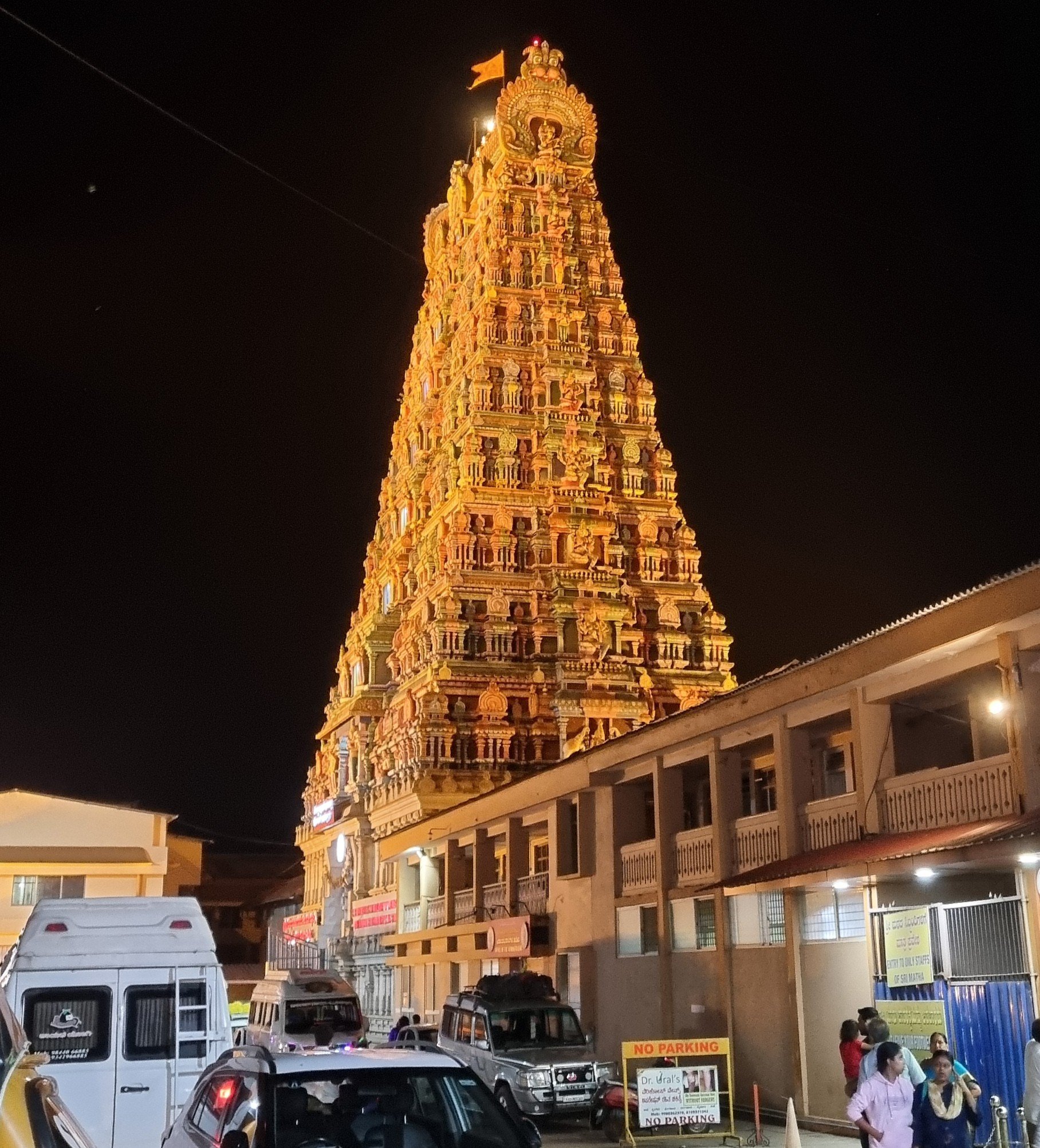 The best thing about staying in the temple complex was getting to see it all lit up in the night.

As usual, my attention was constantly drawn to the yoga connection, and I found a lot of carvings on the temple walls depicting yogasanas.

Look closely – arm balance with one leg behind the head.

Looks like a yogi with long hair/dreadlocks worshiping Shiva (Adiyogi).

Asanas found in dance as well as yoga. 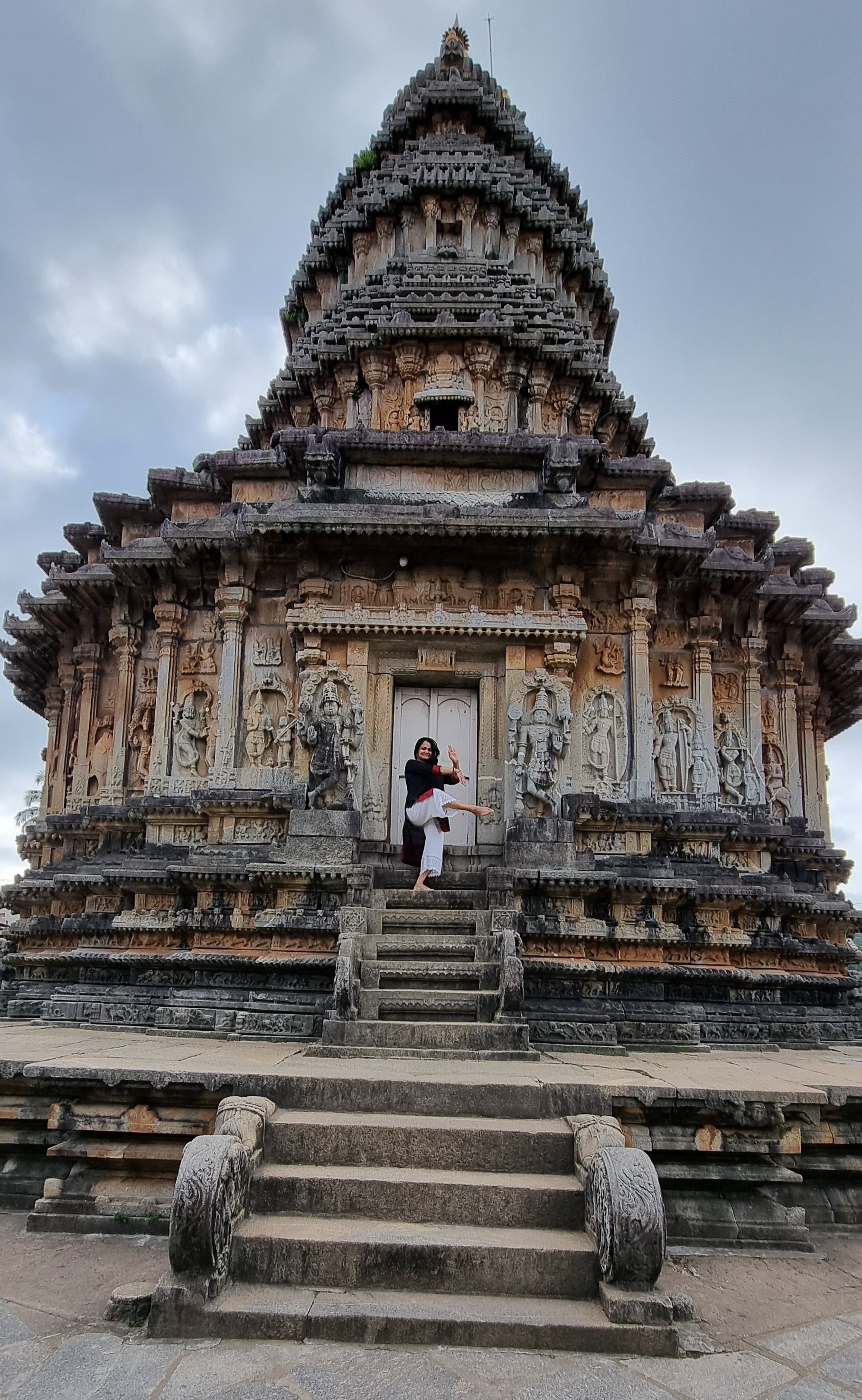 Natrajasana for my dance teacher.

If you want to learn more about this temple, here’s an interesting paper I found about the temple: Aspects of Observational Astronomy in India: The Vidyasankara Temple at Sringeri.  Another temple I had a wonderful time at was the Perur Pateeshwara temple, check out that blog too.