When Your Back Hurts

So here are a set of moves that you should do in the sequence given below.  You need to hold each posture on each side for about 10 minutes.  So you do need to set aside about an hour to do this every day.  Yes, do these every day.  If you do this set of postures while you are experiencing the pain, you will get instant relief.  Tried and tested.

I only had a makeshift yoga belt with me when my friend and I found time to take these pictures.  You can use a stole or a dupatta, basically anything long enough to use for these asanas. 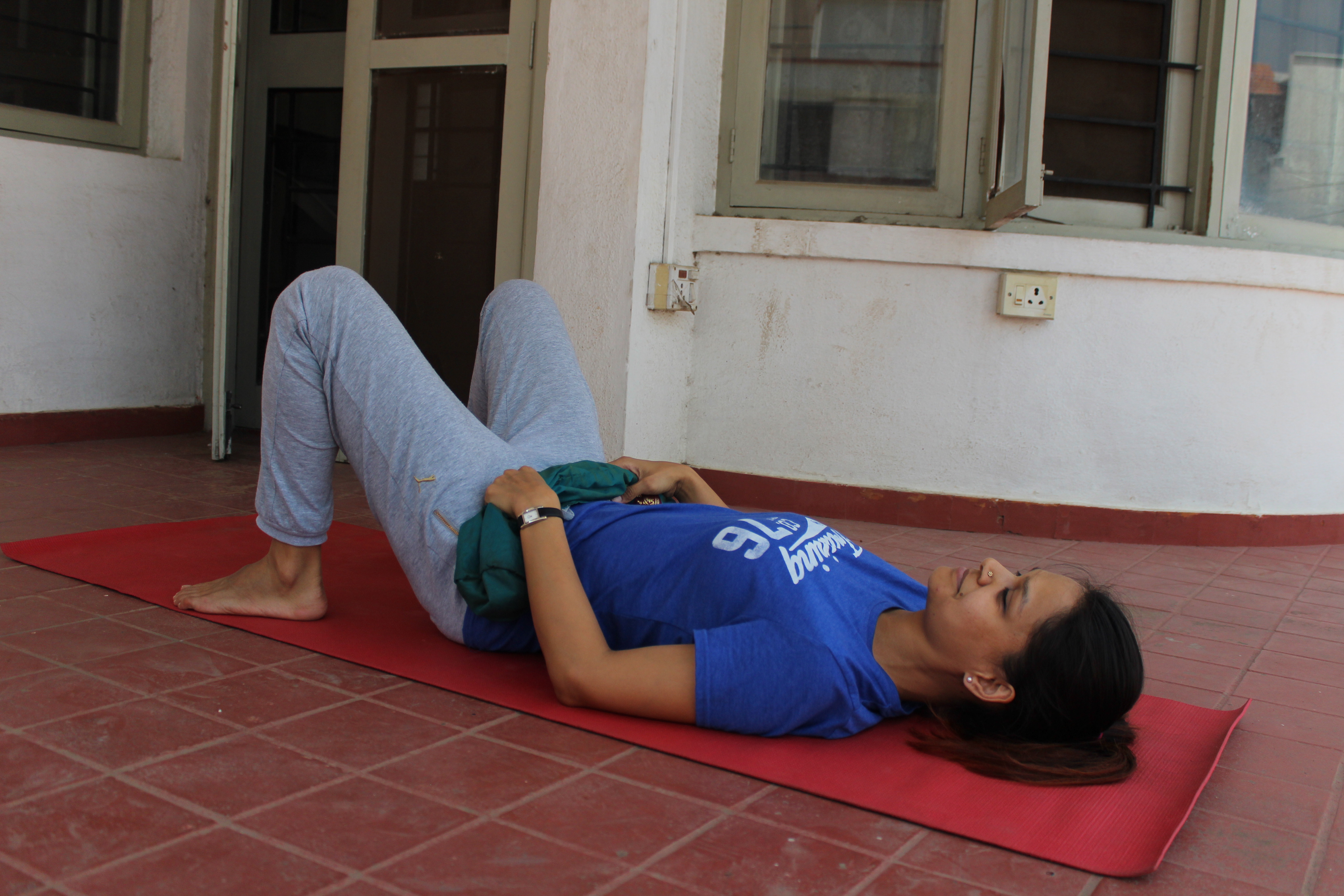 2. Next loop the belt around one foot and straighten the leg.  You lower back should still lie flat on the floor.  Push the heel out.  Keep the toes inclined towards your face.  Also, people tend to think that the closer they can bring the leg to the torso, the ‘better’ it is.  That is not true.  You must keep the leg either straight up, perpendicular to the floor.  If that’s too intense of a stretch for you, then you can bring the leg closer to the floor, until the stretch becomes tolerable.  The heel must always stay extended outwards.  Knee must be locked.  Note: the other leg is bent with the foot on the floor.  This is intentional and you must practice just like this. 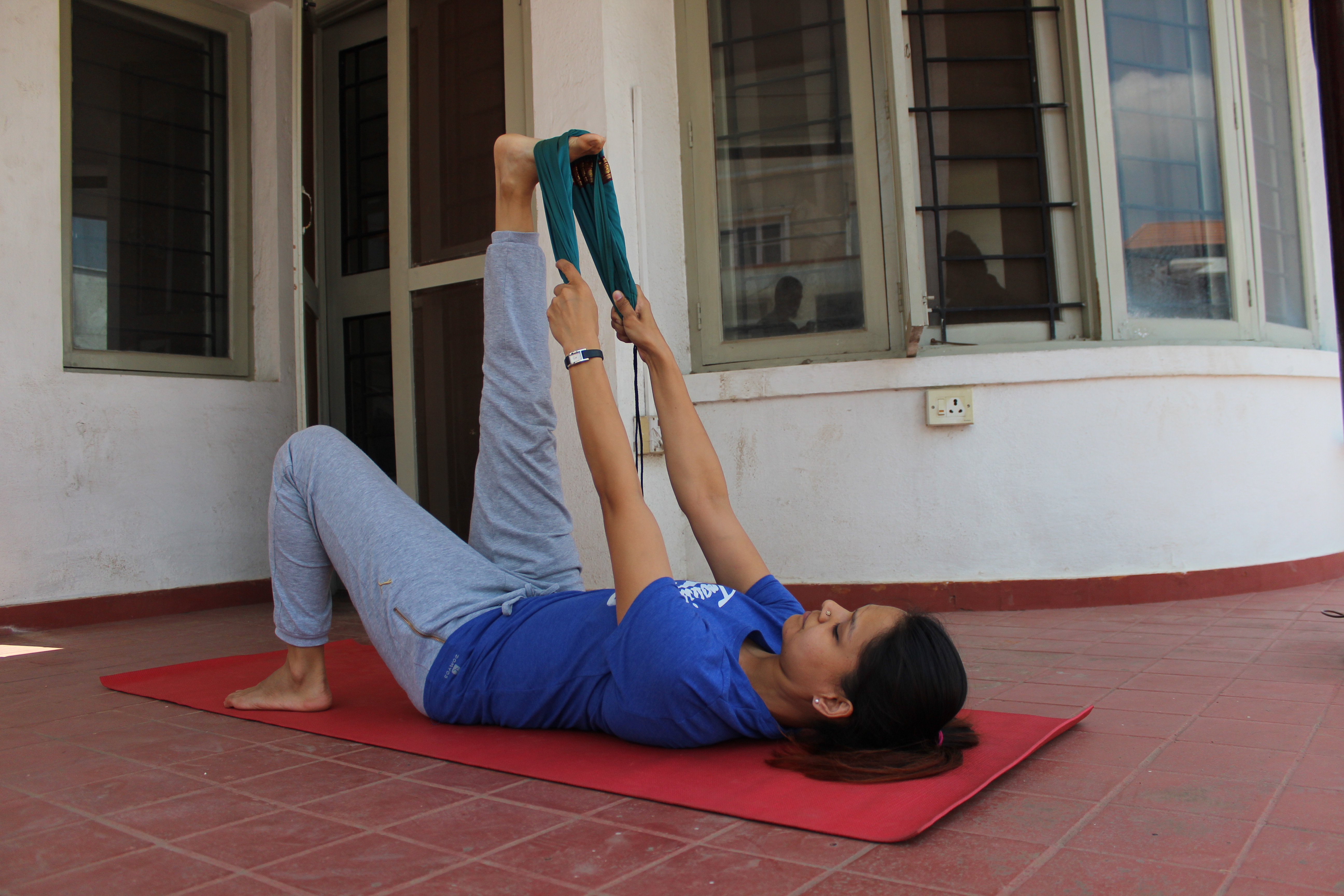 3. Straighten the leg which is on the floor.  Do this by slowly walking it out, and not by lifting it up and pushing it forward.  You have to do all these movements slowly and carefully, after all, you want to be careful with you back.  In this posture, both legs mimic each other.  Knees are straight and locked.  Heels are pushed out. 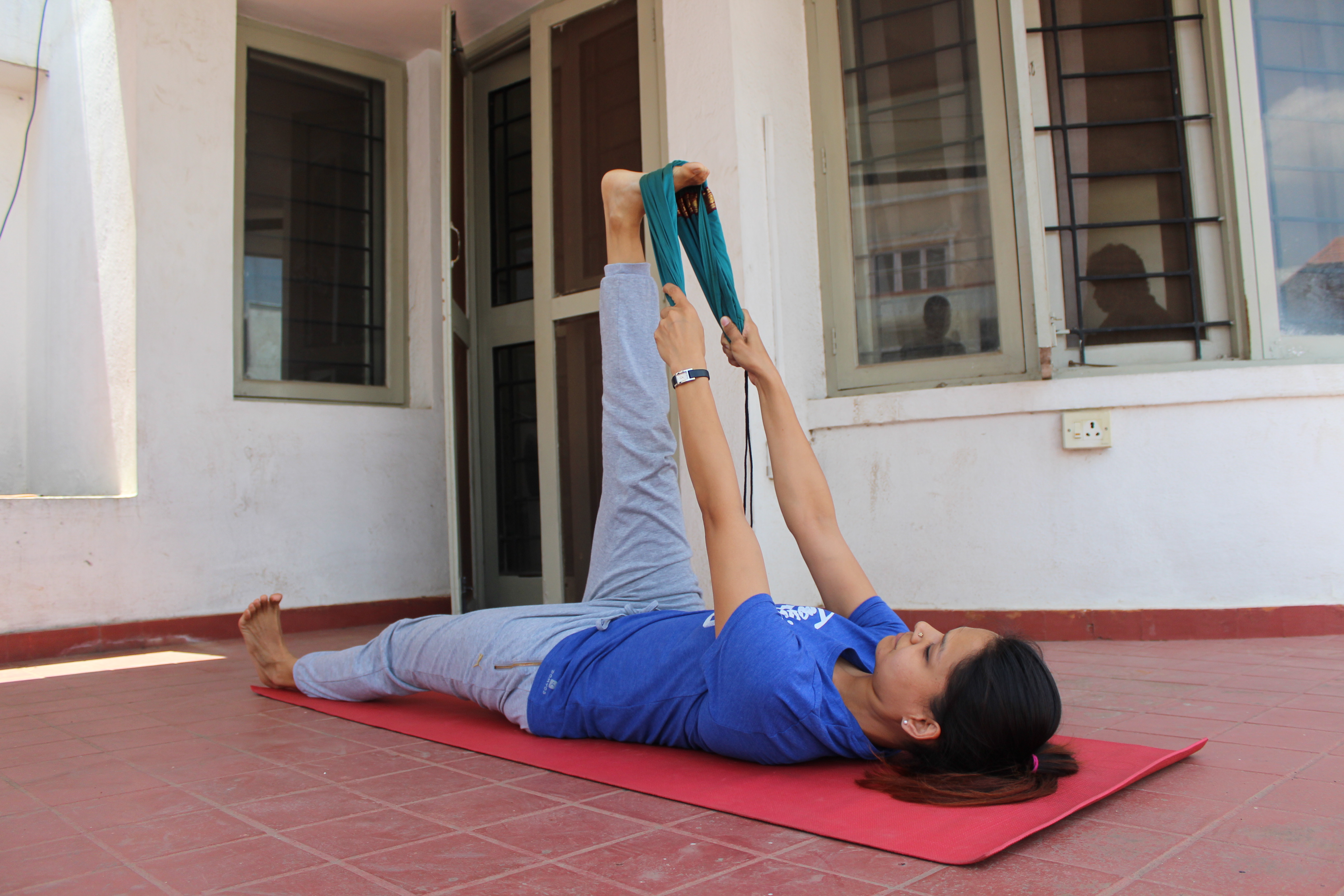 4. Next ease our leg on to the floor.  Again, no jerky movements.  Also, if you are unable to get the leg all the way down to the floor, you can use a pillow or a small table to rest you leg on.  Heel pushed out.  Knee locked.  And the torso should be flat on the floor.  Usually there is a tendency to lean to one side because of the weight of the extended leg. 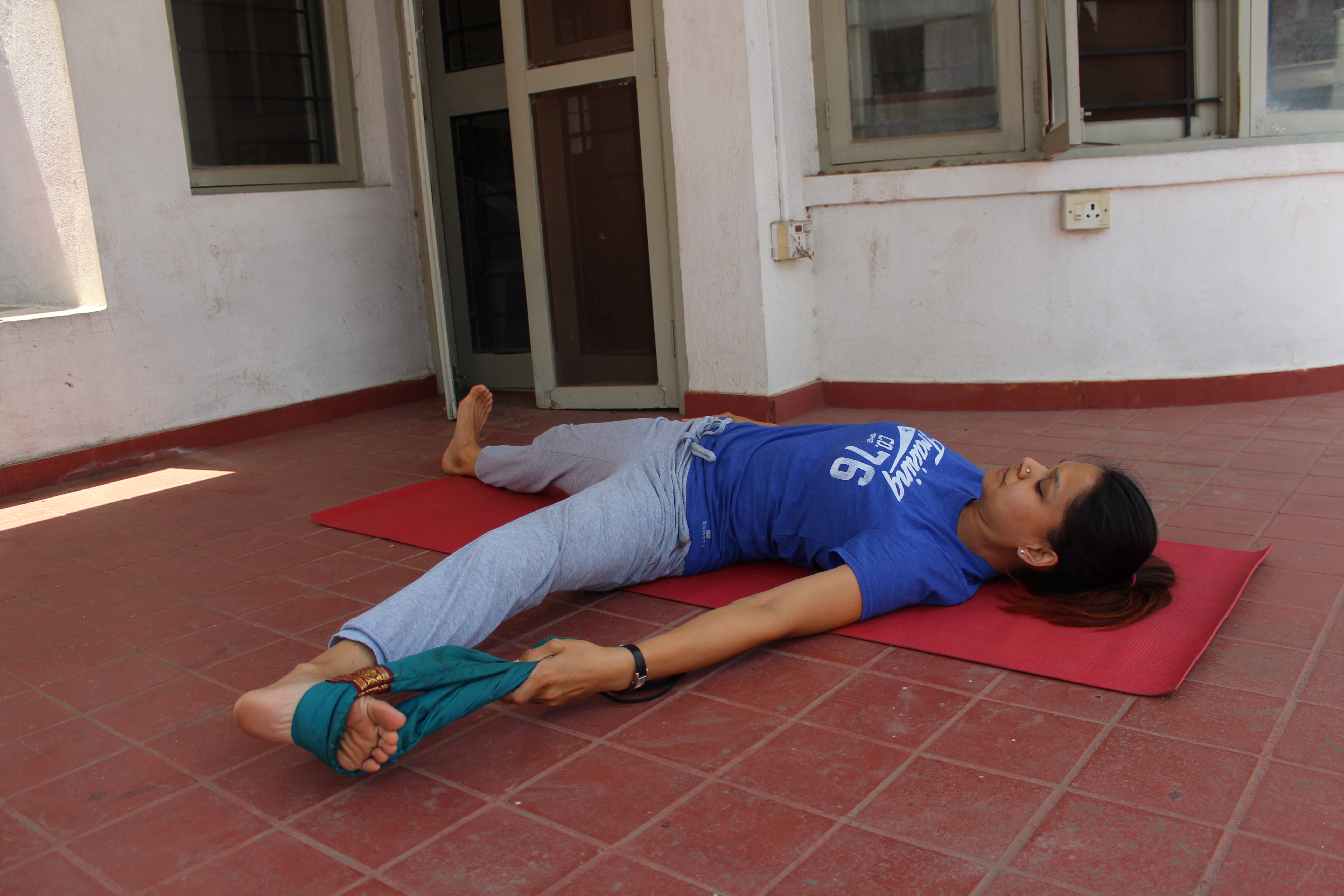 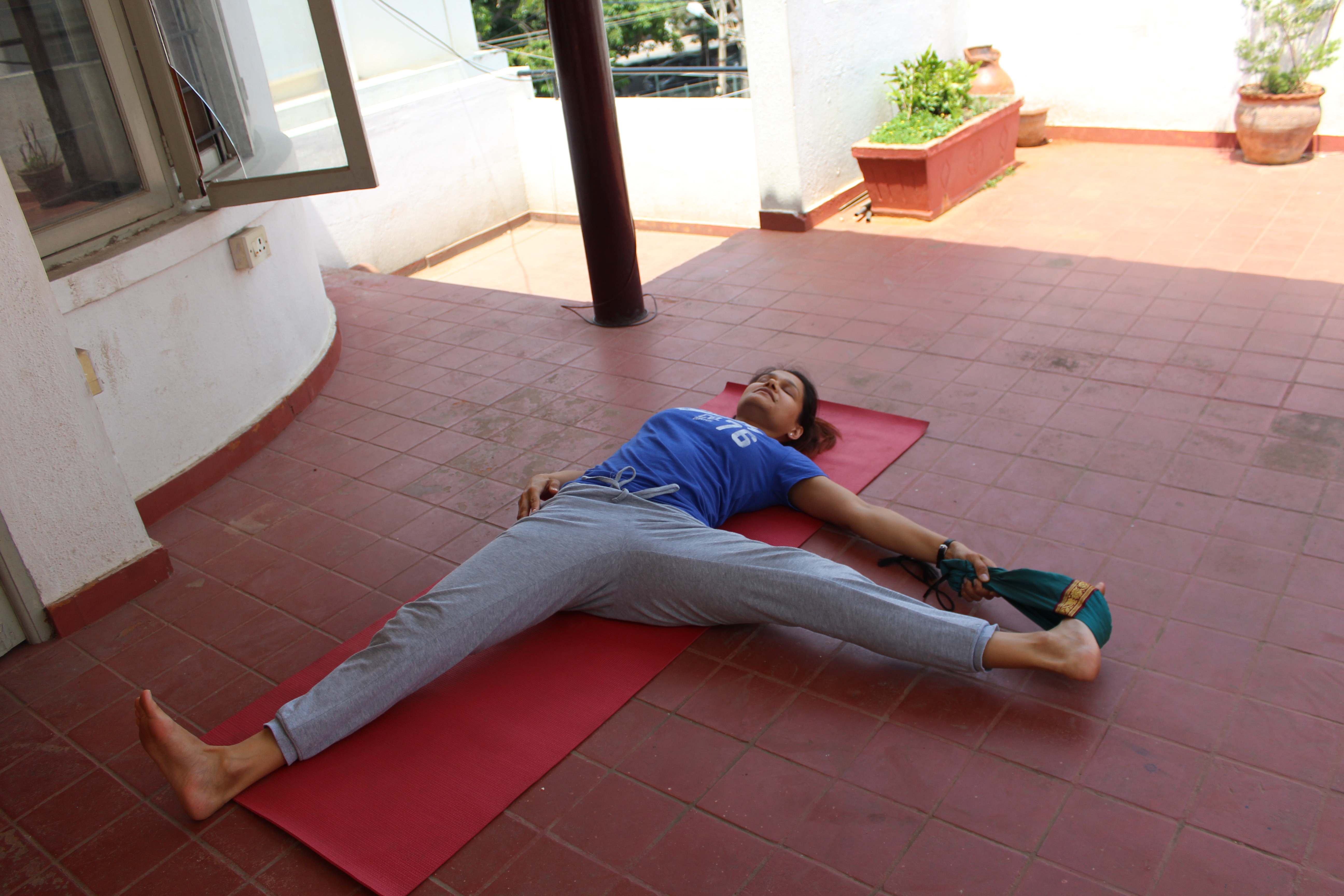 5.  Bring the leg back up and this time, ease it to the opposite side.  Only 30 degrees to the other side.  So lower back is still in touch with the floor.  The opposite leg should stay active. 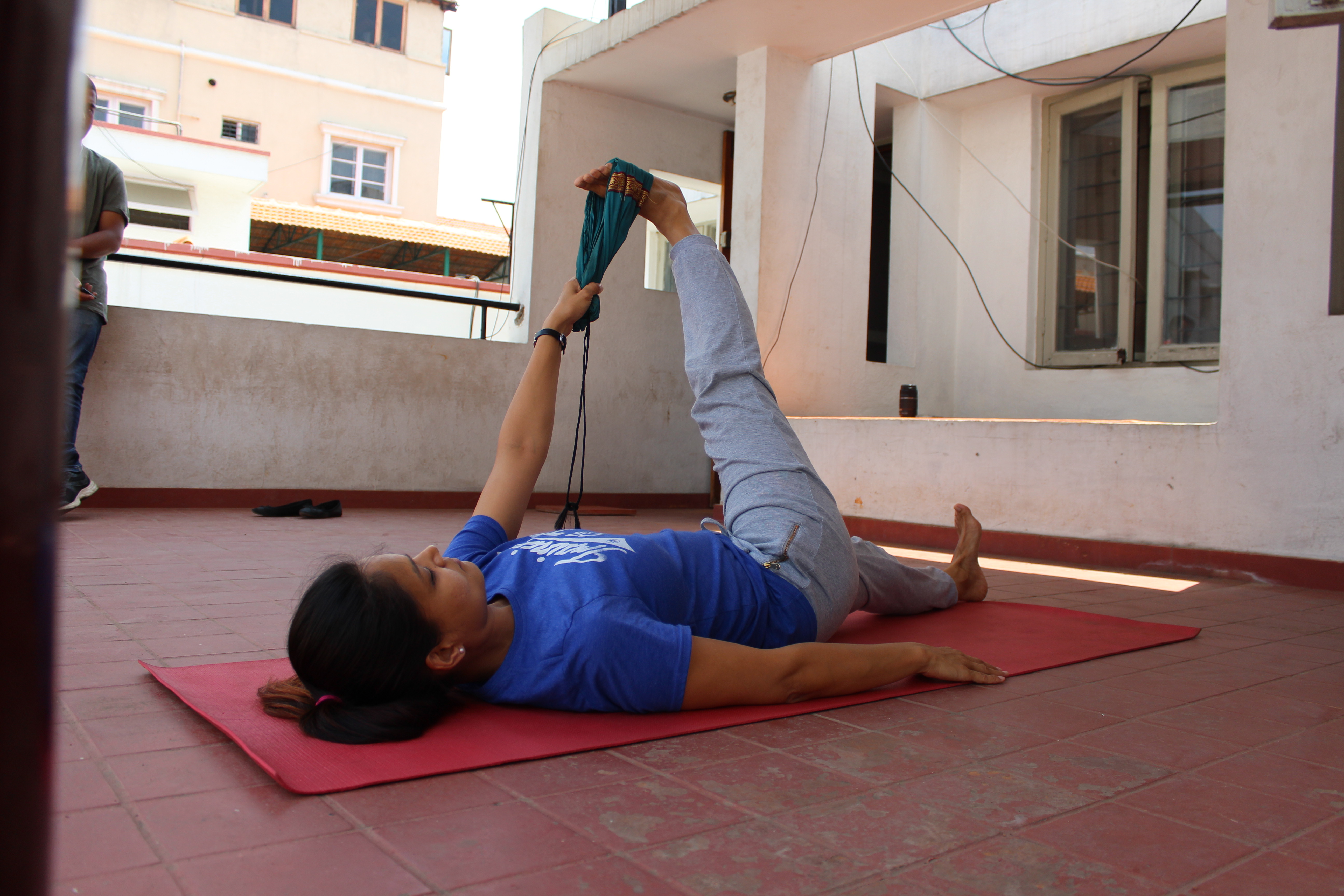 6. And finally, the posture which gives the most relief.  For this one you will have to tie the ends of the belt together.  Then insert a leg through the loop and put the opposite shoulder through the other end of the loop.  Almost like you’re carrying a shoulder bag.  Allow the leg to fall sideways.  It doesn’t matter how close your knee/thigh/leg is to your torso.  What matters is how relaxed your leg is. 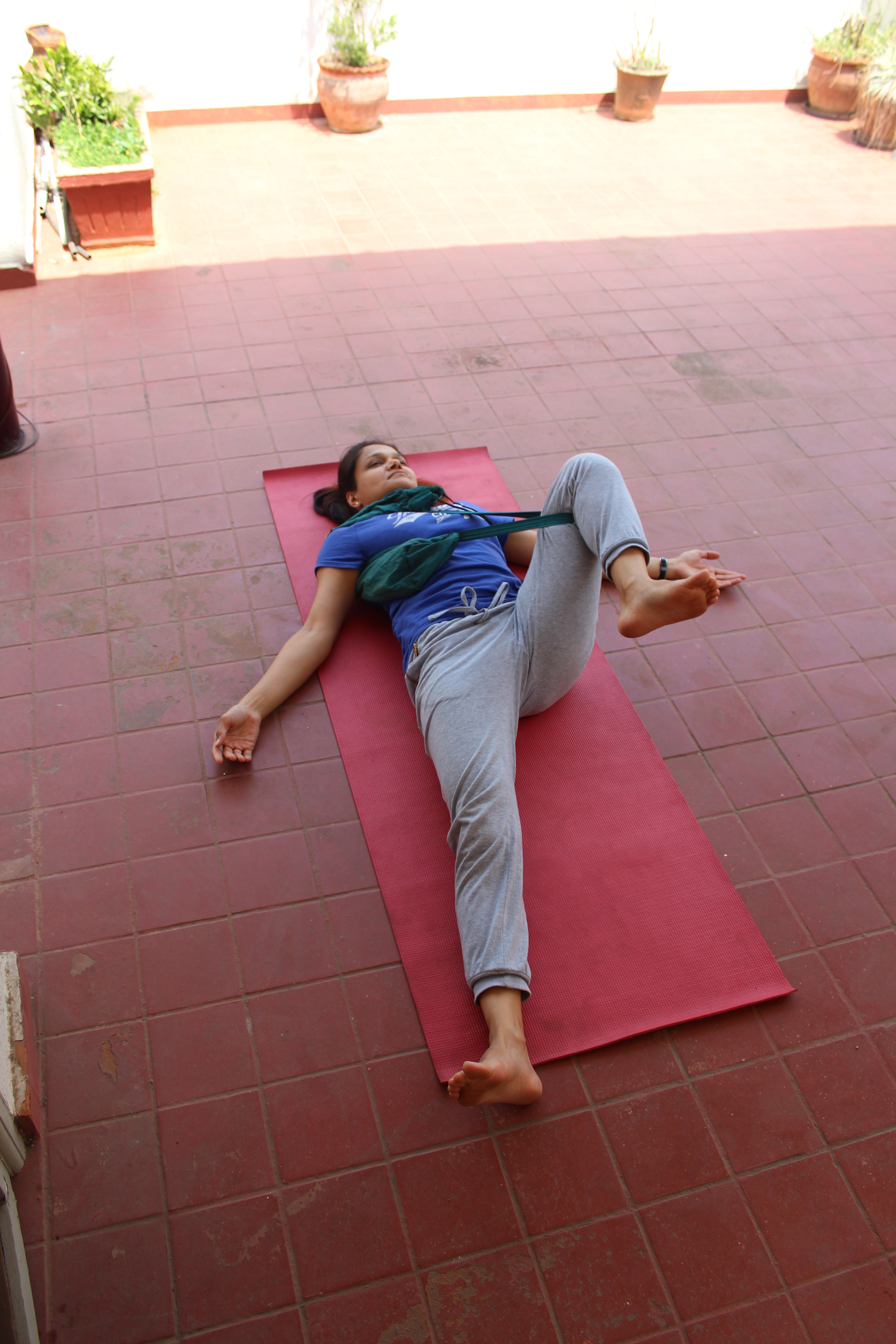 Thanks Sujith for the photos. 🙂

What to Do When Shit Happens

I came back from two months in the Netherlands to a car with a dead battery.  I asked a friend to help out and we got the car started somehow and temporarily fired up the battery.  I remember him telling me to get the battery replaced sooner rather than later because it was bound to die again sometime.

But you know how there are always a million things to do.  I should’ve heeded his words, because last night my car broke down.  It was raining cats and dogs.  There was the ubiquitous Saturday evening traffic.  And I was somewhere on Airport Road.  I called a friend who lives in RT Nagar, and who was supposed to be home studying for an exam.  But he was in Koramangala.  I was actually on my way to a friend’s birthday party and called her for help.  They tried to come to my rescue but the rain and traffic and construction work rendered that impossible.

And on top of everything, I was scheduled for a late night movie with a friend, and chances of me making it to the party or to the movie seemed bleak.  This was the last thing I needed after a particularly gruelling day at work.  To make matters worse, there was no Maruti workshop close by (and getting there in the rain and traffic would be an achievement in itself).  Besides it was close to 9 pm and everyone had shut shop to enjoy the weekend.  And the movie was supposed to start at 9.50 pm at Lido (yes, we went to watch Dhrisyam).

And as most of my friends will tell you, I’m very short tempered.  And the temper kept building up slowly and steadily as I tried to contact my dealer (who informed me that the workshop is closed on Sunday, so they wouldn’t be able to help me out tomorrow either).  And while in the throes of frustration I asked myself ‘Why is this happening now?!  Why is this happening to me?!  Why me?! Why me?! Why ME?! WHY me?!!!’  And eventually the question became – yes, why is this happening?  It can’t just be the universe trying to wreck my Saturday evening.

Two young boys on a bike stopped and asked me what was wrong (except they spoke Kannada and an undecipherable combination of English and Hindi).  In answer to ‘Praablem?’, I tried to start the car and repeated multiple times: ‘Dead.  Totally dead.’

By now the rain had miraculously stopped.  Since we had no language in common, the two boys actually got off the bikes and acted out a little scene showing one of them pushing the car and the other one trying to start it.  Then they gestured wildly for me to get out of the car.  Busy road.  The only danger I could foresee was them driving off in my car (was that even a clear and present danger?).  Anyhow, I got out of the car, and into the back seat (probably not the best move if you’re afraid your car is about to get stolen).  They started their little jib and lo and behold the car started.  My joy knew no bounds.  And the only way I could express myself to these boys was to thank them a million times.  Their last words to me were – ‘No stop.  Neutral.  Car on.  Battery change.’

I quickly got into the car and sped away.  I could still make it to the movie.  I could park my car in my building and have my friend pick me up.  It was 9.15 on a rainy Saturday.  I was heading to Lido from Airport Road.  My friend was coming from JP Nagar.  Trying to make it to a 9.50 movie was ambitious to say the least.  To make matters worse, there was a traffic jam right outside 1 MG.  We decided to park the car and make a run for the movie.  We literally ran to Lido mall…only to find that the movie was 20 minutes delayed!  So we wouldn’t miss the beginning.

So, what did I learn?

1. Accept that shit is happening.  Don’t waste time in questioning why it’s happening.  Leave that for later.

3.  Help is always around the corner.  Even from unlikely sources.

4.  Change the perception to change the situation.